Think back to the first time when you heard a Coldplay song. Seems like just yesterday, right? Well, the band has been together now for 20 years. Twenty years!

My how time flies.

Last month Joel Marion and I went to a Coldplay show in Denver. It was good, but it could have been better. It felt superficial and sugary, and that the band was avoiding the harder path of going deep and emotional.

I’ll talk more about that next month (and what that’s important), but for now, here are…

My 3 Favorite (Marketing) Moments from the Coldplay Show

1. The Crowd Engagement Balls (that’s what she said)

This was the highlight of the night for me. Midway through the concert a team of backstage show runners brought out dozens of giant colored balloons. It looked like an invasion of Stability Balls. The balls were released and the band launched into their latest single, Adventure of a Lifetime.

The crowd spent the next four minutes more engaged than in almost any other song of the night as we swatted the balloons around and jammed out to the disco-ish track.

Watch them play the song at the Met Life stadium and release the balloons here (3:19 is magic!). 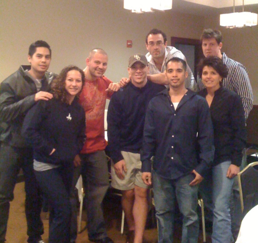 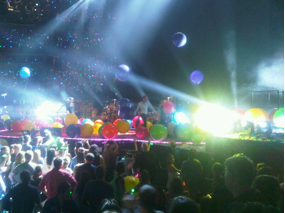 What’s the marketing lesson? From Facebook Live videos to Reddit Ask-Me-Anything (AMA) sessions to live course creation (like I’ll be doing on Ambitious.com this month), marketers and gurus are becoming more and more engaged – in real time – with their customers and target audiences.

We all want to be part of the show. It builds more connection, creates stronger memories, and makes for great cocktail stories. Imagine how excited one of your 500,000 fans will feel when you answer one of their questions live on a Facebook video stream. That’s how you build super-strong connections and have a bigger impact than ever before.

2. The Storytelling is ALL We Remember

Chris Martin is an incredibly dynamic lead singer. I didn’t expect it. After all, the first time I saw a Coldplay video was for the song Yellow, where Chris looks like an awkward, gangly British bloke. But from start to finish he dominated the stage with his singing, stories, and stomping all about.

At one point in the show he introduced the band and told a story about each of them, and I can’t remember what song they played, but I can almost recite the story line by line.

3. They F’d Up Early and Laughed About It – You Have Unlimited 2nd Chances

It was the third song into the show and lead singer Chris Martin ran down the long center stage. Suddenly he stopped and started laughing.

“Ah, I f’d that up” he said. The crowd went nuts. The band started again. NO ONE CARED. This is a big lesson for so many beginners, and even us old folks.

If Michael Vick, Britney Spears, Donald Trump, Hillary Clinton, and millions of other “fall-from-grace-and-climb-back-higher” stories have taught us anything, it’s that we can fail catastrophically and the world will still give you a 2nd chance.

There are very few unforgiveable mistakes. So when you make one, laugh it off.

No one will hold it against you. Heck, no one will remember anyways. People are too busy caring about themselves to care about your screw-ups.

And besides, even if they do remember your mistakes, like I remember the one Coldplay made, they simply make for good cocktail party and newsletter stories.

So if something bad ever happens, laugh it off, get back on track, and do what you were born to do – change some lives, have a big impact, and leave your legacy on this world!

Act in the face of fear to build extreme self-confidence. Fail forward. Learn your lessons. Move on. Keep growing. Never stop. Celebrate each victory and build on your momentum.