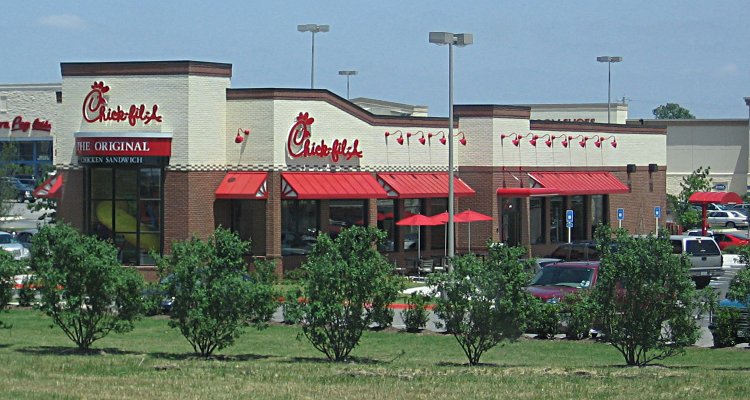 Nobody was expecting this…

Last week, Chick-fil-A introduced its first app called One App and in three days the app was downloaded over 1 million times, making it the #1 downloaded app in Apple’s free-app store last week.

If you’re wondering what the cluck happened? I’ll tell you…

With every app download, Chick-fil-A promised customers one free chicken sandwich. A bold move by the small chicken chain.

But here’s the thing… lots of other businesses give away free samples, why is Chick-fil-A any different?

Lesson 1: The Art of Giving Away Free Samples

One of my favorite articles by Jon Goodman is his “metal spoon” story, which he tells here on his blog Viralnomics. The metal-spoon story illustrates the right way to give stuff away for free.

In front of a green sign there stood two girls, somewhere around 20 years old, dressed in black slacks and a white button up shirt with a tray. On the tray was a collection of tiny paper cups, the kind they use to offer free samples of food. As we approached, one girl said “tiramisu.” Even though she could have easily said “eat my shoe?” and I still would have tried some I was so hungry.

We both grabbed a paper cup and looked at the dessert, it wasn’t finger food and needed a utensil.

The girl said. I picked up a metal spoon and started to walk away but immediately stopped myself. They got me. I was trapped.

The goal of giving away a free sample is to let a passerby try your food and ideally give yourself an opportunity to speak with them. If she gave me a plastic spoon I would have walked away without even getting the name of the restaurant.

But because the spoon was metal, I was forced to stay so that I could return the metal spoon to the girl upon finishing.

Chick-fil-A is using a similar strategy with its app. By giving away a chicken sandwich in the form of a virtual voucher that customers receive after downloading the app, this forces customers to have to go into the restaurant to redeem their gift.

If you’ve ever had to run to the drug store to pick up maxi pads for your girlfriend, you’ve probably found yourself also buying a lot of “essentials” — pack of gum, deodorant, paper towels — anything really to disguise your intended purchase.

Lesson 2: Pretend Like Customer Autonomy is a Step Toward Luxury

My younger sister was complaining that some of the new workers at her old job (a local pizza place) are rude. She said, the employees spend most of their shift with their heads down, staring at their phones, ignoring customers. My sister is 20.

The funny thing about this scene, which I’m sure is common at most fast food restaurants today, is when these kids do finally lift up their heads, they’ll probably see two things: 1) their job will be non-existent 2) they’ll see their former customers staring at their phones, doing their job, without their help.

We’ve already seen McDonald’s add self-service screens to their restaurants. Why not cut costs even further and have customers simply order from their own personal devices instead? That’s what Chick-fil-A, Taco Bell, Starbucks, and many other restaurants are in the midst of doing. The future of fast food is simple: Place your order on your smartphone, pay on your smartphone, go pick up your order or have it delivered. No human contact required.

Lesson 3: Why Should Your Customers Be First in Line?

What do Chick-fil-A and Apple have in common?

When either company decides to open a new store or launch a new product, customers are willing to camp out in tents to be first in their stores. Chick-fil-A is notoriously good at leveraging early momentum whenever they launch something new. When a Chick-fil-A restaurant opens, the “First 100” customers that meet the required rules and regulations win a Grand Prize of one Chick-fil-A Meal per week for a year.

Whenever you’re launching a new product, there will always be spikes in sales over the first few days of your launch and you’ll see the biggest spike in sales during the last day, right before the deadline. Most businesses know how to capitalize on deadline day, but not many captitalize on day one. Chick-fil-A has mastered the opening-day launch. Having a big opening day only helps snowball the rest of your launch. Ryan Holiday did a great job of this recently with his new book, Ego is the Enemy that’s launching soon.

1) All free samples should be served with a “metal spoon.”

2) Customer’s like to feel in control even if it means they’re doing half the work themselves.

3) Reward your first customers because they’re who get your sales snowball rolling.

The Visual Power of Formulas

I’ve mentioned before the visual power of ETR Editor Craig Ballantyne’s 10-3-2-1-0 formula. I came across another formula that I think you’ll really like.

Drew Houston, the founder of Dropbox, was recently interviewed by The New York Times and asked what advice he had for recent college graduates. Here’s what Houston said:

The tennis ball is about finding the thing you’re obsessed with. The most successful people and successful entrepreneurs I know are all obsessed with solving a problem that really matters to them. I use the tennis ball for that idea because of my dog, who gets this crazy, obsessed look on her face when you throw the ball for her.

The circle is really about the idea that you’re the average of your five closest friends, so make sure to put yourself in an environment that pulls the best out of you. And the last is the number 30,000. When I was 24, I came across this website that says most people live for about 30,000 days. So you have to make every day count.