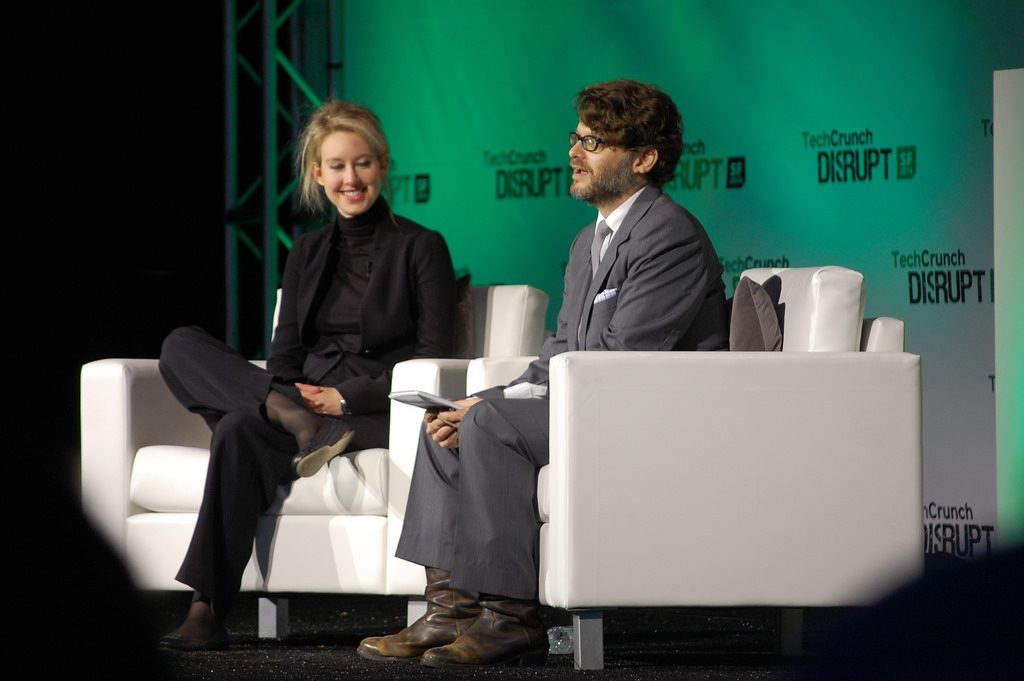 “I think that the minute that you have a backup plan, you’ve admitted that you’re not going to succeed.”
—  Elizabeth Holmes, CEO Theranos

Yesterday, it was announced that Holmes’ net worth is now zero.

How is that possible?

Ever since The Wall Street Journal published an exposé, putting into question the effectiveness of Theranos’ blood tests, the company has been under fire.

In light of allegations of fraud and several ongoing investigations, Forbes decided to revalue Theranos. “Forbes spoke to a dozen venture capitalists, analysts and industry experts and concluded that a more realistic value for Theranos is $800 million, rather than $9 billion,” says Forbes.

Because Holmes owns common stock in Theranos, while her investors own preferred stock, which gets paid out first if Theranos decides to liquidate, Holmes stake is essentially nothing.

Now it’s not every day you see someone’s net worth plummet like Holmes’ just did so I can understand the media frenzy. Everyone wants their schadenfreude. What I can’t understand is why some people are calling Holmes ‘worthless.’

Some tactless writer at Vanity Fair went as far to write this emotionally-driven headline:

“Elizabeth Holmes, Once Worth Billions, Is Now Worthless.”

I noticed this morning the headline changed to “Theranos Founder Elizabeth Holmes, Once Worth $4.5 Billion, Is Now Worth Nothing.” Not as bad, but still pretty gutless.

I shouldn’t have to say this but I will, a person’s net worth does not determine that person’s value in the world. Every human being is worth something regardless of how much money is in their bank account.

Now that we’ve cleared that up, I want to talk to you about backup plans.

Holmes said publicly in an interview that she doesn’t believe in having a backup plan. Does she regret saying this now?

It depends what you think the value of having a backup plan.

Former professional boxer and undisputed world heavyweight champion, Mike Tyson, famously said, “Everyone has a plan ‘till they get punched in the mouth.”

I agree with Tyson, for the most part.

You can predict as many possible outcomes as you can think of but it’s not until you’re in the ring and someone starts throwing punches that you know what course you need to take.

That said, having preplanned solutions to possible outcomes, I think better prepares you to make smarter and faster decisions when you’re thrown into unfamiliar situations.

Though the solution you may have prepared solves a slightly different problem than the one you’re faced with now, the combination of maybe two or more of your preplanned solutions could be what ends up solving your problem.

Dwight D. Eisenhower once said, “In preparing for battle I have always found that plans are useless, but planning is indispensable.”

The value of planning is simple. When you plan you build neuropathways in your brain that can lead to potential solutions later. This is why the world’s top creatives immerse themselves in all different forms of art, not just their own. It’s why athletes cross-train. The more experiences you have at your disposal, the more potential solutions.

So does Holmes regret not having made a backup plan?

Probably. It was also probably a good sound bite at the time, especially coming from one of the youngest female billionaires.

What could Holmes have done differently?

This is a tough question, especially considering the lack of information that has been released to the public, but I can tell you what most CEOs should do before any major product launch or public offering. Follow what Ryan Holiday calls apremortem.

“In a premortem, a project manager must envision what could go wrong — what will go wrong — in advance, before starting. Why? Far too many ambitious undertakings fail for preventable reasons. Far too many people don’t have a backup plan because they refuse to consider that something might not go exactly as they wish.

“In fact, I think more companies need a Chief Dissent Officer, someone to shoot down the bad ideas that our blind spots and naive optimism too often obscure. They can catch us when we are puffed up with visions of our own greatness and preordained success,” says Holiday. Click here to read Ryan’s full article.

As far as rebuilding her reputation and Theranos’ image, Holmes might consider taking a page out Donald Trump’s book. Trump has had some of the worst favorability ratings in history. But he recently just passed Hilary Clinton in favorability in National Polls, and some pundits are now predicting his favorability is only going to climb as we approach November. If that’s true, there are some lessons to be learned about turning a bad reputation around. For now, the best advice I’ve read on how to turn a bad reputation around comes from the Harvard Business Review, they recommend you follow these three steps.

Finally, remember what ETR’s editor, Craig Ballantyne, said in his book, The Perfect Day Formula: For every obstacle in life, you should have two solutions. What that means is sitting down on Friday, looking ahead to next week, and identifying every major distraction and temptation that will arise or get in the way of your success.
For example, if you’re trying to lose 10 pounds before Independence Day, and you know next Wednesday includes a 4-hour boardroom meeting where the only sustenance will be Subway sandwiches, soda, chips, and large chocolate chip cookies, then you need to pack your own lunch or eat before and then tell everyone at the meeting that you won’t be joining them for lunch.
Likewise, if you’re trying to pay off your credit card debt but have been invited to walk the Miracle Mile shopping scene in Chicago on Saturday afternoon, then leave your credit cards at home or tell your friends that under no circumstance are you allowed to buy anything.
Planning ahead pays off. But planning alternatives in case the perfect situation goes awry, gives you the insurance you need to keep your plans on track.
Posted in Careers, Entrepreneur, Wealth
This error message is only visible to WordPress admins