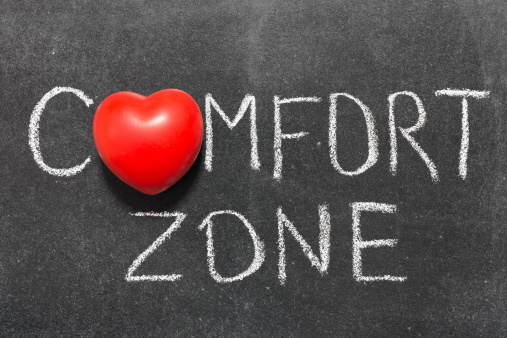 Well that was interesting. Four months ago, Bedros got us a dinner reservation at the hotspot, Gordon Ramsay Steak, here in Vegas. Last night, after an 8 hour shift of powerful masterminding, it was time to unwind and soak up the inimitable Vegas ambiance.

Get Out of the Comfort Zone

Ramsay almost became a professional soccer player in Scotland, but he badly injured his knee. It was devastating, because soccer was his true love, and his success in the sport helped him deal with an agonizing youth spent fearful of his alcoholic, womanizing father.

After he was forced out of ‘football’, he decided to take a big step of out his comfort zone and went into culinary training. He actually referred to this decision to become a chef as, “a complete accident”.

Well, it seems to have worked out just fine for him. It wasn’t easy though, as many people around him just wanted him to keep on drinking and going to the pub, and to stay mired in the muck of his Scottish hometown.

I experienced the same feeling and peer pressure. My friends wanted me to go out boozing and tomcattin’ three nights a week. Almost every personal trainers at the gym where I worked was happy to just goof off between clients, rather than continuing to learn and improve. Even my mother told me to go back to school so I could get a $40,000 per year job as an accountant.

But you must not harbor any bitterness or resentment against those that try to hold you back. They know not what they do.

Stay strong and never give up on what is important to you…even if that means a big step out of your comfort zone.

Once you take that BIG leap, commit to adding value and learning high-competency skills, like selling. It’s essential to success. Of course, you need someone to support you, hold you accountable, and show you the way.

After culinary school, Ramsay sought out the best mentors, even though they had a reputation for being temperamental, harsh taskmasters. He started at the best kitchens in London and eventually moved to Paris to study under the legendary Guy Savoy and Joel Robuchon (all the names you see attached to restaurants here in Vegas).

Ramsay worked for 15 years under the tutelage of these great names, and he was finally rewarded with his Michelin stars for his own restaurants. From there he became another “overnight & exponential success story”. Today his empire spans the globe.

(And last night showed me why his success is well deserved!)

Like Ramsay, I sought out the best mentors I could find. First I hired Tom Venuto who showed me how to set up my website for maximum sales, affiliate support, and search engine optimization.

Next I joined Yanik Silver’s Internet Marketing Mastermind group. I stayed in that for almost four years, meeting the biggest names in the industry, and eventually becoming great friends with Matt Smith, who is now my business partner and biggest mentor of them all.

Matt has taught me how to build a business, how to manage and grow team members, how to concentrate on what counts, how to create great offers, how to leverage opportunity, how to live a great life, and even how to meditate. He is like the big brother I never had.

Years later, after Tom, Yanik, and Matt had helped me achieve financial success in the fitness industry, I was able to buy my dream business with Matt’s help and connections. My dream, as I told Tom Venuto back in 2006, was to own EarlyToRise.com. Five years after sharing that vision with Tom, I bought ETR from my long-time virtual mentor, Mark Ford.

By necessity, owning ETR demanded that I become a better writer in 2011. It was time to stop with the lazy “listicle” articles that populate the Internet and instead do a deep dive into learning how to write a great essay. The 150,000 readers of ETR demand great content five days a week. They won’t settle for mindless clickbait drivel you can find anywhere.

It was a big challenge and a bumpy ride for me to make this big leap in my writing. I was often frustrated, thinking, “But I did my best…what more do they want?”

After I stopped sulking, I’d take the feedback from readers, and from Mark, and put more time into additional re-writes of each essay. With practice and persistence, in the three years since taking over ETR, my writing has improved, and still does.

I’m a lucky man. As I sit here in a suite in Vegas writing to you, about to start four days of incredible masterminding with positive people from all over the world (followed by the best celebratory dinners you could buy), I realize that I couldn’t have been able to do it without great mentors.

Getting a mentor is the #1 step for success, whether you want to be a world-famous chef, a TV star, a writer, or someone living the Internet Lifestyle Dream, like myself.

If you don’t have a mentor, get one. If you’re stuck inside your comfort zone, get out. If you don’t like where you are, change it.

Change starts here <= Discover how to live the Internet Lifestyle

Looking forward to mentoring you out of your comfort zone,

“Your work is going to fill a large part of your life, and the only way to be truly satisfied is to do what you believe is great work. And the only way to do great work is to love what you do. If you haven’t found it yet, keep looking, and don’t settle. As with all matters of the heart,…you’ll know when you find it.” — Steve Jobs