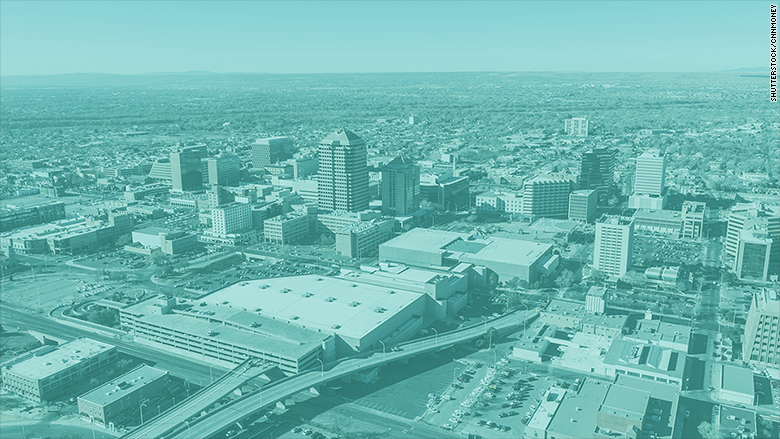 Renters across the nation are being squeezed by rising rents and stagnant wages.
New York City and the surrounding area has seen the most dramatic increase, with rents up 50% over the past five years. However, household income in the area has risen just 8% in that period.
Overall, rents have increased faster than income in all but four of the 70 metro areas, according to a report Monday from the National Association of Realtors.
In some areas, rents may not have gone up astronomically, but income has actually declined, heightening the disparity. It is particularly glaring in Albuquerque, where rents have increased 10% in the past five years. But income in the metro area declined 12% in the period.
It’s a similar story in Providence, RI, Omaha, Tucson and New Orleans, where income is falling even as rents rise (See full list below).
Related: Buffalo’s $1 homes aren’t as cheap as they seem
Nationwide, rents have increased 15% from 2009 to 2014. At the same time, the realtor group estimates that household income has gone up just 11%.
Rents have also gone through the roof in Seattle (32%) and San Jose (26%).
While those cities are home to many high-paying tech jobs, income there has not kept pace either: up 15% in Seattle and 8% in the San Jose metro area.
Related: Cleveland’s rents soar ahead of Republican convention
Cities that have been growing rapidly in recent years — such as Denver, St. Louis and Portland, Ore., — have had some of the biggest increases in rent nationwide.
Among the 70 metro areas tracked by the realtor group, only four cities — Oklahoma, Salt Lake City, Dayton (Ohio), and Detroit — had income growing faster than rent.

(Receive a free copy of Mark Ford’s latest book Living Rich: How to Live as Well as a Billionaire on a Middle-Class Budget. Get it here!)