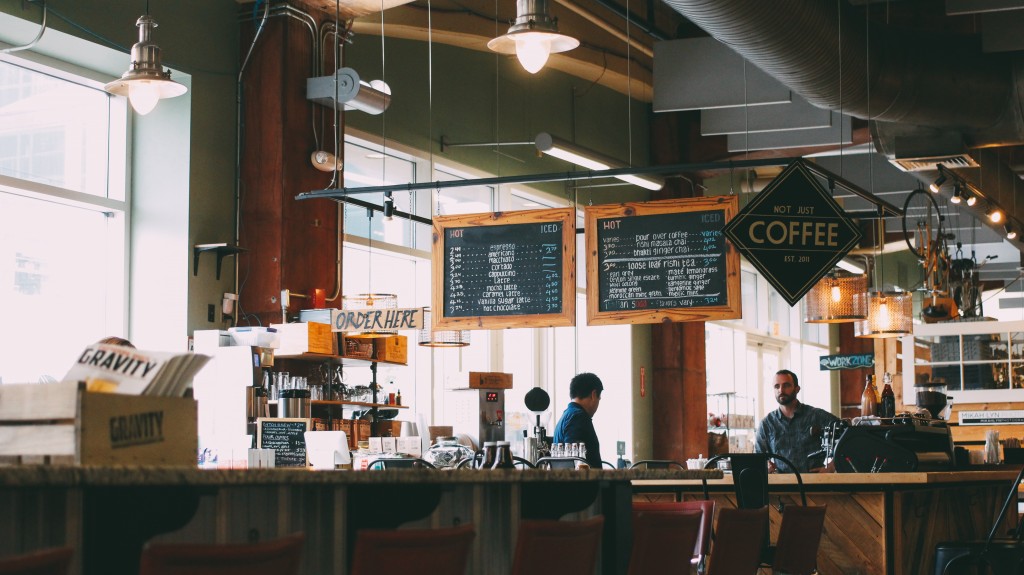 My friend Andrew got his start by making coffee for friends at home.

He dreamed of building his own coffee shop: something grand with wood trim, a brick facade, and a handmade Italian espresso machine.

But he started small. He set up a table at the farmer’s market on Saturdays. He’d sling coffees with his Aeropress. He’d show people the pour over method. And all along, he’d share his obsession for a great roast with anyone who would listen.

Next, he upgraded to a small pop-up coffee cart by the bus stop at Cenotaph Park. He was there Monday through Saturday, from 9 a.m. to 4 p.m. His fans from the farmer’s market followed him. He bought a small espresso machine. The word spread: people started hearing about the coffee fanatic in the park. At first, he wasn’t making much money. But gradually, every day, sales grew. Soon, he had people lined up every morning.

Now, he’s getting to realize his dream: a brick-and-mortar coffee shop located in the old train station. And he has a group of fans that can’t wait for him to open.

Five years ago, building something big like this wouldn’t have been possible. But because he started small, and built his business gradually, he’s confident he has the support to make it happen.

The software entrepreneurs I’ve been interviewing for my upcoming book keep telling me the same thing:

“I wish I’d started by building something smaller.”

We all have big ideas for big things we’d like to make. Maybe it’s a full blown SaaS application, or a 500-page book, or the next viral mobile game.

Build something small, and sell it for $1.

“If you can get anyone to show up and pay you $1, you’ve made it on the Internet.” — Dan Martell

I don’t mean “one literal dollar.” I’m talking about building something that has value, that’s not too complicated, and that you could build and sell in a week, a month, or 3 months.

Maybe it’s a WordPress theme, a little book, an icon set, or a video course. Jason Fried’s first product was a little database program he made in FileMaker Pro. He sold it for $20.

Start with something small.

The advantage is that you’ll no longer be a person with ideas  —  you’ll be a person with customers. You can’t talk to ideas, but you can talk to people. And once you have customers, you’re officially in business.

When you’re dating, you don’t ask someone to marry you five minutes after meeting them. You start small: you invite them out for coffee, take them to a show, or go for a walk. These are small acts, but they’re meaningful. Gradually, your relationship develops into something bigger (maybe even a life-long partnership).

“Starting small puts 100% of your energy into solving real problems for real people.”

Making and selling things is actually quite hard. You can’t just show up and win; you need to ramp up slowly. My buddy Matthew Crist says it’s like people who decide to run a marathon. Marathoners don’t just show up on race day and run 26 miles. They start small, probably with five miles. Even five-mile runs require a training schedule; a gradual ramping up. Running a marathon means lots of practice before the big race.

Part of your training program, as a product person, is to figure out how to build things that people want and need. You can learn techniques from books, but nothing beats first-hand experience. You have to be like the marathon runner: you have to put in the miles. Build something, and try to sell it. No one showed up? Figure out why. It’s a lot better to make your mistakes on the five-mile race, rather than the marathon.

One of my favorite stories, is of a man named Ingvar Kamprad. He started practicing sales young: he would go door to door on his bicycle, and sell matches to his neighbors.

After a while he moved up to Christmas decorations, fish, and ball point pens. Then at age 17 he started his first company. He called it IKEA.

This company had $37 billion dollars in sales last year. It all started with a boy selling matches. IKEA is huge, but matches are small.