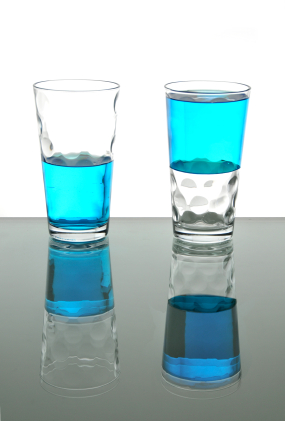 Recently, some readers have written in to say I am too optimistic.

I am an optimist, always have been. Every project I undertake, I expect to see to a successful conclusion. When events take a turn for the worse, I imagine how they will get better. My general attitude is that things will work out, even though – needless to say – sometimes they don’t.

We all walk around carrying mental images of what the world is like and how the future will unfold. Some see the glass as half full. Others do not.

Yet psychologists have discovered that the vast majority of healthy, successful individuals are optimistic, even when it isn’t warranted. It turns out many of us truly are wearing rose-colored glasses.

And now cognitive scientists are revealing that this illusion serves an important function: it turns possibilities into probabilities. Moreover, there is mounting evidence that those who take a pessimistic attitude – even if they are sometimes correct – are risking their careers, their personal relationships and even their health.

As neuroscientist, Tali Sharot writes in The Optimism Bias: A Tour of the Irrationally Positive Brain, “The data clearly shows that most people overestimate their prospects for professional achievement; expect their children to be extraordinarily gifted; miscalculate their likely life span (sometimes by twenty years or more); expect to be healthier than the average person and more successful than their peers; hugely underestimate the likelihood of divorce, cancer and unemployment; and are confident overall that their future lives will be better than those their parents put up with. This is known as the optimism bias – the inclination to overestimate the likelihood of encountering positive events in the future and to underestimate the likelihood of experiencing negative events.”

Studies show that large majorities of us believe we are smarter, friendlier, more honest and better looking than the average person. (And better drivers!) This, of course, is impossible. Most people cannot be better than most people. (Yet generally, we are just as blind to this superiority illusion as we are to our optimism bias.)

However, this self-deception is not only healthy but invaluable. Optimism evokes new behavior that often creates a self-fulfilling prophecy, a prediction that causes itself to be true.

Take the example of two middle-aged men – one an optimist, the other a pessimist – who find themselves in the ER following a heart attack. Other factors being equal, the optimist has a better chance of a full recovery. Not because positive thinking itself changes his prognosis, but because it leads to favorable changes in his behavior. The pessimist feels resigned. But the optimist is more likely to stop smoking, avoid fatty foods and salt, engage in moderate exercise and avoid stress-inducing situations. It’s this change in his actions – not the sunny outlook itself – that improves his chances.

Research shows that when we alter our perceptions and dreams about the future in positive ways, it reduces anxiety and improves physical and mental health. It also motivates us to be proactive. That’s because human brains have a strong propensity to transform what we imagine into reality. Optimistic beliefs – even if they are unjustified – are often the precursor to positive actions.

This is particularly true in my own bailiwick: the investment arena. In my experience, successful stock market investors have an optimistic long-term view that simply doesn’t have an off switch. That doesn’t mean we don’t hedge our bets or take concrete steps to reduce risk and volatility. We do. But we also tend to have an abiding faith in the ability of entrepreneurs, businesses and capital markets to meet people’s economic needs.

In the depths of the financial meltdown in 2008, for example, Warren Buffett penned an op-ed piece for The New York Times in which he encouraged investors to snap out of their funk: “Today people who hold cash equivalents feel comfortable. They shouldn’t. They have opted for a terrible long-term asset, one that pays virtually nothing and will only depreciate in value. Equities will almost certainly outperform cash over the next decade, probably by a substantial degree… Most major companies will be setting new profit records five, 10 and 20 years from now.”

At the time, I agreed with his general assessment. But with the storm clouds gathering – and Wall Street titans falling like flies – I thought his forecast that American corporations would report record profits in five years was insanely optimistic.
I was wrong. And so was Buffett. The companies that make up the S&P 500 were earning all-time record profits just 18 months later. And they have hit new records every quarter since.

Of course, optimism alone – wishful thinking – doesn’t change much. And sometimes circumstances are entirely outside our control. It really didn’t matter that the passengers aboard the Titanic were looking forward to a relaxing ocean voyage.

But in many situations, optimism is the key difference. Here’s why: when you expect a positive outcome and it doesn’t happen, the frontal lobes of your brain go into overdrive, frantically trying to figure out what went wrong and how to make the necessary adjustments. But when you expect a negative outcome, setbacks create no surprise or conflict in the brain. Changes and improvements aren’t forthcoming because failure was already anticipated.

Other people, too, are hugely affected by the expectations you place on them. Employees are more productive when you expect excellence and industry. Students do better when teachers believe they are exceptional, even when they aren’t.

When the Lakers beat the Celtics in the 1987 NBA championship, coach Pat Riley didn’t just predict the team would win again the next year, he offered Laker fans and the world his personal guarantee.

In an interview, Magic Johnson said, “Of all the psychological things that Pat’s come up with, this is probably the best.” Teammates showed up at camp believing their coach’s credibility was on the line. The Lakers did win again. And when a reporter asked Riley during the victory celebration if he could guarantee a third consecutive championship, Kareem Abdul-Jabbar jumped up to cover his mouth. He later explained that he couldn’t take another year of that kind of pressure.

Optimism doesn’t mean we turn a blind eye to negative circumstances – or that we never entertain darker thoughts. But, more than we realize, our expectations influence both our perception of reality and our actions – and so alter reality itself.

There is a huge payoff in seeing gray skies as just passing clouds. Optimists expect to have meaningful relationships, good health and happy, productive lives. They live longer and make better financial plans, and they despair and worry less. They avoid needless anxiety and adjust better to stress.

Optimism is a source of vitality and hope, courage and confidence. It motivates us to set goals, to take risks. It encourages persistence in the face of obstacles.

As Winston Churchill said, “For myself, I am an optimist – it does not seem to be much use being anything else.”

[Ed. Note: Alex Green is the author of excellent books like, “The Secret of Shelter Island: Money and What Matters”, and “Beyond Wealth”, that show you how to lead a “rich” life during trying economic times.]
Posted in Investing, Motivation, Self-Improvement, Wealth and tagged bias, happiness, optimism, pessimism
This error message is only visible to WordPress admins