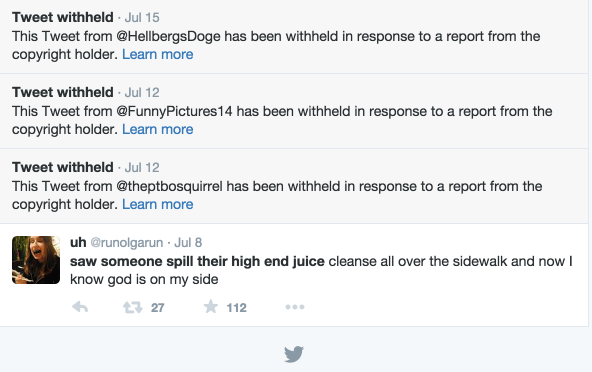 You’ve been warned. “A number of tweets have been deleted on copyright grounds for apparently stealing a bad joke,” says the Verge. Twitter is using its legal authority to crack down on Twitter users lifting other users’s jokes. Full story.

Don’t miss out on free Uber rides. Uber offers a high incentive to sign up for its service—the first ride is free, up to a certain price. But many users don’t realize the free rides don’t have to stop there… 12 things you didn’t know about Uber.

No studio? No problem. Your excuses for why you can’t finish writing your next book, product pitch, sales page, etc. are invalid after you read this story. Rapper Prince Harvey’s new album drops today, titled PHATASS –  an acronym for Prince Harvey at the Apple Store Soho. The rapper recorded the entire album in a Soho Apple Store over four months, hiding his work in the computer’s trash folder.

LinkedIn for benchwarmers. Meet Roe Stimler, a 30-year old former sports agent who started SportJobz (think: LinkedIn for athletes). This week in Las Vegas, Stimler is trying to get people to sign up for his website at the NBA summer league. “You won’t find Lebron James’s profile on SportJobz,” says Bloomberg. More likely you’ll find the next White Mamba.

+ How traditional salespeople can stay relevant in the age of automation.

+ For $22 a night you can sleep in an AirBnB “Van Down By the Water” in Long Island City.

We’ve been e-mailing all wrong. “a major problem with our current e-mail habits is interaction inefficiency,” says Cal Newport. “If you study the transcripts of most e-mail threads, the back and forth messaging will reveal a highly inefficient process for accomplishing the thread’s goal. There’s a simple explanation for this reality. When most people (myself included) check e-mail, we’re often optimizing the wrong metric: the speed with which you clear messages.” Here’s what Cal suggests we do instead.

+ 3 lessons IBM’s Watson can teach us about our brain’s biases.

In the early 1980’s Kraft tried to compete with Klondike by making “Polar B’ar” a thing. The knock-off Klondike bars even had a picture of a blue polar bear on the package. Klondike didn’t like this very much and claimed they owned the color blue. Klondike didn’t succeed in trademarking one-sixth of the rainbow, says Cracked. Blue was ruled to be a “functional color” for frozen food, in that it implied “cold” to consumers. In other words, Klondike simply made the connection that millions before it have made between blue and cold. Here are 5 more ridiculous things people claimed to legally own.

Did we miss something? Send us your tips, stories, or comments about the Daily Brief to support@etrhelp.com.

Did a friend forward you this email? Subscribe to get the ETR Daily Brief in your inbox.