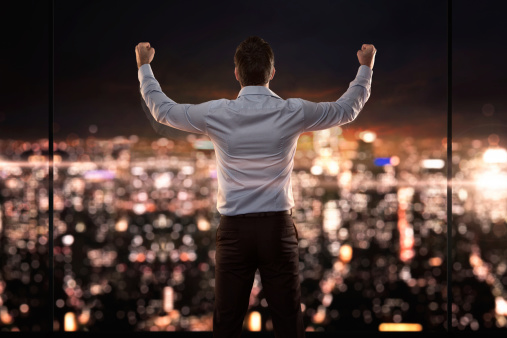 I really never had what it takes to succeed inside a corporation of any size. Just like when I was working as a church musician, I had two fundamental flaws:

The worst part was, I’d sometimes do both of those things at the very same time.

So it’s no surprise that I’m not navigating the political maze of some big company somewhere. I just wasn’t made to do that. Instead, I trudged off into the big bad world to work for myself. The majority of my experience is in and around the service businesses I started.

As a new business owner, I had a big obstacle to work through. The obstacle was the “artist” mentality I had brought with me from my former life as a musician. When you’re young and naive, you think that “how well you play” is the deciding factor for how your career is going to go.

This could not be further from the truth, of course. Let me explain…

Service professionals sometimes fall into the same trap. It’s easy to think the level of your expertise is the deciding factor in your success. Sadly, this isn’t how it works.

As Zig Ziglar says, “Nothing happens until someone sells something.”

And there’s the rub for the service professional. In order to build a successful business, you actually have to figure out how to sell yourself. Either you figure that out, or you go hungry.

For some reason, I grew up with a very bad view of salespeople. They were a kind of lower level human that manipulated other people in order to buy fancy cars and big houses.

Isn’t it odd that I ended up in a position where I either “sell” or my kids don’t eat? Kind of funny really. (But I’m used to it dear Universe…)

Why Car Salesmen Have It So Wrong

My first real attempt at “selling myself” was in the car business. I didn’t do very well because I had no idea what I was doing. Plus, I was surrounded by “successful” salespeople who only knew one way to sell.

The method was to spot the prey, chase it down, and hang on for dear life.

I’m hardly an “alpha-male,” so you can imagine how well that worked out for me. I should have seen the clues even back then. For some reason, the only cars I could sell were Corvettes to middle-aged affluent men.

You don’t sell those guys with brute force. You simply go along on the test drive (wear your seatbelt), allow them to talk, ask them questions, and watch them sell themselves.

No wonder people have such a hard time “selling themselves.” For many folks, the only type of selling they’ve ever seen is the brute force variety that makes your skin crawl.

I had no idea back then that there was a completely different type of “selling.” It was one where the customer actually walked away happy instead of leaving beaten and bruised from battle.

This other type of selling was something I could get behind because, to the customer or client, it didn’t even feel like selling.

How to Dissolve Your Internal Blocks About “Selling Yourself”

Let me make a suggestion:

If you have internal blocks about “selling,” then being in a service business focused on selling yourself is going to come with some serious struggle.

You’ll kind of be fighting yourself… forever. And don’t think your clients can’t feel that. It’s not at the level of thought, of course, it’s deeper. But they can feel even you aren’t “all in” about the “product” (you) they are looking to buy. And they will respond accordingly.

As I got a little bit wiser, I realized that if I was going to do this, I had to redefine what exactly “selling” meant.

When I started, it was clear to me that selling meant imposing my will on another. That’s what it looked like, anyway. And I think a lot of people probably do view it that way.

These days, I’ve completely flipped my thinking about selling around. A total 180 degree turn.

Selling is not pushing a product you want to sell down someone’s throat.

Selling is setting up a beautiful table full of food and inviting starving guests to take a seat.

Selling is connecting a human being’s pain with something that can relieve that pain.

Selling is being committed to helping make someone’s life better tomorrow than it is today.

And that’s how you remove your internal blocks about selling yourself. You take the focus off of you, you take the focus off what you want to achieve, and you truly show up and serve someone. Yes, service is not limited to just clients, you can do it all along the way… even with prospects that never become clients.

Try that a few times and see what happens. What happens when you “need nothing” and you walk around broadcasting that to your clients?

Well, you tend to get everything… and more.