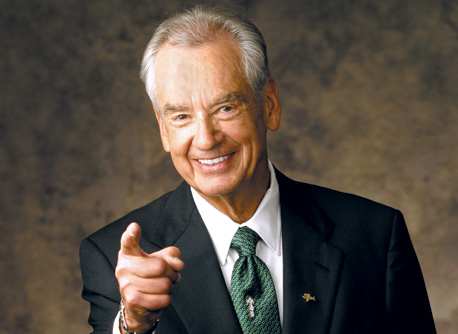 His story reads like something out of a movie. Born the tenth of twelve children in backwoods Alabama without running water or indoor plumbing, our hero set forth on a marvelous journey; one that would take him around this great world and into the hearts and minds of millions of people.

But starting out, as a humble pots and pans door-to-door salesman, changing the world was probably the last thing on his mind. Personal growth and self-help experts weren’t mainstream back then, but he knew that each day he was learning lessons that needed to be shared with others.

And so when the time came, he began speaking. First to small crowds, schlepping himself across the country in a grueling non-stop travel schedule. Anywhere a person could be motivated, or where a life could be inspired, or a heart changed, he would go and deliver his sermon, standing for what he believed in and never backing down.

As he grew in age and wisdom he continued his torrid pace, often outworking men decades younger than him. Perhaps he drew from an inner strength that most other men simply don’t have. When asked why he continued on to motivate so many, he’d reply, “People often say that motivation doesn’t last. Well, neither does bathing – that’s why we recommend it daily.”

It’s likely that you have been influenced directly by the great Zig Ziglar. He had so much to say and chose such powerful words that he will have a lasting impact on your life.

Today, Zig’s Facebook page is full of stories and comments (some 10,322 and counting), much like these from David Williams of Cleveland, Ohio, who wrote, “32 years ago an anonymous pastor gave me the full tape set of Zig Ziglar. I literally wore those tapes out over the next few years. The contents of what Zig put on those tapes shaped my life. I am still the most positive person I know. I have had a better life now that I have listened to what Zig had to say. Thank you Zig for the blessing of the life I have because of you.”

Zig Ziglar proved many things, among them that nice guys don’t finish last, and that yes, “you can have everything in life you want, if you will just help other people get what they want.”

His generosity went above and beyond, and when explaining that fact of life, he’d say, “If you go looking for a friend, you’re going to find they’re very scarce. If you go out to be a friend, you’ll find them everywhere.”

But he knew also that while a positive attitude was powerful that we would face dips in the road and dark days in our journey. Not surprisingly he had the right words for those moments as well.

“Sometimes adversity is what you need to face in order to become successful,” and “If you learn from defeat, you haven’t really lost.”

Each time he’d share that wisdom in a speech or on a CD there would be countless people hit right in the heart at just the right moment. His wisdom would once again prove that the power of words can change a life, can inspire someone through a struggle, can deliver the “check up from the neck up” that he would often advise.

And once he had our attention and had helped us stop feeling sorry for ourselves, he’d deliver that kick in the pants we needed to finally start taking action. Set your goals, get started, go after your dreams, was his message.

“A goal properly set is halfway reached,” he’d say, extolling the virtues of goal setting. And he believed in us too, even though we’d never meet, because he knew that if we had his CD’s in our possession that we came too far to turn back now.

“You were born to win, but to be a winner, you must plan to win, prepare to win, and expect to win,” he’d advise with the warmth and seriousness of a stern, but loving parent.

His words combined wisdom with humor and were delivered in that down-home, at ease style. The very style that made it so easy to receive a lesson that might otherwise seem harsh coming from anyone else.

“Every day above ground is a good one, if you don’t like it just try missing one,” Zig would say, in a way that only the legend ever could.

How fitting that Zig’s final Facebook post attributed to him on Tuesday, the day before his passing, was this:

“Where you start is not nearly as important as where you finish.”

“It’s not what you’ve got, it’s what you use that makes a difference,” Zig taught, and more importantly, lived by example. He was the epitome of the American Dream, proving that hard work and adding value to the lives of others is a sure way to achieve your goals.

Did his stories reach you at just the right time? Did he help you turn your life around? What’s your favorite Zig quote, story, or memory? Please share it with us here.

[Ed. Note. Craig Ballantyne is the editor of Early to Rise and author of Financial Independence Monthly and Turbulence Training. He is also the co-creator of the Early to Rise $100,000 Transformation Contest that will launch in early 2013. This 90-day contest is FREE for you to enter, and you’ll have a chance to win up to $25,000 in prizes in four categories: Healthy, Wealthy, Wise, and Overall. To get an idea of the changes you can make in a 90-Day Transformation Contest, please read Craig’s article about Curing Your Bad Habits here.]
Posted in Motivation, Self-Improvement, Spirituality
This error message is only visible to WordPress admins