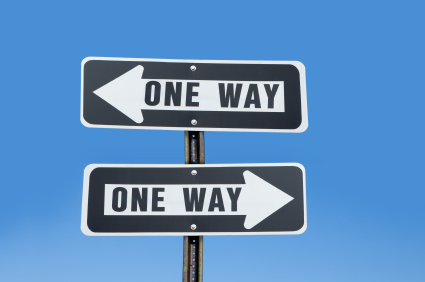 I have often heard it argued that reality is not an absolute, that each individual has his own perception of reality.  The implication is that because each of us perceives the world through our own eyes, reality itself changes from person to person.

The implication is that because each of us perceives the world through our own eyes, reality itself changes from person to person.

While it’s true that everyone perceives reality differently, reality could care less about our perceptions.  Reality does not change to adapt to our viewpoints; reality is what is.

This is why it is so important to learn to differentiate between a principle and an opinion.  The most significant aspect of a principle is that it can neither be created nor altered.  Thus, a principle is the essence of reality.  It is what it is, and it’s up to us to discover it.

SUGGESTED: Knocking Down Your Mental Blocks

There are an infinite number of natural laws to be discovered, but, fortunately, you don’t have to have a detailed understanding of every one of them to achieve your goals.  However, there is one law with which you must be totally familiar and which you must unfailingly use as a guide for your actions.

The law I am referring to is the ultimate, immutable law of the universe, the foundation of reality itself:  Actions have consequences.  Although I believe most of us intellectually understand the inherent truth of this principle, firsthand observation has convinced me that very few people give it more than a passing thought as they go about their daily lives.

Why would people ignore such an all-powerful, immutable principle?

Because truth can often be harsh, and, as human beings, we quite naturally gravitate toward less pain and more pleasure.

We simply do not like our little self-delusive worlds to be upset by such a trivial matter as truth.  We don’t worry about the consequences we may have to deal with tomorrow; we just want to feel good today.

However, we only succeed in deluding ourselves when we engage in such shallow thinking.  The reality is that one must be willing to experience the discomfort often associated with truth if his objective is to achieve positive, long-term results.

Another major obstacle to an accurate perception of reality is what I like to refer to as the Paradigm Restriction.

We are all confined not only to the planet on which we live, but, metaphorically speaking, we reside within our own mental worlds.  It is difficult to comprehend ideas and circumstances we are not accustomed to hearing and seeing within the invisible parameters that surround our lives.

Thus, one of the causes of our differing perceptions of truth is that we all start from our own set of assumptions.  This is precisely the reason why the serious seeker of truth must learn to question everything and be willing to give up cherished notions, even if it means suffering discomfort.

The best antidote for the Paradigm Restriction is an open mind. This requires rejection of custom and tradition as a basis of fact, and, in its place, acceptance of logic and reason. To get on the right track in life requires that you learn to correctly perceive reality and have the courage to accept it.

SUGGESTED: The Secret to Achieving Mastery

You probably know at least one Mr. Magoo – someone who simply does not have the mental capacity to correctly perceive reality.  He’s the individual who truly believes, in spite of mountains of evidence to the contrary, that pie in the sky business deals can be closed, that politicians are better equipped than he is to determine what is best for him, and that other people will act in his best interest and subordinate their own interests to his needs.  Which means, in simple terms, that he is totally out of touch with reality.

An Ostrich is an entirely different creature than a Mr. Magoo.  The Ostrich has the mental capacity to correctly perceive reality, but stubbornly refuses to do so.  Hard as it is to believe that anyone would make such a conscious choice, millions of people do so on a regular basis.  The Ostrich is more tragic than the Mr. Magoo, because an individual who knows the facts but refuses to acknowledge them is the greatest of all fools.  He may have a significant amount of knowledge, but his knowledge is corrupted by his misguided desire to recreate the world in his own image.

For example, everything I have said in this article is based on my perception of reality.  You are, of course, free to accept or reject any or all of my observations about reality.  And where we have differences of opinion, one of us will suffer negative consequences to the degree to which his perceptions are incorrect.

Conversely, to the degree either of us is correct in his perceptions of reality, his results will tend to be positive.  But the one thing that will never be affected by our respective views of reality is reality itself.

You should always keep this front and center in your mind as you go about your day-to-day affairs.  Trying to make it through life without a solid grasp of reality is like stumbling around in a dark room laden with land mines.

In the words of Bishop Butler, “Things and actions are what they are, and the consequences of them will be what they will be; why then should we desire to be deceived?”