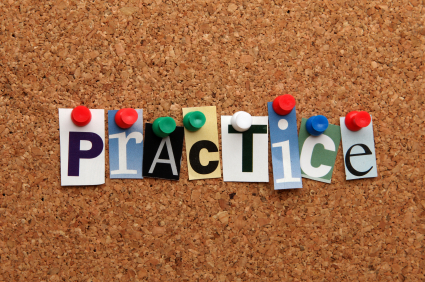 Seek mastery… even if it’s harder to get there.

Several years ago, Renato, one of my jiujitsu instructors, convinced me to get back into grappling in a kimono. “It will be hard at first,” he told me. “But after a few months, when you go back to fighting without the gi, your game will be better.”

[A gi is a lightweight two-piece white garment worn in judo and other martial arts. A gi typically consists of loose-fitting pants and a jacket that is closed with a cloth belt.]

He was right. During that first month of training, I felt like a white belt again. He was slapping arm bars, foot locks, and collar chokes at the rate of one per minute. It was downright depressing.

But I knew from experience that if I kept on practicing, I’d get better. And I did. Shortly thereafter, I increased my training from two to three times per week. Nowadays, I practice five or six days out of seven when I’m not traveling, which means I get in an average of 15 hours of practice per month, or about 15 sessions per month-270 per year.

I have no great natural talent for submission wrestling, but at 62, I keep improving. I got my brown belt two years ago, and my main instructor, Marcel, tells me that he’s going to give me a black belt this year.

Incidentally, getting belts in Brazilian jiujitsu (BJJ)-at least, the way it has been done traditionally-is not like most martial arts in which belts are essentially sold (awarded to students who take X number of lessons and can perform some moves). To get a brown belt in BJJ, I had to win two national championships at the “expert” level. To get my black belt, I’ll have to perform well at a competition in Brazil.

Making yourself a better wrestler is no tougher than improving your foreign language skills.

You must set specific goals, put in the time to practice, and practice well. I believe that there is almost nothing you can’t accomplish as long as you are willing to follow those three simple rules.

Long before Malcolm Gladwell wrote Outliers, I made this case to my readers. I hypothesized that it takes about the same amount of time to improve in any complex skill: 1,000 hours to gain competence and 5,000 hours to gain mastery. I also said you could probably discount that time by as much as half if you practiced consciously under the instruction of a great teacher.

I’ve been thinking about this because of some of the letters I’ve received from subscribers. I’m speaking about letters from people who complain they don’t have the capacity or the time to learn about some of the wealth-building programs we recommend. Most of our subscribers understand how to buy and sell stocks, but some have trouble understanding how to trade options or invest in real estate or collectibles.

I’m writing this essay today to you if you have had such doubts. I want to convince you that no matter your education, experience, or age, you can learn and even master every kind of wealth-building activity we recommend.

K. Anders Ericsson, a professor of psychology at Florida State University, has studied the subject of “expert performance” for pretty much his entire professional life. More than 30 years ago, he performed an experiment in which he trained people to hear and repeat series of numbers.

Later experiments in this area led Ericsson to conclude that whatever innate capacity a person might have for remembering is nothing, compared with how much he can learn by practice.

The bottom line: “Talent is highly overrated.” All of Ericsson’s research and findings have been put together in an 800-page book called The Cambridge Handbook of Expertise and Expert Performance.

Do what you want to do, Ericsson advises. Even if that means pursuing something for which you have no evident talent. “A lot of people believe there are some inherent limits they were born with,” Ericsson told The New York Times. “But there is surprisingly little hard evidence that anyone could attain any kind of exceptional performance without spending a lot of time perfecting it.”

That doesn’t mean all people have equal potential. Some people-like my neighbor’s child (who is singing opera at age nine) or Renato-seem to be “hardwired” at birth with a facility for certain skills.

SUGGESTED: 7 Pieces of Financial Advice That Forever Changed My Life

But in order to realize their potential, they will have to put in many hours of practice. And if they don’t, someone who has no natural talent can easily surpass them.

That’s one of the important messages in Ericsson’s book: Anyone can learn to be good at pretty much anything as long as he has the time and tenacity to practice doing it.

Of course, it can’t be just any sort of practice, Ericsson warns. It must be what he calls “deliberate practice.” This is the number one secret to skill development.

To achieve the kind of expert performance we’re talking about:

As I said, this confirms what I’ve been saying for years.

The more specific your goal is, the more likely you will be to achieve it. In The Success Principles, author Jack Canfield explains how to set ultra-specific goals:

2. Getting instruction from an expert teacher

Some know the game but don’t know how to explain it. Others are good at teaching younger people but don’t have the patience for someone my age. If you want to accelerate your learning in any field or endeavor, make sure that you have a teacher who works well with you.

Expert teachers help you in two ways: They chart a course of instruction for you to follow, they correct you every time you veer off course, and they pretty much force you to keep track of your progress.

As I said earlier, getting expert help will shorten your learning curve dramatically and thus significantly reduce the time (and sometimes money) you have to invest in it. It will also greatly reduce the frustration that comes with learning anything new-and that might keep you from giving up.

The very best athletes, entertainers, and business leaders all have someone in their corner whom they can go to for advice, leadership, and teaching. It stands to reason that if you want to achieve your wealth-building goals sooner, rather than later, you should select an expert teacher who works well with you.

And who might that be? We hope it is The Palm Beach Letter team. If you like our approach to investing and wealth building and feel you can trust us, do. Listen carefully to what we say.

3. Concentrating on technique as outcome

This is a subtle qualification. What it means is that in practicing a skill, you should concentrate on the correct execution of that skill and not so much on the rewards you will enjoy once the skill is fully mastered.

In other words, the reward for accomplishing any specific technique should be the psychological satisfaction of knowing that you’ve mastered it.

This approach makes sense. It is, more or less, how behavior modification specialists work. Here’s an anecdote about “The Jazz Master’s Secret.”

The jazz master was blues guitarist Howard Roberts, who claimed that the secret of his virtuosity was to “never practice a mistake.” His theory was that any learning is the biological process of creating neural networks in the brain.

The more you practice the right moves, the deeper the memory path. The trick is to make the correct paths as deep as possible and the incorrect paths shallow or nonexistent.