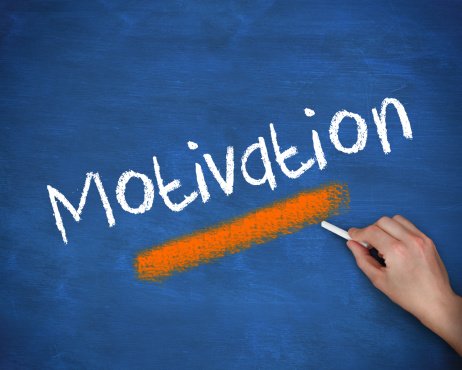 Motivation to do anything comes in two forms: push or pull.

Push is generally about the avoidance of pain. It’s the “away from” side of the motivational spectrum.” You’re actively pushing yourself away from either a source of current pain or the perception of an anticipated pain.

So, if you’re overweight and feeling bad about it, stressed and suffering, unable to do what you want because of bodily pain, are in a bad relationship or a bad job, every day brings with it the experience of current, realized pain. You don’t need to be reminded of it, it’s there with you every step. And this can be a powerful motivation, it can push you to act to remove the pain.

The quest to remove a current pain can be an incredibly powerful push toward action. But there’s a downside…

Once the pain’s removed, the motivation usually goes away. Because it moves you from wanting to remove a current pain over to wanting not to experience or re-experience a future pain. It moves you from the quest for a cure to the quest for prevention. All you have to do is look at the lifestyle behaviors of the vast majority of people and the mountain of marketing research from healthcare and pharmaceutical providers to know that people respond far more aggressively to the quest to cure a current pain than they do to the quest to prevent a future one.

Preventative action, beyond teeth-brushing, is and always will be a brutally hard sell.

It’s just the way we’re wired. Even after major health incidents, most people revert to the behaviors that led to the incidents. Not all, but most.

So, the “proactive” push away from a potential future pain is an extremely weak source of motivation. And, though powerful, the push away from a current pain is a strong motivator, but it’s “reactive” motivation – it doesn’t kick in until things get pretty bad. And it generally goes away as soon as enough of the pain goes away.

Does that mean that most of us won’t do anything until we’re mired in suffering?

Not necessary. There’s still the “Pull” side of the motivational spectrum.

Pull-based motivation is about tapping the desire to achieve something.

It’s about establishing a quest and taking action not to remove a current pain, but to bring yourself closer to a deeply desired end. Maybe it’s completing a marathon or learning to play guitar. Could be hiking the Appalachian Trail or building a business that changes not only your life, but the lives of the thousands of people it serves. Maybe it’s becoming a chess master or creating a stunning collection of paintings. Maybe you just want to solve a big honking problem or make something insanely cool, because those are activities and pursuits that fill you up.

Pull is about activities and meaningful quests that, by their very existence, inspire action in the name of coming closer to the object of the quest. And the beautiful thing about setting pull-oriented motivational drivers is that they can be long-term, they can have intermediate benchmarks that serve our emotional need for intermittent reinforcement. And, once completed, they can either expand to create a new source of pull to an even cooler place. Or a new quest with an even stronger sense of pull that builds around the foundation of habits and actions laid in the prior quest can be set in motion.

Plus, done not from a place of blind ambition, but rather a sense of presence, engagement and joy, the mere experience of moving along the “pull-spectrum,” regardless of whether you actually hit the quest you’re working toward, can be immensely rewarding.

I once heard a story about the Dalai Lama. He meditated on death, I was told, six times a day. My first response was, “how morbid.” But, also, “how interesting” and, when framed as an honoring of the impermanence of everything…how life affirming.

Then I stumbled upon Steve Jobs now famous Stanford Graduation speech, where he shared:

Remembering that I’ll be dead soon is the most important tool I’ve ever encountered to help me make the big choices in life. Because almost everything — all external expectations, all pride, all fear of embarrassment or failure – these things just fall away in the face of death, leaving only what is truly important. Remembering that you are going to die is the best way I know to avoid the trap of thinking you have something to lose. You are already naked. There is no reason not to follow your heart.

I’ve circled around to believe that honoring your own impermanence on a daily basis, owning the fact that you’re going to leave the planet and you don’t know when, can be an immensely freeing experience. Saddening at times, yes. But freeing and empowering nonetheless.

Because what doesn’t matter drops away, creating more space to explore what does matter, to take actions and risk pushing the bounds of certainty in name of defining powerful pull-based quests capable of creating magic in both your life and the world around you.

So, I wonder, where do you fall in the motivation spectrum?

Are you happy with your answer?

[Ed. Note. Jonathan Fields is a dad, husband, author, speaker, A-list blogger and serial wellness-industry entrepreneur. Fields writes about entrepreneurship and creativity at www.JonathanFields.com and interviews emerging world-shakers at www.GoodLifeProject.com. His latest book, Uncertainty: Turning Fear and Doubt Into Fuel For Brilliance, was named the #1 personal development book of 2011 by 800-CEO-Read.]