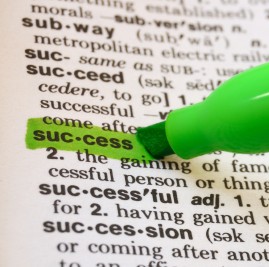 “Success for me,” John McAfee explained in Fast Company in 2007, “is can you wake up in the morning and feel like a twelve year old?”

That was before he lost 95% of his net worth. At the time he said that, as Robert Frank explains in his book, The High-Beta Rich, McAfee was living through a second adolescence, spending rampantly on grown-up toys and making poor investments. A year later, this definition of success had helped destroy his $100 million fortune and left his net worth at just a few million dollars.The point here, however, is not that our view of McAfee’s mistakes should be tinged with Schadenfreude.

Instead, McAfee’s experiences urge us to look deeper into what the true definition of success is for Early to Rise readers. While I believe in “keeping the child within you alive” (after all, it’s Rule #11 on my personal list), acting and feeling like a child is not how I define success.

But what is the true definition of success?

And who am I to define it?

Those were my thoughts on a recent sunny (early) summer morning as I enjoyed another one of our Facebook ETR QnA sessions. I’d even gone so far as to register the domain name,www.SuccessQnA.com that redirects to our Facebook page (because it’s a lot easier than referring readers to Facebook-dot-com-forward-slash-the-New-Early-to-Rise).

Early in that particular session, a young reader asked, “What is your definition of success?”

I was momentarily stumped (one of the reasons I prefer the Facebook QnA to live in-person sessions – as no one can see the stunned look on my face when I’m asked a difficult question like this).

My first instinct was to rely on the definition from Dave Kekich listed in his Kekich Credo’s that I review each morning. But, while interesting, it isn’t exactly what I wanted to say. Kekich Credo #7 states:

“You’re successful when you like who and what you are. Success includes achievement…while choosing and directing your own activities. It means enjoying intimate relationships and loving what you do in life.”

After dismissing that option, my second reflexive response was to pull a cop-out answer and say, “Success is up to you. Everyone has their own personal definition.” But that’s not what our reader wanted to hear. They wanted a good answer. They came looking for guidance, and I had better deliver.

I quickly turned my thoughts to the many discussions between Matt Smith and myself about people we admire, about what we looked for in role models and great people.

Matt and I have had a long running debate about what makes a great man. We determined that first, in order to be a great man, you must be a good man. There are two requirements of a good man. First, a good man does everything he says he will do. He honors his contracts. He delivers on his promises. And second, a good man does no harm to others. That’s it. Everything you can think of, from the Ten Commandments to every bizarre law passed by Congress, can be covered in these two simple rules for living a good life.

One of the components of doing something great is adding value to the world. And that brings us all the way back to our Facebook ‘riddle’, “What is success?”

So here’s my answer, direct from the Early to Rise dictionary, on the True Definition of Success:

There is no one thing that makes you “successful”. For some, it might be raising a healthy, happy, tight family. For others, it might helping dozens, hundreds, thousands, or millions of customers. I suppose if there is one common thread among all areas ofsuccess, it’s the “Adding of Value”. My definition of success is, “If you are adding more value to the world than you are consuming, then you are well on your way to success.”

The traditional definition of success won’t make you a great man or woman. History is littered with the tragedies of people who  have suffered from personal struggles as their financial success increased. What often brings them down is the other half of thesuccess equation – consumption. While they might continue to add value to the world, they tend to get in trouble because their voracious appetite for consumption outpaces all of the value they create.

As John McAfee admitted after losing 95% of his fortune, “We have over time equated entrepreneurialism with the drive to accumulate wealth. It’s a perversion of values.”

McAfee learned this powerful lesson the hard way. While there’s no reason to shed a tear for him (he’s still a multi-millionaire), there’s a positive post-script to his story.

Today, you’ll find McAfee back living the true definition of success, as defined by Early to Rise. As Robert Frank reports, McAfee has moved to Belize to pursue new vaccines from jungle plants and has started a host of other businesses, including the nation’s largest ferry company. He has returned to adding value to the world.

As Lao Tzu, the father of Taoism once said, “The wise man puts himself last and finds himself first.”

Just as a byproduct of healthy eating is often weight loss, a byproduct of the ETR version of success (adding value) is often the accumulation of wealth (or some type of reward).

Problems arise when we focus on the outcome rather than the process. The outcome, for almost any goal, can lead to someone following the wrong processes. If the focus is only on weight loss, people try all sorts of unhealthy processes. Just as when we place the focus only on accumulating wealth, we can make all sorts of unrighteous decisions.

The lessons from Robert Frank’s book and from the ETR definition of success should encourage you to do the following:

Be good, be passionate, and add value to the world. There are amazing opportunities out there for you because the world is full of problems that need solving. Be a value adder, not a value extractor. Focus on the process and the outcome – success -should take care of itself.

[Ed. Note. Craig Ballantyne is the Editor of EarlytoRise.com and Financial Independence Monthly. He also coaches executives of companies with sales over $1 million. Today, Matt Smith and Craig are now offering more information on their new virtual mastermind program. Click here to find out more.]
Posted in Motivation, Self-Improvement, Spirituality
This error message is only visible to WordPress admins