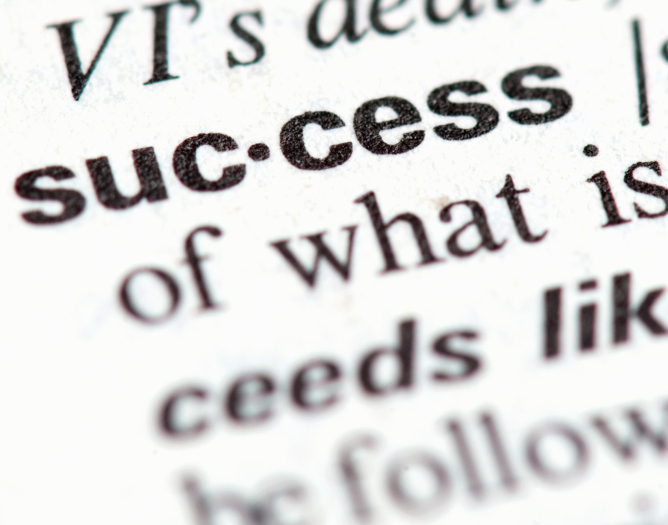 I remember years ago being asked to be one of several people to contribute to an article intended to answer the question, “What is the Secret to Success?”

Putting aside my personal opinion that there is no one big, overarching, magic bullet-type secret — but rather a set of proven principles — there was something else to consider.

You see, while I was honored to be asked, I also realized that — by the very nature of the question — there is an inherent problem. And that is, before one can legitimately answer the question and hopefully provide some helpful information, the very term, “Success” must first be defined.

If you’re a regular reader of mine you might be rolling your eyes right now knowing I would say that. Otherwise, you might think I’m simply being “nitpicky.” I don’t think so. I believe that if it’s not defined then the very answer is going to be confusing. And, the confusion will become more and more exaggerated with each different answer.

Why? Because both the writers and the readers could be coming from very different perspectives.

This is why you’ll sometimes hear someone say, “Success isn’t everything” when what they really mean is, “Money isn’t everything.” (They have defined success as being money, and only money.)

A Well-Known Example or False Premise?

By the way, “Success” also happens to be one of those terms that is contextual in nature. In other words, it’s substance changes depending upon the situation.

If you have a goal of losing 10 pounds within three months and accomplish that goal, you were — by the nature of the thing — “successful.” If you lost nine pounds you were not successful in reaching the entire goal. You were 90 percent successful.

The above examples defined “Success” as: “The accomplishment of a desired goal.” It also included various degrees and interpretations of success.

Now some other definitions, in different contexts from the above.

One of the first definitions of this term I’d ever heard was from the great Earl Nightingale on his audio program, Lead the Field. He defined Success as “The progressive realization of a worthwhile dream or goal.”

In his book, Wooden, co-written with Steve Jamison, John Wooden, the famous UCLA record-setting basketball coach defined Success as “Peace of mind that is a direct result of self-satisfaction in knowing you did your best to become the best that you are capable of becoming.” What’s very interesting is that, despite his enormous propensity to win basketball games…his focus was not on winning; his winning was the result of what he focused on; mastering the fundamentals in relationship to his above quote.

Christopher Morley wrote, “There is only one success — to be able to spend your life in your own way.”

And, in their book, The Law of Attraction, Esther and Jerry Hicks opine that “The achievement of anything that you desire must be considered success . . . but, if you will let your standard of success be your achievement of joy, everything else will fall easily into place.”

I think each and every one of those definitions are terrific and add their own dimension to the concept of Success. I don’t believe any of them conflict, but rather complement.

My definition — and the one I’d like to use here — seems to most resemble Coach Wooden’s. I define success as “A feeling of peace of mind and genuine happiness based on having lived up to one’s potential.”

This could include an entire life of success or success with regards to a specific accomplishment. It could also apply to specific areas of life, such as — but not limited to — success of a financial, physical, spiritual, mental, emotional, or social/relational nature.

Based on my definition, it seems we could legitimately say that, “to the degree one lives up to their potential in the specific area they are targeting for success, that is the degree to which they are successful.”

Now that we have our definition (or, I should say, “a” definition since my definition need not be yours), let’s answer the original question, “What is the Secret to Success?” Or, if not one actual secret, what are some proven principles that can get us there?

We’ll look at that in more detail in the next article tomorrow.

Meanwhile, please tell us, what is your definition of Success?

[Ed. Note. Bob Burg (www.burg.com) is coauthor of the International Bestseller, The Go-Giver. The book has been published in 22 languages and has sold over 250,000 copies. Check out this brief and entertaining overview of the book at http://www.burg.com/tgg where you can also download Chapter One. And, of course, feel free to share it with others.]