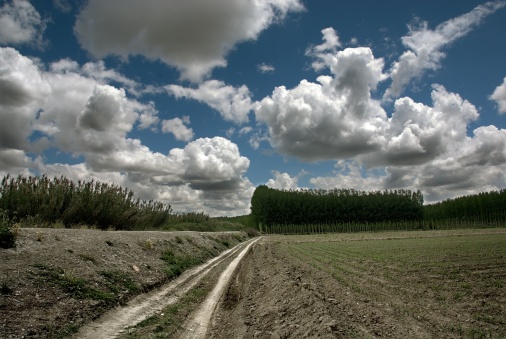 The old Ballantyne farm where I grew up lies in the fertile lands of Southwestern Ontario. On our property you’ll be treated to a great bounty of what Mother Nature has to offer.

There are rolling hills where my father planted corn, flat stretches of fields where he grew his soybeans, a small bush of maple trees where he kept a shack and a few trails for snowmobiling, and a winding little stream that cuts through the heart of it all, separating the main homestead into almost equal rectangles of land.

It’s a wonderful place to spend a spring day, watching Mother Nature renew herself each year. As winter comes to an end bringing April showers and causing the last bastions of snow to melt, we’re treated to the annual spring runoff. Water builds up in puddles upon the top of the hills, and then breaks through the soft, lush topsoil and hurtles down towards the riverbank. There it joins the raging river that the otherwise soft-spoken stream becomes for just a few days each year.

On it goes during the cold, damp, grey days in late March and early April, with the runoff creating deep ruts in the mud. The steeper the hill, the stronger the rush of the water as it seeks its lowest point, and the deeper the rut it creates in the land. Over time, it carves out temporary scars in the landscape that won’t be healed until the spring plow.

That’s the power of consistent concentration and focus. It’s Mother Nature’s demonstration of the power of sustained pressure.

Our habits work the same way, particularly our bad habits. And the longer you follow your bad habits, the deeper the cut you get into. Soon you find yourself stuck deep in the muck of poor decisions, with banks built so high on either side you feel as if there is little hope of escaping.

That’s the problem with habits.

Perhaps you’ve built up a morning routine that is negatively impacting almost every aspect of your life.

It all started with an innocent visit to Dunkin’ Donuts for your morning java. One day you decide to treat yourself to a calorie-laden breakfast sandwich. Just this once, you think, even though it is overpriced, bulges your belly, and leaves you so sleepy that you find yourself in desperate need of another coffee in just ninety minutes.

A few days later, standing in line again and having missed out on your breakfast at home, you think to yourself, “One more won’t hurt.” Two weeks later it’s a daily habit. Then it’s a 7-year addiction and the chief reason you’re tired, overweight and unhealthy, and wasting money on unnecessary calories rather than eating healthier and lighter at home.

But this routine is so ingrained in your daily behavior that you can’t break free.

That’s the problem with habit.

The longer you do something the harder it is to stop.

It’s not unlike the rain and snow combining forces out on the farm to create the deep ruts in the muck. Once a path is chosen, the rut gets deeper faster than it gets wider. Consistency only makes it worse.

Not only do your habits – both good and bad – become automatic, done-for-you actions that eliminate thinking and the stress of decision making, they also becomes a part of your identity.

at-home-breakfast-sandwich-eater. Or maybe you’re a Sunday-afternoon-football-beer-and-wings-eater. Or an Ice-cream-after-dinner-because-I-deserve-it-after-a-hard-day person. And heaven help anyone that gets in the way of your routine. We can all get mighty cranky when someone interrupts one of our daily habits.But after a while, you come to your senses.You wake up one morning and you admit, “This has to stop.”

You also realize that you could just as easily build powerful, positive habits – if you were simply willing to be consistent at taking the right actions.

It’s up to you to change.

According to Charles Duhigg in his best-selling book, The Power of Habit, “The Golden Rule of Habit Change: You can’t extinguish a bad habit, you can only change it.”

If you were out on the farm, you’d realize you couldn’t stop the water from running down the hill. But as a child I discovered I could change the water’s course if I put a big rock in the way and created a new path for the water to take. You’d eliminate the current option (breaking the bad habit) and make Mother Nature find an alternative (institute a new, positive habit). And that’s how you change your habits, too.

Now it won’t be easy, but it can be done.

“It is facile to imply that smoking, alcoholism, overeating, or other ingrained patters can be upended without real effort. Genuine change requires work and self-understanding of the cravings driving behaviours. This is the real power of habit: the insight that your habits are what you choose them to be,” Duhigg explains.

How do you change?

Habit change can only occur when you’re willing to try.

First, you must commit to change. It can’t be done half-heartedly, and the change starts with your self-image.

“The ‘self-image’ is the key to human personality and human behavior. Change the self image and you change the personality and the behavior,” writes Dr. Maxwell Maltz, author of the book, Psycho-Cybernetics, that has sold over 30 million copies and been recommended by every one of my mentors, from Dan Kennedy to Matt Furey.

Change your identity and truly believe in yourself. Go from being the “Dunkin’ Donuts dieter” to a new self-image where you believe that you are “the type of person that gets up on time to eat a breakfast of real, healthy food at home.” Make that your new self-image and the right habits will follow.

Second, you must plan to transform. You must be prepared to make changes and get out of the offending routine that is giving you negative results. One way to do that is to identify alternative actions. You must have two solutions to every obstacle in your way.

When you combine your new mindset with an array of alternative actions, you’ll have a blueprint for overcoming the problems of habit and harnessing the power of habits.

If you do this, you can make significant changes in as little as three to six days. Literally. It doesn’t take as long as you think to eliminate longstanding vices and poor decisions.

This worked for me when I wanted to stop cursing. First, I changed my identity. I committed to becoming a person that does not curse. Then I identified alternatives. There are plenty of words that you can substitute, or better yet, I could choose a more positive reaction to almost any situation.

It was easy to change my habits in environments where the ruts of bad behavior had not run too deep. It was a little harder to change my vocabulary in situations where the habit was deeply ingrained (such as a night out with ‘the boys’). Hard, but not impossible. Over time, with a new self-image and practicing my alternative actions, my bad habit has been nearly extinguished. This plan can work for you too.

You can still change any bad habit that you want, no matter how deep the rut.

If you have to start one place, Duhigg recommends an action that is close to my heart and that should be a part of everyone’s life – exercise. As Duhigg explains, research shows that exercise is one of the most powerful catalysts for improvements in all areas of your life.

He writes, “Typically, people who exercise, start eating better and becoming more productive at work. They smoke less and show more patience with colleagues and family. They use their credit cards less frequently and say they feel less stressed. Exercise is a keystone habit that triggers widespread change.”

That’s the power of habit.

Tell us what habit are you going to change starting today in the comments section below.


[Ed. Note: Craig Ballantyne is the editor of Early to Rise and author of Financial Independence Monthly and Turbulence Training. He is also the co-creator of the Early to Rise $100,000 Transformation Contest. Though this round of the Transformation Contest has closed it’s not too late to get access to all the helpful tools and advice that has helped many people make a positive change in their lives. Get started on your major life transformations today.]
Posted in Articles, Motivation, Productivity, Self-Improvement, Time Management
This error message is only visible to WordPress admins