If you have not read Robert Cialdini’s monumental work, Influence: The Psychology of Persuasion – grab it now! One of the major psychological triggers he explains is the principle of “scarcity,” and how it affects a person’s decision to make a purchase. The principle is based on the fact that human beings have been hard-wired to want what is going away. And far more people are motivated by the thought of potential loss than potential gain.

If you get this principle right, you’ll be astonished by the sales results. A lot of marketers think they understand it, but that’s not the case. There’s more to it than simply saying “x number of units will be sold” OR “limited-time opportunity” or “buy before midnight tonight.”

Many buying decisions are made in response to an emotional trigger. So whenever you buy something, it’s always a good idea to step back and see if you can figure out what the emotional trigger was that motivated you to do it. Because if something works on you, there’s a good chance it will work on your customers, too.

Scarcity is one of the emotional triggers that works on me.

For instance, my first sports car was a Honda S2000. When it came out in 2000, the car was impossible to get. My local dealer had an allotment of two or three of them for the year. Only 5,000 were made, and about 2,000 of those came to the U.S. I searched all over the country, looking for the rare color combination I wanted (silver with a red interior). I found my S2000 about 800 miles away in upstate New York, and drove it all the way down to our place in Maryland in the pouring rain.

Here’s an example of an ad that applies the principle of scarcity in a way that’s believable. It’s from Porthos.com, a company I buy a fair amount of wine from. 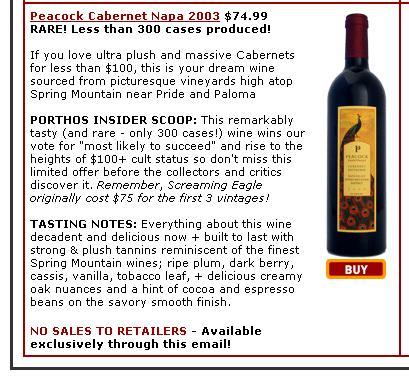 By mentioning that less than 300 cases were produced, the ad telegraphs exclusivity, rarity, and scarcity without being over the top. Also, if you trust the company’s recommendations (and I do), you believe that this wine will most likely hit $100+ cult status. And notice this at the bottom of the ad: “NO SALES TO RETAILERS.” Yet another scarcity trigger.

Porthos does an excellent job of using scarcity to sell to their market. Most wine collectors are considered to be affluent and sophisticated consumers. As you can see, you can use this psychological trigger in a way that does not insult your customers’ intelligence.

Let me give you a few more examples…

The Enzo is Ferrari’s $600,000+ supercar, named in honor of Enzo Ferrari, the company’s founder. They produced exactly 399 cars. That’s it. Ferrari collectors know that when Ferrari tells them a car is a limited edition, it really is.

Only a privileged few can own a Ferarri, and not only because of the high price. Ferrari makes potential buyers apply to buy one of their limited-edition cars, placing restrictions on what may and may not be done with it. They enforce those restrictions by threatening to withdraw perks like factory tours and the chance to buy future Ferraris. I was talking to the owner of an Enzo at a car show in New York, and he told me you had to have been a registered owner of three other Ferraris to qualify for the privilege of applying for an Enzo.

You see a lot of special editions created for collectible and high-end merchandise like pens, cigars, and spirits. For example, I found the following pen on a website that keeps track of all their sold-out editions as proof that what they’re selling really is scarce:

I think verisimilitude – the appearance of truth – is the key to making scarcity work for your business. E-books don’t have it. You can say you’ll sell only 500 copies of your e-book, but there’s no “appearance of truth” in that. An e-book is just bits and bytes, so why would it be truly limited? I’ve seen some marketers use scarcity ploys that had me wondering if they really expected their customers to believe what they were saying. If your customers question your credibility… you’re done for.

To avoid falling into that trap, my advice is to combine scarcity with another one of the psychological triggers Robert Cialdini talks about in Influence: giving people a “reason why” your offer is limited.

[Ed. Note: As master Internet marketer Yanik Silver (www.MaverickBusinessInsider.com) says, scarcity is a powerful motivator when you’re trying to get prospective customers to buy. I saw him at ETR’s Bootcamp, and I’ll tell you, his info blew me and the crowd away.]

Yanik Silver is an established internet marketing expert, having been in business online since 1998. He has numerous internet products to his name, including Instant Internet Profits, Internet Marketing Lab, 21 Mind Motivators, Instant Sales Letters, Million Dollar Emails, Autoresponder Magic, and Instant Marketing Toolbox. Yanik has a Bachelor's Degree in Marketing from the University of Maryland. He is also a frequent guest speaker at internet marketing seminars.

Posted in Articles, Entrepreneur, Internet Business, Wealth
This error message is only visible to WordPress admins