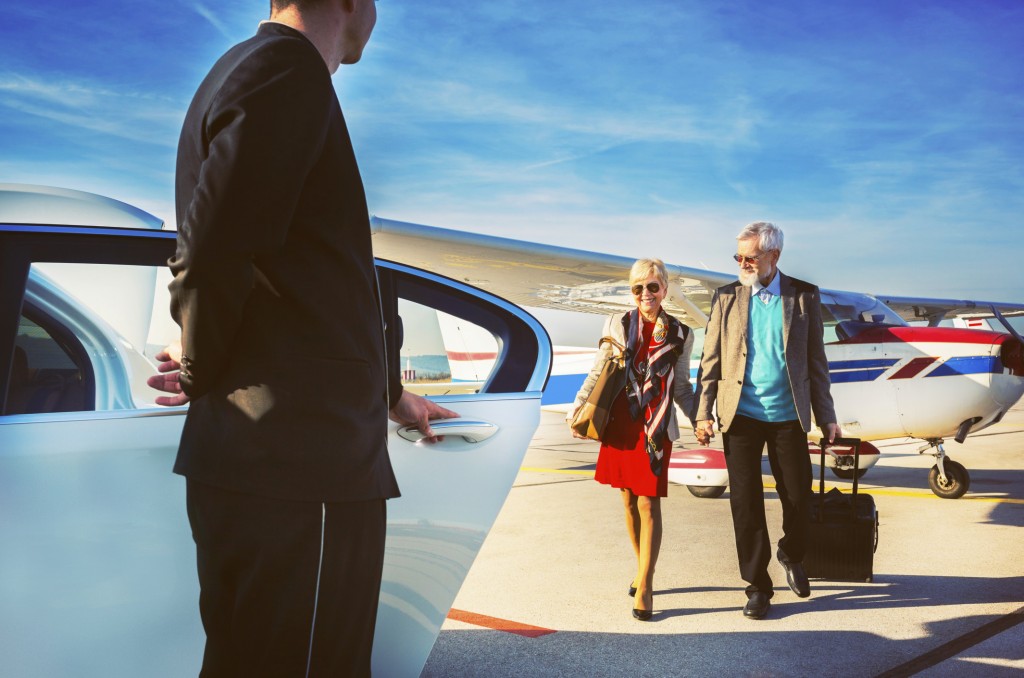 Jean Paul Getty was a son of a gun. He was also one of the most successful businessmen in American history. He amassed a multibillion-dollar fortune in the oil business.

But his was not a rags-to-riches story.

The Gettys were Scotch-Irish Presbyterian immigrants.

Gettysburg, Pennsylvania, is named after their relatives. J. Paul’s father, George F. Getty, built up a successful  insurance and corporate law practice in Minneapolis. Then, in 1904, he moved his family to Oklahoma to get into the booming early days of the oil business. His Minnehoma Oil Company was successful within just a few years. His estate was valued at between $10 million and $15 million at the time of his death.

At age 21, J. Paul returned from college, having worked in his father’s oil fields during the summers. His father lent him the money to start investing in oil wells on his own. Within two years, J. Paul had made his first million.

He said, “In building a large fortune, it pays to be born at the right time. I was born at a very favorable time. If I had been born earlier or later, I would have missed the great business opportunities that existed in World War I and later.

The year after that, he decided he wanted to take some time off from the oil business to enjoy his money and chase women.

He spent the next two years as a playboy in Los Angeles before returning to the oil business in 1919.

He was married and divorced three times in the ’20s. George Getty was pleased with his son’s business savvy but not with his personal life. Near the end of his life, George said that J. Paul would destroy the family business.

But George was wrong. J. Paul didn’t destroy the business. Instead, he destroyed the family…

A Man of Many Accomplishments

J. Paul was a consummate womanizer. By the time of his death he had been married five times. And he had numerous lovers on the side.

He teetered between his love of women and his love of business. But business almost always won out. As one of his former wives remarked, “Business was his ‘first love.’”

J. Paul himself said, “A lasting relationship with a woman is only possible if you are a business failure.”

Lasting relationships aside, he was a man of many accomplishments…

From his obituary in the New York Times:

…he possessed a keen mind and a tenacious memory – one so full of detail, it was said, that he could recite with ease the circumstance of complex financial dealings.

Mr. Getty had a better-than-average knowledge of petroleum geology; knew his way about in the art world; was fluent in English, German, French and Italian and could get along commendably in Spanish, Arabic, Russian and Greek; and could read Latin and ancient Greek without too many hesitations.

He constantly worried about the state of his health. He ate health foods, chewing each mouthful 33 times; munched maple sugar candy between meals, worked at Bernarr Macfadden body-building exercises and walked two miles a day wearing a pedometer to calculate his mileage.

He liked to pretend to poverty by wearing rumpled suits and sweaters out at the elbow. He also liked to practice the prerogatives of wealth by attending splendid social gatherings and by escorting comely women many years his junior to parties. He was a friend of the Duke and Duchess of Windsor and of many correspondingly notable and fashionable people here and abroad.

In 1949, he pulled of the biggest deal of his career by securing a 60-year concession on a Saudi Arabian oil field. He learned Arabic in order to negotiate directly with King Saud. He paid $9.5 million for the field, where no oil had yet been discovered. After investing $30 million in exploration, he hit oil in 1953. Production reached 16 million barrels a year. Tat’s worth more than $1 billion at today’s prices. It was a blockbuster deal that put him firmly in the billionaire category.

In the late ’50s and ’60s he was considered the richest man in the world, with a fortune of between $2 billion and $4 billion.

Financial Success at the Cost of Marital Success

But despite his enormous financial success, J. Paul’s personal life was a mess.

Later in life he seemed to regret the decisions he had made. He said, “I hate to be a failure. I hate and regret the failure of my marriages. I would gladly give all my millions for just one lasting marital success.”

He had little time for, or interest in, any of his five children. There was not much in the way of a stable family life for them. After five divorces, there was no central matriarch to anchor the family. There was little concern that the emotional needs of the children were being met. J. Paul spent years living in hotels in Paris, London, and New York.

His fifth wife, Louise, reported that he criticized her for spending too much money trying to treat their son Timmy’s brain tumor. When Timmy died at age 12, J. Paul was already living apart from his wife in the U.K. He was on a business trip and didn’t bother to show up at the funeral. Louise divorced him that year…

He was famous for his avarice and thriftiness. He put dial locks on the phones and installed a pay phone at his 16th-century Tudor estate in the English countryside, Sutton Place. Because of the number of guests and workers on the property, the phone bills had gotten too high.

The kidnapping of his grandson, John Paul Getty III, on July 10, 1973, by the ’Ndrangheta mafia in Rome was world news.

Like his father, Getty Jr. was described as “a swinging playboy who drove fast cars, drank heavily, experimented with drugs, and squired raunchy starlets.” He divorced his son’s mother and married a Dutch actress named Talitha Dina Pol. The Gettys lived a bohemian lifestyle in London, Morocco, and Italy. They were a part of London’s “swinging” ’60s scene. They hung out with the Rolling Stones and other rock stars. Talitha died of a heroin overdose in Rome on July 14, 1971.

During that time, Getty III attended an English boarding school in Rome. He got kicked out for vandalizing the school the same year his stepmother died. After that, he lived a bohemian lifestyle in Rome while his father moved to England.

When Getty III was kidnapped, the ransom note demanded $17 million. Getty Jr. asked his father for the money. J. Paul thought it was a “plot by the rebellious teenager to extract money from his miserly grandfather.”

Getty III remained a hostage for months while his stubborn grandfather negotiated the ransom price.

The kidnappers lost their patience. They sent a lock of hair and a human ear to a local newspaper with a note that read, “This is Paul’s ear. If we don’t get some money within 10 days, then the other ear will arrive. In other words, he will arrive in little bits.”

J. Paul negotiated a deal with the kidnappers to pay $2.9 million. But he would only put up $2.2 million, because that was the maximum that was tax deductible. He loaned the remainder to his son, Getty Jr., at a rate of 4% interest.

After the ransom was paid, Getty III was released on December 15, 1973. The kidnapping and mutilation traumatized him for the rest of his life. He became an alcoholic and a drug addict. An overdose of valium, methadone, and alcohol caused a stroke that left him a quadriplegic and nearly blind. He died at age 54 in 2011. His only child is the actor Balthazar Getty.

Getty Jr. was also a drug addict. But he recovered after rehab in the ’80s. He was a philanthropist who gained the title of “Sir” and became a British citizen.

Luckily for Getty Jr. his mother established a trust that held a 40% stake in Getty Oil. It was worth $4 billion when they unlocked the trust in 1985. J. Paul himself left the vast majority of his wealth to the Getty Museum, which houses his art collection.

The $4 billion trust was broken up into four parts of $750 million each (the rest was set aside for taxes) and subdivided among J. Paul’s children and grandchildren.

However, his second son, the disfavored Jean Ronald Getty, received only $3,000 in yearly income from the trust. Ronald had supported his mother, J. Paul’s third wife, Adolphine Helmle, in delaying the final settlement of their divorce so that J. Paul was delayed in marrying wife No. 4.

J. Paul’s favored son, Gordon Getty, assumed control of the family trust upon his father’s death. He sold the family business to Texaco for $10 billion in 1986. He’s on the Forbes list as the 212th richest American, with a net worth of $2 billion.

In 1999, it was revealed that Gordon Getty was leading a double life. In one, he was a San Francisco socialite and philanthropist, but it turned out he had a second family in Los Angeles. He had three daughters with a woman who was not his wife. The secret came out when the daughters applied to change their last names to Getty and apply for inheritance rights.

On April 1, 2015, Gordon’s son Andrew Rork Getty was found dead, at age 47, under mysterious circumstances in his mansion in the Hollywood Hills. He was discovered by his ex-girlfriend, against whom he had a restraining order. Police evidently had visited his house more than 30 times due to domestic disturbances between the couple. The police said they were often under the influence of drugs. The coroner’s office is currently awaiting the results of the toxicology report…

A Legacy of Tragedy – A Curse of the Rich

J. Paul Getty’s selfishness and neglect of his family helped cause a multigenerational legacy of tragedy for his children.

He was a domineering manager who would sometimes make his executives stand at attention in his presence. Once, when the head of one of his companies made a suggestion in a meeting, he said, “Who does that fellow think he is? Why, he’s nothing but a damned office boy.”

He said of himself, “I’m a bad boss… A good boss develops successors. There is nobody to step into my shoes.”

This brings up what might be the saddest Getty story, that of J. Paul’s eldest son, George Franklin Getty II.

He was the heir apparent, executive vice president and CEO of Getty Oil from the age of 43.

He was a board member of Bank of America and widely considered a successful business leader. But his father, reportedly, very rarely praised him. J. Paul did not attend his son’s wedding and rarely visited his three granddaughters.

George referred to his father as “Mr. Getty.” He was quoted as saying, “Mr. Getty is the smartest businessman I know. Coming to see him is like visiting Mount Olympus.”

Over the years, George became depressed. It was said that he jabbed his arms with a letter opener out of frustration. A week after writing a morbid letter to his mother, he committed suicide in June 1973 with a cocktail of alcohol and pills at his home in Bel Air, California.

More than the money, this was the legacy of J. Paul Getty.