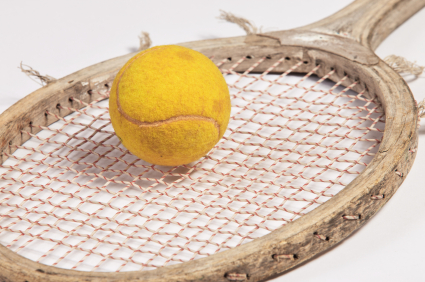 I’ve been a tennis fan most of my life.

I remember watching the legendary tennis player Bjorn Borg back when I was a kid.

Back in those days, Borg used a wooden racket like everyone else on tour. And because of his immense skills, he won a lot of championships.

In 1991, he tried to make a comeback. But by then things had changed in the game of tennis. Players had begun using better, more powerful equipment. Rackets made of metal and graphite.

Borg, however, stayed true to his wooden racket. And the results weren’t pretty.

He possessed the same physical skills, had the same strategic knowledge of the game, but the game had changed around him. Because of his unwillingness to adapt, he lost to inferior players simply because their equipment was better.

The tennis environment changed around Borg. And the moment he decided NOT to adapt to that change, his career was effectively over.

This is the kind of game changer we’re seeing in the online world.

And just like Borg, you have a choice to either adapt or fail miserably. (I’ll give you a strategy to adapt in just a moment.)

The Change that Will Change Everything

I predicted it would happen five years ago when I wrote my two reports, Attention Age Doctrine parts I & II.

But only now, marketers are starting to feel the effects, as they struggle to find new business and make sales.

But here’s the good news… if you can recognize this change early for what it is, you can be one of the first to profit from it.

If you understand how to adapt to this change, you’ll be able to get new customers more easily. You’ll get free of the burden of having to scratch and claw for every new sale, every new client.

And you won’t have to badger your prospects with long sales messages or email sequences to make the sale.

More importantly, you’ll develop the single most valuable skill there is in marketing … To effectively sell your products and services “cold.”

In other words, you’ll be able to effectively sell to a prospect on the first contact. And that will grow your business and your profits faster than any other option.

So what is this change?

I call it the “death of the big promise.”

And if your business relies on a big promise to initiate your sales messages…you need to hear what I’m about to say.

In the early days of marketing, the easiest way to make a sale was to make a big over-the-top promise. It was the “wooden racket” of its day.
At the time it was a tremendously successful approach.
So if you wanted to sell your product door-to-door, or through a direct mail package you would make a big, bold promise about what your product can do.

And it worked… for many years.

So it’s no surprise that the majority of marketers use the same approach online. Most online marketers start all their sales conversations with a big promise – a huge in-your-face request for your business.

I’m sure you’ve seen these big promises online – the companies that promise you riches or the perfect body if you buy their product.

There’s just one problem. These big promises are now falling on deaf ears.

The market is too sophisticated. And your prospects are too inundated with sales messages and other distractions (emails, texts, social media etc) to give your big promises even a passing glance.

In short, these big promises are becoming obsolete. And you must adapt if you want to stay in business.

A Revolutionary Idea… that Began 40 Years Ago

The smartest marketers in the industry are already adapting.

Take Agora for example. Instead of starting sales conversations with old tired big promises, Agora trains their copywriters to use new innovative ways to draw their prospects in, and make them lean in and listen to sales messages.

In fact, they started using alternative ways to begin sales messages 40 years ago in direct mail. And the market is just starting to catch up.

As a result, Agora now has the ability to sell prospects “cold” faster than nearly anyone else in the industry.

This $200 million dollar marketing message didn’t start with a big promise. It started with a prediction that drew prospects in.

This promotion does not even mention what Stansberry is selling until 60 minutes into a 70-minute video sales letter.

You can do the same thing in your own sales messages. Rather than starting a sales letter (or any other sales copy) with a big promise, try leading with a different angle.

For example, you might lead with a story that engages your readers. Or you might begin a sales letter with a prediction about something that’s coming in your market that your prospects need to know about.

Stansberry did that with End of America. You can do the same thing. Or you can continue to use a “wooden racket,” and watch your business suffer. Your choice.

[Ed. Note. Rich Schefren is known as the “guru to the gurus” because he has coached more Internet gurus than any other business coach alive today. Now you have the opportunity to watch the presentation Rich gave at the ETR Bootcamp. Attendees paid $2,000 to see this…and you get access for free, watch here: https://schefren.infusionsoft.com/go/etr/newetr]
Posted in Internet Business, Motivation, Self-Improvement, Wealth
This error message is only visible to WordPress admins