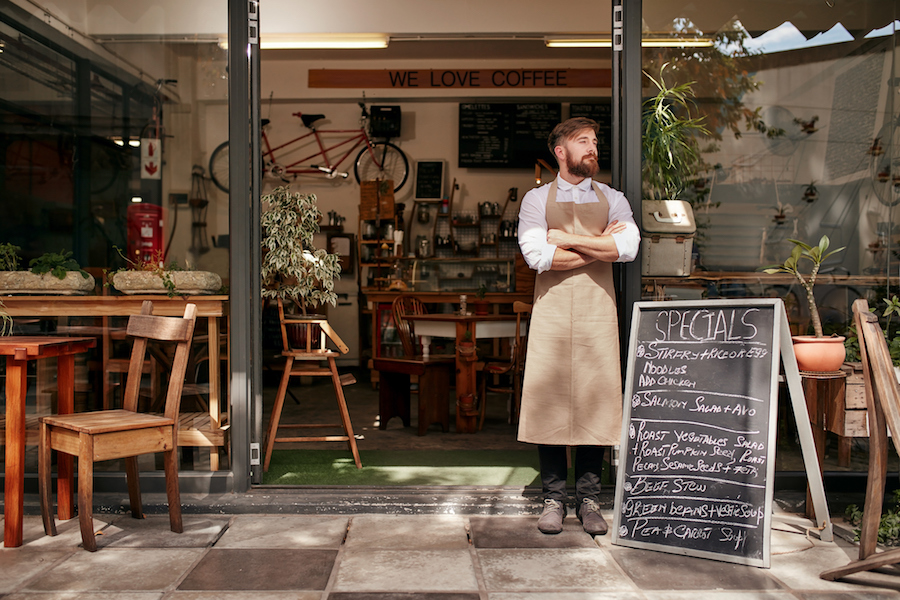 Entering the piazza, we saw that we had the choice of four restaurants: one that was very busy, two that were moderately busy, and one that was empty, with just one couple sitting at a table in the back.

Which do you think we picked?

Here was our thought process:

We couldn’t bring ourselves to consider the nearly empty restaurant. If it were any good, more than two people would have been eating there. We scratched that one.

Then there were the two that were half-filled. One had plastic chairs. That one was out. The other one was cute – a contender.

So it was between that one and the crowded restaurant.

They both had attractive table settings. They had similar menus and pricing. There was no significant difference between the two except that one was crowded and the other wasn’t.

In the less-crowded restaurant, the waiters would be less rushed, the kitchen less pressured. That being the case, we figured we would probably get better service.

But we also assumed that the crowded restaurant must have been crowded for a reason. There was now only one table left. We grabbed it and felt lucky to be there.

How did we decide?

On the face of it, you might say we made a logical decision. But I don’t think that’s what we did. Our logic, such as it was, was more a rationalization of deep-seated impulses. Neurobiologists say that such impulses were implanted in the human brain millions of years ago.

If you want to be a master marketer, you must become an expert at understanding those impulses. Because when it comes to decision making, impulse is just as important as logic. Maybe more important.

In his classic work Influence: The Psychology of Persuasion, Robert Cialdini showed how successful marketers play on these impulses to persuade prospects to buy.

Cialdini would say that our decision was based on a combination of “urgency” and conforming to “social proof.”

And that’s what I want to talk about today: why you need to include adequate urgency and social proof in your advertising efforts.

When we mention that Early to Rise has 400,000+ subscribers… or when McDonald’s says they serve 52 million people around the world every day – that’s social proof.

Urgency you’ve seen during one-day sales or when a supermarket offers a specially priced item “as long as supplies last.”

When K and walked into that plaza, we had only one piece of prior knowledge about those four restaurants. K had read that one of them was excellent. And so that was the one we meant to go to.

That was the restaurant that was nearly empty. Seeing it so – surrounded by three restaurants that were doing good business – gave us serious doubts.

The review K read had said the food was excellent but the pricing was a bit high. So why didn’t they have more customers – people like us who were willing to pay a little more for good food?

Since there was no one there but two people at a back table, we were scared to try it. Perhaps the management had changed since the review was written. Perhaps someone had died of ptomaine poisoning the night before. Who knew?

We had reliable evidence (the review) that the restaurant was good. But we ignored it because our instincts made us fearful.

Cialdini would have said that was the effect of social proof – in this case, the negative social proof of its being nearly empty.

In his chapter on social proof, Cialdini says:

“The principle of social proof states that one means we use to determine what is correct is to find out what other people think is correct. The principle applies especially to the way we decide what constitutes correct behavior. We view behavior as more correct in a given situation to the degree that we see others performing it. Whether the question is what to do with an empty popcorn box in a movie theater, how fast to drive on a certain stretch of highway, or how to eat chicken at a dinner party, the actions of those around us will be important in defining the answer.”

Cialdini cites a psychological study in which children with an extreme fear of dogs were cured of their phobia by watching a video of other children playing happily with dogs. After watching the video for just four days, for just 20 minutes each day, 67 percent of the children were able to interact comfortably with dogs. And the results didn’t dissipate over time.

As examples of social proof in action, Cialdini also mentions canned laughter on TV sitcoms and the incessant naming of donors during public radio pledge drives.

Now consider how social proof might play out in an advertising campaign.

You are selling a product that happens to be very good. When you create the promotion for it, you say that it is good and you talk about its benefits for your prospects. But you provide no social proof.

Reading your promotion, the prospect is initially intrigued. But because there’s a lack of social proof to back up your promises and claims, he doubts what you’re telling him. He begins to read everything you have written as potential fluff. He wants to believe you (as all prospect do) but his inner brain (the part of the brain that controls emotional intelligence) is skeptical.

What does he conclude?

My guess: that you have given him no proof of your promises and claims because you have none. And if you have none, that must mean the product is unsatisfactory. So he decides not to buy from you. He has plenty of other similar offers to choose from.

Back to our restaurant experience…

We had eliminated the one restaurant that already had us sold because of a lack of social proof.

Now there were three to choose from. We eliminated the first one because of the plastic chairs. This, too, I would argue, was a decision based on emotional not rational intelligence. It’s been our experience that a restaurateur who thinks a plastic chair is adequate is likely to be one who thinks mediocre food is adequate.

So then it was down to two: one half-filled and the other nearly full.

Both could have had great food. We could have asked people dining there what they thought of it — thus gathering social proof ourselves. But the restaurant that was nearly full was filling up fast. There were a half dozen other couples milling around. If we took too long to make our decision, we wouldn’t have the option of choosing the busiest one. So we opted for that and took the one remaining table.

What, then, was behind our final choice?

It was ‘scarcity’ – one of the factors that creates a feeling of urgency.

The fact that there was only one table left made us worry that we would miss out. So we yielded not to logic but to an instinct we had that scarcity equals value.

“The idea of potential loss plays a larger role in human decision making. In fact, people seem to be more motivated by the thought of losing something than by the thought of gaining something of equal value. For instance, homeowners told how much money they could lose from inadequate insulation are more likely to insulate their homes than those told how much money they could save.

“Collectors of everything from baseball cards to antiques are keenly aware of the influence of the scarcity principle in determining the worth of an item. As a rule, if it is rare or becoming rare, it is more valuable.”

To illustrate the impact of scarcity, Cialdini cites a study in which the owner of a beef-importing business uses one of three prepared sales pitches with his regular customers, wholesale buyers for supermarkets: (1) his standard sales pitch; (2) his standard sales pitch with a bit of information about an upcoming shortage of imported beef in the next few months; or (3) both of the above, as well as an aside that this information about the shortage was not well-known.

The buyers given the second version of the sales pitch bought twice as much as those given the standard spiel. And the third group bought six times as much.

After ordering our meal, we asked our waitress why our first-choice restaurant was empty. (It was now completely empty.) We expected to have our suspicions confirmed — that since that glowing review was published, something had changed. But that is not what she told us.

She said, “I don’t know. But that’s the way it goes here. One night we are very busy and the next night it is someplace else.”

“What do you think accounts for it?” I asked.

“The one that gets the earliest customers usually is the one that fills up,” she said.

So there it was.

Our first choice probably had the best food, but it was now empty because everybody but one couple had come to the same conclusion we had. Like us, they probably made a decision based first on a lack of social proof and second on a feeling of urgency created by scarcity.

If I were the proprietor of any of those four competing restaurants I’d make sure that my place was always full by doing three things.

By taking advantage of the principles of social proof and scarcity, I would ensure that my restaurant would attract a continuous stream of customers.

As expert marketers we have an obligation to do the same with our advertisements.

We must, of course, make sure that every promise and claim we make is backed up with factual proof – the results of scientific studies, statistics, that sort of thing.

But we must provide social proof as well. That would include endorsements by trusted authorities and testimonials from satisfied users.

And don’t forget urgency. Urgency can be created in many ways in an ad – but the strongest way is based on scarcity. You must let the prospect know that if he wants the product you are offering at the price you are offering, he must act now.

So there you have it: two extremely important advertising principles. Make yourself a promise that you will pay them heed. I am making that promise to myself as I write this.