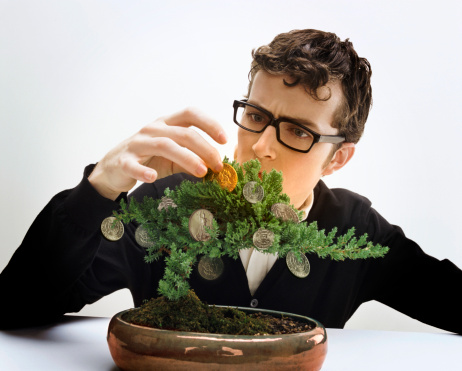 It was my golden age of television. When I was thirteen years old, I’d race home from my Sunday morning hockey game, rewind the tape in the VCR, lie on the family room floor out at the old farmhouse, and watch a recording of the latest episode of Saturday Night Live.

Even Stuart Smalley. Do you remember that character played by Al Franken? Smalley was a parody of the self-help and affirmation world, with a catch-phrase he’d repeat to himself in a mirror, “You’re good enough, you’re smart enough, and doggone it, people like you!”

It wasn’t a character that would elicit a great belly laugh, but a smile and a chuckle all the same.

Stuart Smalley’s advice, however, won’t get you very far in the real world.

What matters to your boss and your clients are results. And today I’ll show you how to do just that.

To achieve results, you need to add value. To add value, you must develop valuable skills. That’s where many workers, and business owners, are failing.

Young people today are being churned out of the higher education system woefully unprepared for the Value Economy. They have wonderful knowledge of the Liberal Arts, but frankly, that and the ability to make a decent cup of coffee will just get you a job at Starbucks.

You need to, as the title of the best selling book says, Be So Good They Can’t Ignore You, written by Cal Newport.

Newport, a professor at Georgetown, originally set out to answer the question, “Are people successful when they follow their passion?”

Surprisingly, the answer is no.

Says Newport, “From what I found, ‘Follow your passion’ is terrible advice.”

Instead, Newport found that as people developed valuable skills, they became more passionate about the work.

“My advice is to abandon the passion mindset that asks ‘What does this job offer me? Am I happy with this job? Is it giving me everything I want?’ says Newport.

He suggests shifting to a mindset of, “What am I offering the world? How valuable am I? Am I really not that valuable? If I’m not that valuable, then I shouldn’t expect things in my working life. How can I get better?”

Become so good at a valuable skill that the world cannot ignore you.

That is how you get ahead in life.

Scott Adams, the creator of the eponymous Dilbert cartoon, says, “Dilbert started out as just one of many get-rich schemes I was willing to try. When it started to look as if it might be a success, my passion for cartooning increased because I realized it could be my golden ticket.”

He turned his initial success of adding value into something he could become passionate about. He started with a little bet before he took bigger steps.

This is a much better approach than plunking down four years and forty thousand dollars for a degree, whether it is a Liberal Arts or a follow-up MBA program.

One young man at Early To Rise is the perfect example of Cal Newport’s approach to becoming successful.

Gary was on the path to becoming a successful lawyer with a job lined up in New York City. But feeling like there was still something better out there, he attended the annual BlackSmith Liberty and Entrepreneurship Camp in Vilnius, Lithuania. That’s where, each summer, my friend Simon Black brings together entrepreneurs like myself to speak to fifty college-aged, ambitious men and women about alternative career paths.

In the summer of 2011, Matt Smith was one of the speakers, and he revealed Direct Response Marketing as the secret to success.

Gary was enthralled with both the message and the messenger. He knew that he wanted to work for Matt in the field of direct response marketing, for if he did, he was sure to be successful on his own terms.

Gary returned to America, gave up his promising law career, and entered into an intense period of study in the art of copywriting.

He didn’t love copywriting. He wasn’t passionate about it. And frankly, he wasn’t very good at it when he started.

He knew it was a valuable skill. He knew that as he improved in the art of writing sales letters that he would also begin to enjoy it more. And he did.

Today, Gary is passionate about it. But more importantly, he has a valuable skill that has allowed him to work for Early To Rise under Matt Smith’s tutelage. He has achieved one of his early career goals because he has been able to add value to the world.

Gary became so good we couldn’t ignore him. Like Scott Adams, Gary’s passion increased with his potential. As he did the work, improved his skills, and traveled further down the road towards expertise, he came to enjoy the craft more and more.

On the outside, people will look at Gary and mistakenly think, “He pursued his passion.” But the truth is passion hooked up with Gary on the journey to skill development.

That brings us to you and your situation, no matter what age, career level, or place that you hold in life.

Gary’s living proof that you hold the key to your future in your hands. The choices you make, the path you choose to follow, the education you decide to get, and the expertise you decide to acquire, are all up to you.

You do not need to go back to college. You can do this on your own.

David Kekich writes in Credo #93: “The best investment you will ever make is your steady increase of knowledge. Invest in yourself. Thirty minutes of study per day eventually makes you an expert in any subject – but only if you apply that knowledge. Study alone is no substitute for experience.”

Go out and create your future. Build your skills. Become an expert. Be relentless on your quest to expertise. Step up. Take action. Do the work. Get better. That is what matters. Make little bets. Turn them into big steps. Go for it.

Don’t rely on affirmations alone to change your world. Don’t think that simply following your passion is the sure path to prosperity.

Learn to add value. Only then will the market deem that you’re good enough, smart enough, and that enough people like you so that you will earn what you deserve.