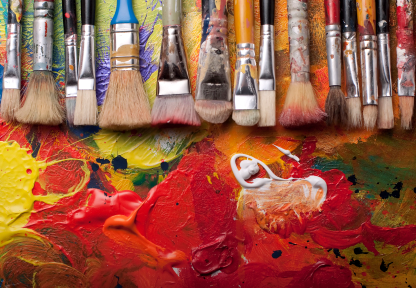 A few years ago, I was in Aspen for a Maverick Business Adventures experience. Along with high-level networking and business coaching, we also enjoyed whitewater rafting, rock climbing, rappelling, mountain biking, and an intense Jeep 4×4 tour to the top of a local mountain that ended in a breathtaking view.

But the day before I left, Aspen also taught me an interesting marketing lesson…

As you probably know, Aspen is filled with great boutiques, restaurants, and art galleries. I wasn’t planning on buying anything, but enjoyed looking in the galleries – and that’s where our story starts.

The first part of any sales process is typically grabbing the attention of the prospective customer – and my attention was caught by a piece in one of the windows. It was cartoonish yet sophisticated. So I popped into the gallery. The piece was by an artist named Todd White, and it was called “My Heaven and Hell.”
The gallery had a bunch of White’s prints, and as I browsed through them I started getting the “story” of the artist from the gallery salesman, Johnny. He told me how White had worked on “Ren & Stimpy” and helped created “SpongeBob SquarePants.” I’m a big fan of animation, so this intrigued me.

If you have read “Influence: The Psychology of Persuasion” by Robert Cialdini, you know that this is a good example of one of the persuasive techniques used by salespeople. “Story” helps the salesperson make a deeper connection with his prospect and start to set up the sale. (“Story” is important to the buyer, because he knows he’ll be able to tell it to people who admire the item after he’s bought it.)

Johnny followed this with a laundry list of celebs that collect White’s work – an example of what Cialdini calls “Social Proof.”
Then he showed me a brochure with illustrations of prints by White that were no longer available because they had sold out. “He does them in very limited quantities (like 150),” Johnny explained. This is an example of another tried and true sales tactic described by Cialdini: “Scarcity.”

As I perused various pieces, Johnny would throw in an occasional comment. (For instance, he explained that “My Heaven and Hell” depicts the good and devilish sides of White’s ex-girlfriend.)

Every time I showed interest in a piece, Johnny asked me if I wanted him to move it to a better light. I declined several times, because I knew where this was heading. But, finally, I let him move two of the prints to a cozy little back room. (The purpose of the back room is to give prospects a chance to imagine how the artwork might look in their homes.)

At this point, what Cialdini calls “Commitment” and “Consistency” takes over. I’m making small commitments toward buying, starting with picking which prints I like the best. And psychologically, Cialdini tells us, once you’ve made a commitment, you’re more likely to behave in a consistent manner by sticking with that commitment going forward.

Meanwhile, I was offered a beer, Champagne, or water – an example of Cialdini’s principle of “Reciprocity” at work. Giving prospects a treat is a good way to make them feel like reciprocating in some way – presumably by making a purchase.
I’d been through this same kind of presentation before. Still, it was interesting to watch it unfold with my psychology hat on – especially since the gallery was doing something that I hadn’t seen before: They were playing a DVD about Todd White’s career, his press coverage, his works, and people who are his collectors. Another way of injecting social proof into the sales process, plus what Cialdini calls “Authority.”

When I kept going back to my favorite piece, Johnny asked me what it would take for me to buy it right then and there. I shrugged my shoulders. Then he said, “What if I can talk the owner of the gallery into giving you a crazy price on two of them?” I said I would be willing to negotiate price, but only on the one piece. In Cialdini’s terms, this is an example of reciprocation (by me) after a “Concession” (on price).

The owner then stepped in. He pointed out that the print I had chosen was hand embellished, not simply “a print.” And he talked to me about the frame itself – its multiple layers and how ornate it was. Cialdini calls this the “Value Buildup.”

Finally, the owner gave me a “Reason Why” he was able to give me a discount: It was the end of tourist season and the rent was due.

We negotiated down to about 50 percent of the “retail” price, and shook hands. A few weeks later, a huge crate arrived at my house with my “All Lit Up Again” print by Todd White.

How many of the above sales tactics are you using to try to persuade customers to buy? If you’re using just one or two, it’s time for you to take a good look at Cialdini’s book.