They say beauty is in the eye of the beholder. The same holds true for pictures. Any image can represent many different ideas to different viewers. A successful stock photographer has to learn that the hard way.

Often when we’re composing a shot, we have a specific idea in our head – we see one thing. This might be especially true of shoots that we set up in a home studio with a particular theme in mind. In my experience, however, it is often the more general photos that become the big sellers of a portfolio.

I first considered trying my hand at stock photography at the Photography Workshop in Paris in May 2006. I found the idea of selling my work a bit daunting at first, but it seemed like a fun sideline to the more general area of travel photography that I was getting back into at the time.

It also felt like a “safe” way to begin, since a stock photographer is virtually anonymous to the buyer. Offering an online portfolio to millions of potential buyers felt much less intimidating than presenting my travel photography to a single editor or to a local coffee shop for their consideration.

I had just purchased my new digital Canon prior to the Paris workshop, and I had thousands of photos to play with upon my return. Within a week, I was accepted to iStockphoto and Shutterstock. Not only that, I sold my first uploaded image on the very first day it posted! That was all the encouragement I needed to keep uploading more photos. How much harder could it be, right?

Well, I did continue to get downloads of my images, but they weren’t exactly selling like lightning. Like many photographers, I found that many images didn’t get any downloads at all. Some images were more popular than others, but still no big sellers in the bunch.

I live on the border of Los Angeles, at the edge of a small community that has a farmer’s market every Saturday morning. One morning, I took my camera over to get some photos of the fruits and vegetables and whatever else I might find. I took some great photos of giant artichokes, colorful displays of oranges and tangerines, berries of all kinds, and tumbling piles of peppers and squashes.

I have sold downloads of all these photos, but the highest selling image of my whole portfolio ever since is the one that shows a full vegetable stand with all kinds of organic offerings. This one: 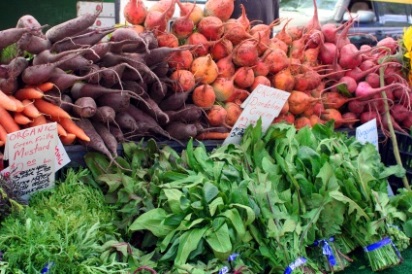 Because of the canopy, the lighting wasn’t ideal, and I didn’t really know how the shot would look in a large format. Regardless, the collection of vegetables and herbs turned out to be just the right image to represent many ideas to many different buyers. I didn’t know that at the time.

I really thought my pile of oranges in the sunshine was my greatest shot that day. But I wasn’t looking at it from a buyer’s perspective. I was holding onto that artistic eye we photographers always use in composing our shots. As the downloads kept adding up for this image (and not so much for the others), I realized that we need to think of topics or themes whenever we’re shooting for stock.

While my image of a bunch of giant green artichokes with a few tiny purple ones nestled up to them is eye catching, the specific topic of “artichoke” won’t have as broad an appeal as “organic food” in general.

Now I make a point of visiting the farmer’s markets in any foreign city I travel to, and I shoot everything I see. Not only have I sold other shots from these markets, but it is great fun to see the different types of things on offer from one country to the next.

One other thing — some images can be big sellers for artistic reasons. A shot I took from the Stanford Hotel in San Francisco has been a big seller for me on iStock. 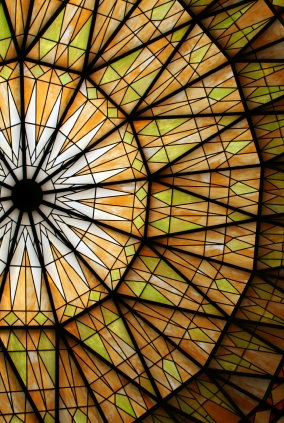 I was waiting for my son in the lobby of the hotel and looking up at the stained-glass dome. I didn’t have the right lens to get the whole dome in the shot, so I quickly snapped a shot of half the dome. The earnings of this shot don’t compare to those from my vegetable display, but its per-download earnings are higher, including Extended License purchases.

So, how do you get an idea of what makes a big seller? Browse through iStock and check out the portfolios of other photographers. Set the view to “Downloads” so the highest selling images are displayed on the first page.

Even better, if the photographer indicates that there are more images similar to the high-selling image you are looking at, compare them. What would make one version of the shot sell more than others? Composition, copy space, any number of reasons may apply. Study and learn.

Even though I don’t shoot as often as I used to, my images on iStock continue to get downloaded and purchased. I guess that’s another great benefit of selling your photos as stock. If life gets in the way of shooting, your images don’t just disappear. They’re still out there for sale somewhere.

[Ed. Note. If you’re interested in selling your photos to check out the Lazy Man’s Guide to Stock Photography, free when you order the new fourth edition of Turn Your Pictures into Cash, here.]
Posted in Entrepreneur, Wealth and tagged make money, photography, photos, pictures
This error message is only visible to WordPress admins