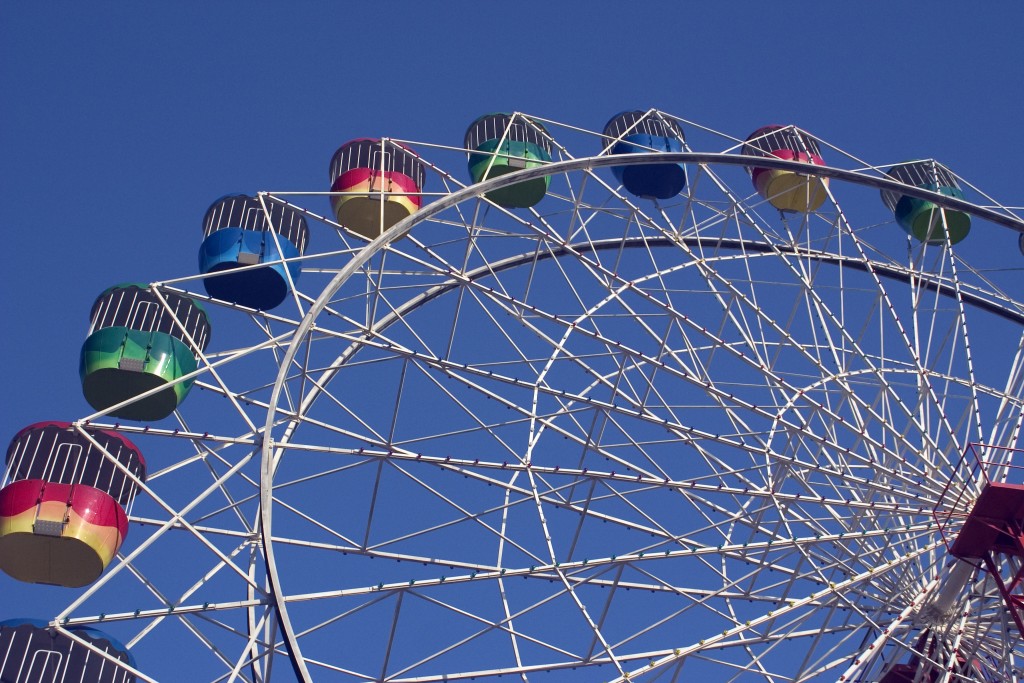 As we went up for the last and final drop, I felt the grip on my hand tighten up like a vice. A second later we dropped fourteen stories straight to the bottom.

It was an epic moment and one that I’ll never forget.

This was the first time that my five-year old daughter Chloe had gone on the Tower of Terror attraction at Disneyland, although judging by her grip on my hand, it may also have been the last.

But that won’t stop us – and hundreds of thousands of others – from visiting the park at least once a month. In fact, Disneyland and its sister park California Adventures packs in 105,000 people on a weekend day who spend money like it’s going out of style.

Now there’s something special about Disney. Both parks are kept spotless and in tip-top shape year-round. Disney spares no expense at delivering the “magic.” It truly is the happiest place on earth, as your kids will attest to if you’ve ever had the chance to take them.

You and I might think that the $89/person price point (per park, by the way) would be too much for a family to spend just for a day at an amusement park. But that’s where you’d be wrong, because Disneyland is unlike any other park you’ve ever been to or will ever go to.

But Disneyland is the happiest place on earth. Not only because their marketing has been telling us that for years, but also because Disney backs up that claim by delivering happiness like no other place can.

While other amusement parks have rides, games, food, and even accompanying water parks to draw in the crowds, they still struggle miserably to maximize attendance, even though they charge just a fraction of a Disneyland ticket.

The reason why is that all other amusement parks offer a watered down “me too” product. Worse, by attempting to offer everything to everyone, they’re excel at nothing.

Disneyland on the other hand has figured out the “magic” formula that keeps their parks packed and their prices at a premium.

While other amusement parks try to be everything to everyone, Disneyland does one thing, and they do it better than anyone else. Other parks offer scary rides, kid rides, games, a selection of foods, and even alcohol for the adults. They think that by offering more things they can attract more people.

Disneyland is proof of this.

Disneyland is not just an amusement park. It’s a place to build memories and create family traditions that will be passed down from you to your kids, and from them to their kids.

They do one thing and they do it better than anyone else.

That’s the missing ingredient in most businesses today. And so here’s the big marketing lesson. Claim what you’re best at, and then back it up better than anyone else in your “category.”

You want to use the Disney Strategy to keep your offline business or website packed with customers and to be able to charge what you’re worth regardless of what the prices that your competition is offering.

In fact, that’s what separates each one of my Fit Body Boot Camp (FBBC) locations from all other training facilities in their area. There’s no identity crisis with FBBC locations. There’s no mixed message in our marketing. There are no multiple programs types, services, and offerings.

Fit Body Boot Camp owners do one thing and one thing only, and we do it better than anyone else. There’s no one-on-one personal training, no yoga, no pilates, no strength and conditioning for athletes, no dance programs like Zumba, and no boring aerobic type classes.

(Full disclosure from your editor, Craig Ballantyne: I recently purchased a Fit Body Bootcamp franchise and we will be having our grand opening soon – just outside of Toronto!)

At each Fit Body Bootcamp franchise, we simply offer high intensity training bootcamp sessions designed to boost the metabolism, burn fat, and tone muscles in workouts that are well under 60 minutes.

That’s what we promise.

And that’s what we deliver.

What a wonderful marketing lesson – make a promise, keep a promise. If you do that all day long and do that one thing better than anyone else in your category, your business will become a category killer. You’ll be able to charge higher prices and deliver a better experience.

Throughout the years I’ve seen one thing stand out over all other things in almost every industry – including the fitness industry. That problem that most new businesses make is offering every product or service option under the sun and trying to be “everything to everyone.”

Before long, the business is struggling to make ends meet.

Most entrepreneurs think that they have a marketing or sales problem, when in reality they have a messaging problem.

Instead of being a generalist, you should become a specialist.

Specialize, and be great at what you specialize in.

Then tell the world about it.

Don’t give into the temptation of offering everything under the sun in an effort to stay competitive, thereby watering down your marketing message. This weakens the promise you can make – and keep – to your best customers. And that leads to cutting your prices in an effort to compete. It’s a vicious cycle and slippery slope.

Here’s why. Once you try to be everything to everyone, you’re going to have to keep it up. When the latest fad that you’ve started to offer goes cold, and something new comes along to replace it, you’re going to feel like you have to adopt it. That will suck precious time and energy away from your core business.

Likewise, if a new competitor moves into town (or creates a competing website) that offers discount prices, you’re going to feel like you need to lower your prices just to compete. But that’s the wrong foundation on which to create your business.

I don’t know about you, but I don’t want other people and other businesses dictating what I should offer and what I could charge for my products and services.

And you’ll never have to worry about that if you become the only loaf on the shelf, creating your own category of one, as Dan Kennedy calls it.

Instead of being everything to everyone and reacting to other people’s marketing, you need to set the rules from the get-go.

You need to be clear about the promise you make in the marketplace, and then deliver on it better than anyone else.

Do one thing, be known for it, and do it better than anyone else.

That’s the key to putting up a Disney-like fence around your customers and keeping them happy for life.

[Ed. Note: Bedros Keuilian is the embodiment of the American Dream. Arriving in the United States from the communist Soviet Union back in 1980, his family went from being broke to eventually adding value to their new community. Today, Bedros helps over 45,000 fitness experts grow their businesses.  Bedros knows the American Dream is NOT dead, because he is living it right now. So are the folks in this inspiring video – watch it now.]
Posted in Entrepreneur, Family, Investing, Lifestyle, Wealth
This error message is only visible to WordPress admins