The following statement qualifies as one of the most obvious, common sense string of letters I’ve probably ever put together, but…

Seems obvious doesn’t it? Do you get it? I mean really get it?

I didn’t get it for a long time.

And not “getting” this little statement has pushed out me reaching my definition of success years beyond where it should have been, given the skills I’m working with.

In the end, it all comes down to execution.

They say, “Man, how’d you ever come up with that idea? That was an awesome idea!”

And that’s the last place that so many of us look when we’re building a business.

Because it’s too obvious. And it’s not sexy. And so much of the time, it feels far too much like work for us to do it for any extended length of time.

Instead, we prefer to live in the alternate reality bubble that is the world of ideas in our head.

That’s where we can get an idea, and build it into a multi-million dollar success story without even getting up off the couch.

Living inside your own idea bubble is a great adrenaline rush. And you can invest a lot of energy there.

Tell me if this sounds familiar. It’s something I call…

Nobody knows what’s going to work when they’re building a business, so it’s nice to go as quickly as you can from idea to implementation. At that point, you get some proof from the marketplace and the next action step becomes clear.

But if you skip the implementation part, or stop before you get the proof you need, you end up in a vicious cycle where you’re basically course correcting on your unimplemented ideas. 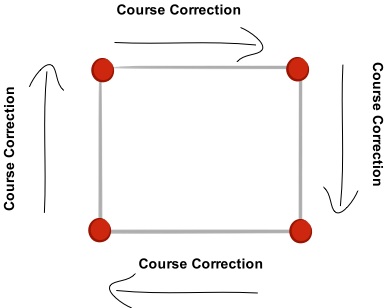 As you can see from the diagram above, you eventually end up right where you started… which is absolutely nowhere.

Let’s say you want to improve the organic search rankings of your website. You buy a course (or 4) about SEO and start ingesting information like you’re drinking from a fire hose.

You get an idea (signified by a red dot on the diagram). You build out that idea in your head and are all fired up about it, until you run into the next idea. THIS idea sounds even better, but if you pursue this one, that means that you’re not going to be able to pursue the first one.

You keep devouring the info until you come across yet another idea. This one sounds even better than any that came before it, so you scrap the previous ideas and circle your wagons around this new one… You feel fortunate that you caught yourself before investing any time or energy in those two previous ideas. What a close call that was.

In the end, you’re correcting your course without ever having started out on the course.

And it’s no different if you’re running a brick and mortar business either. Maybe you’re going to launch a postcard marketing campaign. That’s until your friend tells you that his 8.5“ X 11“ flyers are really working well. So you start designing your flyer to distribute throughout the neighborhood. But then you come home one night to find a door hanger from the local dry cleaner offering 10% off your first cleaning. “Man, these door hangers must work really well…“ you think to yourself.

In the end, there’s a whole lot of thinking and not much actual doing.

It’s an endless nightmare and it’s the reason that so many people “work” so hard at business and end up with absolutely nothing to show for it.

It’s because they’re not really working. Not the work that matters anyway.

Learning about link building is not building your business.

Getting links is building your business.

Studying successful postcard mailings is not building your business.

Learning about how to craft an effective autoresponder series is not building your business.

Hiring someone to teach you how to create a customer reactivation marketing sequence is not building your business.

Getting the sequence in the mail is building your business.

Most business building information products could probably be summarized in about a page or two of bullet points.

Instead, we pore over each word looking for “secrets” we can use to build that business in our head.

You know how the creators of the product you’re reading discovered those secrets?

They Actually Did Stuff

Want to discover the secrets of running a profitable webinar? Like one where people actually pay to be on the webinar?

I do webinars like that and you know what? The secrets jump out at you all over the place. This really is not rocket science, which is why you look at so many of the successful folks out there and wonder, how the heck did they get where they are? They’re not the sharpest tool in the shed.

You don’t have to be the sharpest tool, you just have to do something.

The thing is, all these “secrets” don’t seem like secrets to you at the point when you’re actually doing stuff. They seem more like common sense — cause you stuck your foot in something and you realized you shouldn’t stick your foot there again — or something worked and your genius brain says, “Hey dude, maybe you should consider doing that again?”

You’ll be surprised how many secrets you uncover when you actually DO stuff.

Getting stuff done is building your business.

[Ed. Note: Jason Leister is an internet entrepreneur, direct response copywriter and editor of “The Client Letter,“ the daily e-letter from ClientsSuck.net, where he helps independent professionals create success. You can contact him via his website at JasonLeister.com.]

There will always be obstacles in the way of you a

The Money WHOOOOOOOOOSH is Coming For You GOOD n