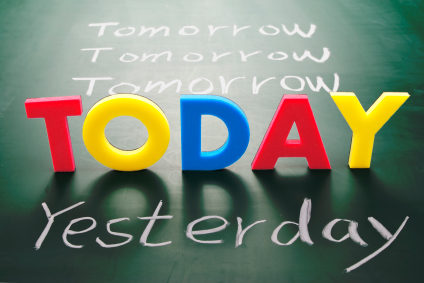 When it comes to personal productivity, we all have the chance to have good days or bad days.

If you want to have a better life, you must fill it with good days. The best way to do that is to organize your day according to your personal priorities – doing the most important things first.

It’s easy to do. Yet most people don’t. Eighty percent of the people I know – and I’m including all the intelligent and hardworking people I work with – do exactly the opposite. They organize their days around urgencies and emergencies. Taking care of last-minute issues that should have been dealt with earlier. Or doing tasks that help other people achieve their goals while ignoring their own.

Doing first things first. It is a very simple discipline. Yet its transformative power is immense. It can change your life – literally overnight.

It changed my life. Several times, in fact.

I’ve used this amazing technique to write six books, produce a record, and script and direct a feature-length film. I used it again last year to write 350 poems – one a day, after I began on January 15. And I am using it this year to get that book of poems published and to write six other books (five business books under the Michael Masterson pen name, and a novel with my personal byline).

MaryEllen Tribby used this technique to write her first book on marketing, “Changing the Channel,” which John Wiley & Sons published in 2008.

It is the single best technique I know for change. And it’s the fastest and easiest way to turn your life around if you are not happy with the way it’s been going so far.

Doing first things first. Is that what you do?

Here’s what I do:

By the time most people start wandering into the office – between 8:30 and 9:00 – I’ve done at least an hour and sometimes two hours of work that is helping me achieve my important goals. Goals that correspond to my core values. Goals that will immensely improve my life.

That’s how to begin a very good day!

I do this five days a week. And on weekends, I find at least two more hours each day to devote to my top priority. In a year, this averages to about 600 hours. Six hundred hours may not sound like much, but it is.

Here’s what you can accomplish in 600 hours:

Do any of those things sound interesting to you?

Now let me show you how I organize my workdays to tie into my long-term goals. Here is the exact schedule I followed on a recent Friday:

6:30: Woke. Dressed. Sprinted, walked, stretched, and meditated on the beach.

The first thing I do is sprint and stretch and meditate. This is the most important thing I can do (besides eating well) to ensure a long and happy life.

I devote four hours entirely to writing – which is one of my four top priorities. About half my writing time is spent on creative writing and about half on business writing. This reflects a balance that corresponds to my current goals.

11:45: Went to the office. Trained in Jiu Jitsu with Marcel. Showered. Changed.

Jiu Jitsu is a hobby for me. It strengthens me, expands my mind, humbles me, and invigorates me.

1:00: Met with my assistant. Assigned tasks to her.

I don’t take any meetings until after my midday workout. (I’ve trained everyone I work with not to expect to be able to interrupt me in the morning.) Beginning at noon, my day takes a dramatic change: from a schedule devoted to my primary objectives to one that is devoted to others’ needs. Most of the meetings scheduled during the afternoon, for example, accommodate the wishes of others. They have time to see me each day, but it’s only after I have taken care of my own top priorities.

I return phone calls in the late afternoon. It’s not a top priority for me. It’s as simple as that.

If I have a spare half-hour during the afternoon, I devote it to an important but not urgent task… like writing things that don’t have to be done by a specific deadline.

My penultimate task of the day is to review and return e-mails. I used to do it twice a day. Now I do it only once.

This is the last task of my workday.

Feeling good about accomplishing most of my priorities, I often reward myself with a second workout.

None of what I’ve said so far should astound you. It’s all good common sense. It’s advice we’ve been giving you in ETR for years.
But it’s one thing to recognize a good technique and quite another thing to learn to use it. Most people who read this essay will think to themselves, “I should do that. I should wake up early and spend time working on my dream.” They’ll think it, but they won’t do it. They may get into the office earlier, but when they do they’ll probably turn on their computer and read their e-mail.

People sometimes ask me if it’s really necessary to get up early. “I’m a night person,” they say. “I get my best work done after dark.”

“Sure you do,” I think when I hear that.

I used to say the same thing. But I was wrong. And I think you will change your mind if you allow yourself to experience the natural, unbeatable advantage of doing your most important work when your body is fresh and strong.

Get up early. Get to work early. Do your important but not urgent tasks first.

[Ed. Note.  Mark Morgan Ford was the creator of Early To Rise. In 2011, Mark retired from ETR and now writes the Palm Beach Letter. His advice, in our opinion, continues to get better and better with every essay, particularly in the controversial ones we have shared today. We encourage you to read everything you can that has been written by Mark.]
Posted in Productivity, Self-Improvement, Skill Development, Time Management
This error message is only visible to WordPress admins