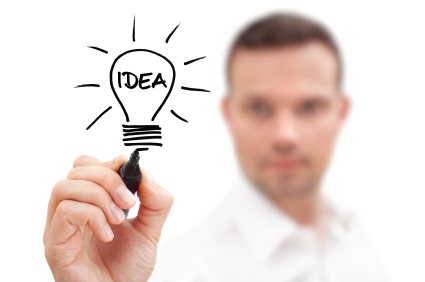 I’m a lucky man. Creativity comes relatively easy to me. Unfortunately, a lot of folks struggle with idea generation. So let’s take a look at the techniques I use to create content.

If we dig deep inside my brain, there will be a few things you might take away (just don’t take my medulla oblongata – I need that for breathing). Apply these habits to maximize your daily output and minimize your daily stress.

The first thing I do when I get up is to scribble down all of my ideas. My brain is full of them first thing in the morning. I also get up early because that is when I am most creative. This early morning spurt of creativity is called my magic time, and my life is designed to leverage the ability to get more work done in a concentrated period of time first thing in the morning. Early to bed, early to rise works wonders for me.

It is something worth trying for yourself. At the very least you need to identify when you are most creative each day. You need to design your life to reach your goals based on what you know about your strengths and weaknesses.

You can even getting in the habit of “training my subconscious” to come up with ideas overnight. Some mornings I’ll wake up with practically an entire article written in my brain. I continue to refine the idea while I pet the dog for a few minutes, and then I roll out of bed and rush to my computer to spill my subconscious upon the screen. Some of the most popular Early to Rise messages I’ve written have been finished in just fifteen minutes this way.

You can even train your brain to bring you the answers during a nap. You simply put in a “request” to your brain when you go to sleep, giving it a problem to solve. I’m not joking.

For example, let’s say you’re having trouble with a headline for your sales letter or Yellow Pages ad. Read the headline and review the principles of great headlines and sales copy before you go to sleep. Then tell your brain to come up with something better while you sleep. You should wake up with a good idea in the morning.

Don’t believe that this can work? Check out this legendary example from history. Perhaps you’ve heard the folklore about Napolean Hill. As legend goes, Hill was given a deadline to come up with the title for his book, “Think and Grow Rich”. At that time, he hadn’t come up with anything better than the dismal, “Use Your Noodle to Get the Boodle”. Seriously.

On the afternoon of the deadline he had a nap and when he woke up he had a much better title for his book. His much-improved idea, “Think and Grow Rich”, went on to sell over 20 million copies before his death in 1970.

Our brains work in mysterious ways. However, we can identify these mysterious methods and do our best to harness their power, even though we may not truly understand how it works.

What most people don’t do, however, is identify their best creative techniques and maximize the time spent on them. That’s what separates massive content creation machines – such as Dan Kennedy, Bill Bonner, Malcolm Gladwell, and Stephen King – from people who struggle to write a five-page newsletter each month.

The first step in becoming more creative is identifying when and where you get your best ideas, as well as your magic time for turning those ideas into finished concepts.

Like most people, I get a lot of great ideas in the shower. The scientific explanation for this is that our brains are able to work in a different way than when we try to come up with an idea while sitting at our regular work station. This is why we get ideas and can solve complex problems in random places, such as in the shower or while out for a walk… or while sitting under an apple tree.

According to Jonah Lehrer, author of “Imagine: How Creativity Works”, the key to creativity is not caffeine and intense focus, but instead a state of relaxation. The explanation, he says, is simple. “It’s not until we’re relaxed in the shower that we’re able to turn the spotlight of attention inwards and find the quiet voice in the back of our head that is trying to give us the answer.”

Lehrer’s top tip for getting inspired? “When you feel stuck on a problem, take a break.” At 3M, one of the companies profiled in Lehrer’s book, employees are encouraged to interrupt work with a relaxing activity to let the mind turn inward and problem solve.

He also recommends making new friends that are different from you, as well as living in a city (as the increased interactions you’ll have with strangers will be good for your creativity).

Unfortunately, ideas that come to us in the shower or while out on walks often turn into slippery little fishes. Don’t you just hate when you have a groundbreaking idea one second and then as soon as you’re toweling off, you forget it?

You could, as many readers have suggested, use children’s waterproof crayons to write ideas on a whiteboard in your shower. That seems a little bizarre even for me. Instead, I’ve developed a couple of strategies to capturing my ideas in the shower.

First, I limit myself to three ideas when I have a shower or take a long walk without a notepad. Each idea is assigned to one of my fingers (yes, I know, I have 5 fingers, but I don’t give one to my thumb or pinky). As soon as I’ve filled up all of my fingers, I keep on repeating the ideas while pointing the finger I’ve assigned it to. Sure, it sounds odd, but that way, I don’t forget the ideas. And while sometimes I end up getting dressed with soap still in my hair, I can always go back and wash it off. A lost idea however, is often lost for good.

The second way to capture those ideas might be a bit more practical. Just put a pen and paper on the sink and step out and scribble them down as quickly as possible, and make sure to carry a notepad – or smartphone – with you on your creative walks.

Scribble down your ideas as soon as they come to you in that original format. That’s an essential part of capturing the essence of creativity. As Michael Masterson once explained to me about good ideas, “It’s the particular articulation of a good idea that matters. That’s why employees always brought a tape recorder to meetings with me.”

[Ed. Note. Craig Ballantyne is a the editor of Early to Rise and lives the Early to Rise lifestyle. He is the author of Financial Independence Monthly, a program that shows you how to achieve your financial independence in the new economy. In the latest issue you’ll discover the 7 best Internet Business Models to follow. Next month you’ll learn what he would do if he had to start all over again with his online business.]
Posted in Self-Improvement, Skill Development and tagged guidance, internet business, Productivity
This error message is only visible to WordPress admins