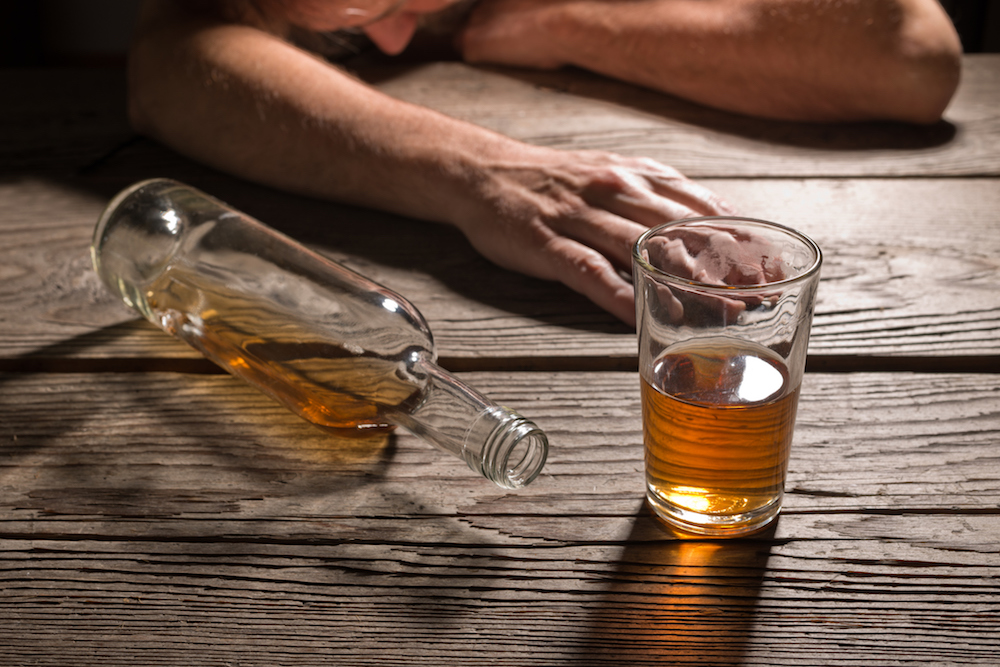 My name is Sam and I’m an alcoholic.

This is, on most days, how I begin my interaction with the other humans roaming the earth. As an alcoholic, this is my medicine, and it centers me.

But how did I get here?

Sometimes, I don’t even know myself, but I can tell you that when I was a young tennis player growing up in Vermont, becoming an alcoholic was not one of my life goals. I was destined to follow in the footsteps of Andre Agassi and go on to tennis stardom.

That’s not how things worked out.

The roots of anxiety and depression

I had a really great childhood. I would play tennis and golf all summer and ski every winter. There was no abuse, physical or verbal, in my house—just a lot of love and laughter.

I say this because later in life I would battle with depression, anxiety, alcoholism, and a cocaine addiction. There were none of the common markers from my childhood that would predispose me to any of those things.

There are a few triggers I uncovered, however, but only after several trips to rehab and years of therapy. It mostly goes back to being a really sick kid for the first 15 years of my life. I was allergic to a lot of foods and I had severe asthma that led to extended stays in hospitals every spring.

This all had lasting effects on my life as I grew up. I felt very, very different from my peers as far back as I can remember. As they were all running around the farms and fields of Vermont, I was stuck at home with asthma—and fear.

I was scared of the world. The asthma was a nice reason for anti-social behavior, though; it served as a built-in excuse for not going to birthday parties, sleep-overs, or on hay rides. But asthma wasn’t the culprit; anxiety was. I didn’t know why then, but I know now that anxiety and low-level depression followed in the wake of my struggles with asthma and allergies.

Since the start of my sobriety, I have found that this scenario is not so uncommon. The source—for me, the asthma and allergies—might be different for others, but the resulting fear, anxiety, and depression are very similar.

As I got older, the asthma began to subside and I learned how to eat around my food allergies. This did nothing for my anxiety, though. I was still scared of the world and avoided most social situations.

The danger of isolation

When I was 8 years old, I started playing tennis. The constant breaks in play allowed me to control my breathing, so it was the ideal sport—and, as it turns out, I was pretty good at it.

Tennis also worked for me because it kept my anxiety low. There were no other teammates involved, and no one I needed to regularly interact with—it was just me out there.

I started playing regional tournaments all over New England. This was my new reason to avoid the social situations that caused my anxiety to skyrocket.

What I learned over time was that tennis did more than just distract me. A disease like anxiety wants isolation. That allows the mind to compound feelings that feed anxiety, which ultimately lead to racing thoughts, an elevated heart rate, and spinning tunnel vision—not to mention a complete energy drain.

Looking back, it was clear tennis saved my life—not because it was “healthy,” but because it kept me from completely isolating. I can say now, looking back, that I had a good life, full of friends and, every so often, social occasions, in part because of tennis.

Tennis helped me navigate relationships and events. But there was still a lot of discomfort. And even though I learned to adapt, that discomfort never completely went away. Not really.

I was really into tennis, so I didn’t drink much in high school. But when I did drink, two things would happen: While I enjoyed myself, even in big groups, I would suffer a hangover the next day. But it wasn’t a physical hangover; it was an emotional hangover.

Something deep down just didn’t feel right about drinking. And I knew very well that tennis was more important to me than anything, so I used that to keep my drinking in check.

That worked through high school and college. But after college, the real “fun” began. My tennis career effectively ended, and I began a career in banking. This allowed for a lot more partying—and party I did! While my anxiety quieted to a low buzz inside my head, I had little idea that I was stoking the flames of two major fires: alcoholism and depression.

Earlier, I mentioned the emotional hangover I would occasionally experience from drinking. This is a HUGE red flag for any budding alcoholic. For the most part, when non-alcoholics drink, they do not experience this remorse, guilt, or shame. If you experience these feelings around drinking, or anything in your life, it’s worth taking a closer look at. You may find that you’re not drinking to enjoying a drink—you’re drinking to numb the pain of something much deeper. And that is a dangerous prospect.

Fast forward about 8 years, and I had moved to South Florida with my not-yet-ex-wife. I was married for two years before things started to go south.

This is the point in my life when I can pinpoint the terrible consequences of my longterm drinking and drug use. They had successfully completed a hostile takeover of my life.

Even after my marriage ended, my relationship with alcohol and drugs continued. This went on for the better part of the next 10 years, in fact. Along the way, I lost a couple of great girlfriends, my family trust, numerous friendships, a career in commercial real estate, two dogs, and a few cars.

There were also several trips to jail between South Florida and North Carolina for being drunk in public and defrauding an innkeeper. Top that off with five DUIs, the last one in October of 2012. (For that stint, I spent seven nights in jail.)

The list of consequences goes on: I fell 35 feet off of a balcony that put me in the trauma unit for five days; I gave myself oral cancer—twice; I did unspeakably bad things with bad people; and perhaps worst of all, I did bad things to good people who just happened to be in the path of my hurricane.

The writing was on the wall. But I was refusing to see it.

Fighting the fire of consequences

I may not have been able to see the writing, but I sure could feel the fire of my consequences. I knew I needed to put it out.

Finally, after years of suppressing my anxiety and depression with alcohol, I recognized where I was. All three demons—alcohol, depression, and anxiety—were battling it out inside me. But I could never seem to get ahead of any one of them. When I tried to stop drinking, the depression would keep me in my cave of an apartment for days. And nothing I could do seemed to take the edge off my depression and anxiety—nothing but alcohol.

My only relief during these times was talking a handful of Benadryl that knocked me out. (Which was not a sustainable solution by any stretch.)

Finally, on November 21, 2012 at 4am, I had suffered enough. The mere thought of keeping this insane war going was too much for me to handle. So I checked myself into a psych ward. My last indulgence, swigged at 4am that morning, was Captain Morgan’s rum alongside a line of cocaine.

The person that I had become by November 2012 was nothing like the athlete or executive I had been years before. I was 225 pounds, full of fear, and barely more than a warm body.

At 38 years old, I had nothing. And for the first time in my life, I really had to face myself.

Oh sure, I had been to rehab times before and gone through several outpatient treatment centers. But they didn’t offer a solution. I left convinced I didn’t have a problem. I just need to get a job, a girlfriend, or bailed out one last time and everything would be okay.

But that’s not how alcoholism and drug abuse work.

I had enjoyed amazing jobs, incredible girlfriends, and the generosity of friends who saved me in my hours of need. But those things didn’t erase my fear, depression, anxiety, alcoholism, and a “friendly” relationship with cocaine.

The road to recovery

After a while at the psych ward, I went directly to rehab, and then a sober living house. After 9 months of treatment, I didn’t have many places to go, but the West Coast was one option and I took it.

Having been an athlete and in great shape for “most” of my life, I knew that fitness was going to be huge for me on my journey of recovery, I just didn’t really know how big.

When I moved to San Francisco in 2013, I had no job and a clean-ish slate. When I asked myself what really inspired me, it was pretty clear: my new-found love of health. I had experienced how integral being healthy is to being happy and, for me, being sober.

So, I took a leap and decided that I wanted to make personal training and helping others my life’s work. The second I made that decision, my life started to fall into place. I had found my passion—helping others overcome struggles and achieving their best life through fitness and nutrition. Fast forward to today and that personal training career has transitioned into a holistic lifestyle and personal development coaching practice. This is all a dream come true; I get to live my passion of helping others every day.
But that required a profound humility that was initially uncomfortable. When I became sober and started to deal with my mental health, it was the first time in my life that I chose to surrender to whatever came my way. Whatever things I had to face, I became willing to face.
I learned to be okay with being a beginner at life. And, as time has taught me, if I can be okay starting over at 38, then I can handle being a beginner at anything in life.

My lessons for you

My life experience is not your life experience. But if my struggles can help you defeat any of your demons and turn your life around—to face the big dreams you’ve always had—then sharing them is worth it.

So I encourage you to reflect on these lessons that I have learned over the last 20 years:

Sam Morris was born and raised in Vermont where he was a competitive tennis player, golfer and skier. Sam attended Belmont Abbey College in North Carolina where he studied Sports Management and played #1 on the tennis team. After college a move to Miami, FL began a 10-year stint as a commercial real estate broker. During his time in Miami, during a break in his real estate career, he also coached and trained tournament level adult and junior tennis players. Upon moving to San Francisco in 2013, he decided to follow a long time passion of his and become a personal trainer. That passion and business has evolved into Telos Lifestyle Coaching. (Also, check Telos out on Instagram @telosrecoverycoaching.)