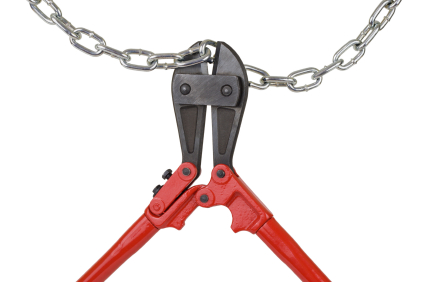 When I was in elementary school, I always pictured the principal’s office to be this dangerous, dark and scary place where people went in but never came out.

I was really scared of the principal.

I don’t even remember if I ever actually visited his office. And that only allowed the picture in my mind to grow and to become more foreboding over time. Even now when I think back, I just get this image of an evil dictator sitting high up on his throne of judgement… watching everyone who muddles about down in his kingdom. Just waiting to strike someone down. Eek!

As far as I can tell, that’s where my fear of authority started. And it controlled my life, on a very deep level–for a very long time.

Over the years, that fear transformed into something a bit darker: disdain. That’s when the rebel in me was born. That’s when my subversive side started to show.

I didn’t get what was happening at the time, but I started to have a severe lack of respect for people in my life who were in positions of authority.

My fear had begun to bubble up to the surface. And it came out as anger. I was becoming braver about confronting the status quo, but I was still a complete coward.

I guess you could say I was a brave coward, if there is such a thing.

You see, I wasn’t brave enough yet to publicly state I was “breaking free,” but I was bold enough to take those actions in private.

I was the kid who was perfectly sweet when the teacher was looking, but as soon as they’d turn their back, I’d do anything I could to subvert their power.

Soon after college, things got so bad that I started blowing up life situations as a way to relieve some of my “anti-authority,” “anti-status quo” pressure.

“Once in a lifetime” jobs I got would quickly get shattered as I struggled with how to be a “free man.”

I wasn’t very good at it, I can tell you that.

I had no idea what to do about it except to get angry. And I got very, very angry.

It was all bottled up of course. After all, I was a nice kid. My training was complete enough to allow me to suppress what I was really feeling and wear an outer persona much more acceptable to the people around me.

Eventually, I blew everything up and abandoned it all.

The great job right out of school… gone.

All of the connections I’d spent years building… gone.

All of the “potential” I had to pursue a life as a musician… kaput.

Gone in favor of something real. Something for me.

That’s the only thing I could think of doing in order to give myself a fighting chance of breaking free.

My acceptance of the status quo was too complete for the “slow and steady path.”

I needed a revolution, and I got one.

My Roadmap to Personal Freedom

I finally realized there was really only one path for me to tread. And that was a path of my own making.

The status quo regarding my family…

The status quo regarding my  work…

The status quo regarding my time management…

The status quo regarding my spiritual matters…

It was painful, turbulent and frightening. It was also the best thing I’ve ever done.

First, understand that personal freedom begins in your mind, body and soul and grows from that place.

The road to personal freedom and the escape from the status quo begins with waking up to each and every decision you make in your life.

This is a difficult habit to plant, in my experience. Years and years of shallow thinking have invaded most of our lives. We do things without really thinking about why we do them. We create entire lives for ourselves that are based on other people’s ideas and agendas.

Today is your opportunity to change that.

Today is your opportunity to break free from allowing the status quo to control you.

The truth is, it can’t control you unless you allow it.

You escape by understanding that you are on a journey worth taking.

Today is the day to escape.

You escape by understanding that the prize is worth a life.

You escape by understanding that you have been given a gift that is completely without measure: the ability to decide what direction you will travel today, tomorrow and the next day.

But I have to warn you, the journey probably won’t be easy. Especially at first.

You are 4-5 steps away from the herd. They see you there, and they don’t like it.

That’s the time to persevere.

They’re on a similar journey. And seeing them gives you great strength. It shows you that you are in very good company. The best company there is actually.

You are an independent being. You are free to make your choices and to take action on those choices. You are free to do this today, despite the best efforts of “the herd” to keep you in line.

What do you get in exchange for all of this trouble?

You get the life that is meant for you. And that, dear Reader, will make all the difference.

[Ed. Note. Jason Leister is a direct response copywriter, internet entrepreneur and editor of the daily e-letter, The Client Letter, where he empowers independent professionals who work with clients. He has six kids and lives and works in the mountains of Arizona.]
Posted in Entrepreneur, Self-Improvement, Skill Development, Wealth
This error message is only visible to WordPress admins