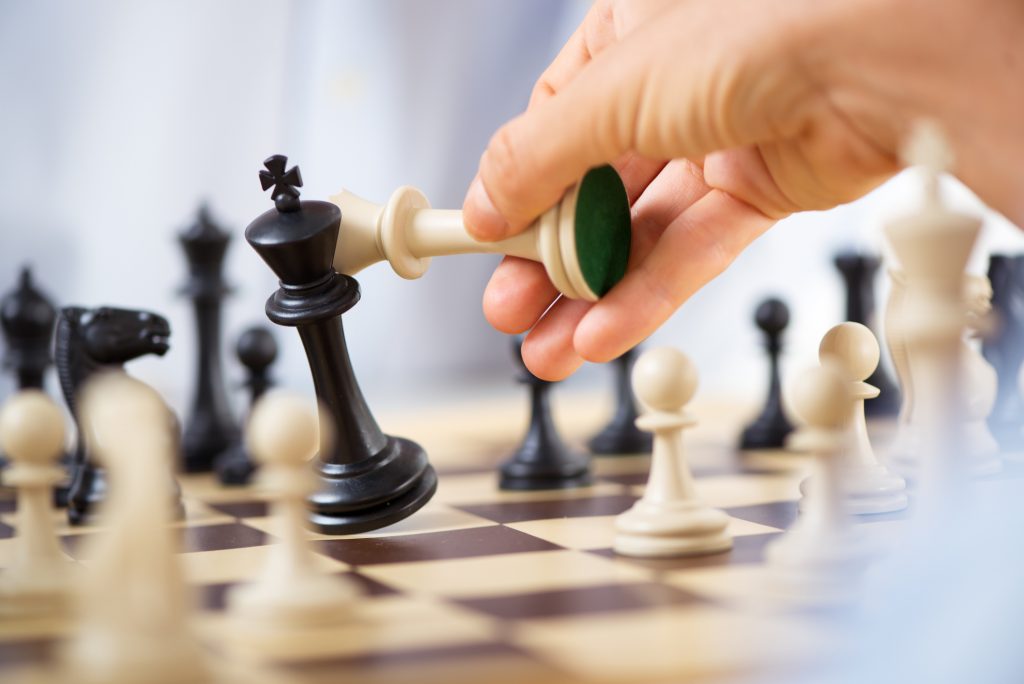 First, let me tell you how you win a game of chess (you’ll see why)…

Rule #1: Make sure all of your pieces are protected.

There are exceptions to this rule but in general just make sure you aren’t leaving anything hanging, that is, in such a way that the opponent can take it without being forced to “pay” for it.

The next technique is the one that most beginners don’t know…but it’s really important.  Basically, accumulate tiny advantages throughout the game.

An example is to have your rook on an open file, or to have a less exposed king than the other guy. Or to have a pawn that has no other pawns in front of it (so it can get to the other side more easily).

The idea is that while you are accumulating these tiny advantages, your opponent realizes you are crushing him when your advantage is overwhelming.

Now let me tell you how an investor can take the same view on his portfolio.
No company or stock is truly safe. I’ve seen amazing scandals happen and ruin companies very, very quickly.

But here are some examples of small advantages you can accumulate until, just like in the chess game above, you’ve put yourself into a better position.

Invest in a stock that correlates with a strong demographic trend.

Or, invest in stocks that have strong investors that also own them, like Warren Buffett.

Or, one of my favorites, you can own companies that have a lot of cash in the bank and no debt.

Oh, and I should tell you these guidelines…

If a company has a lot of cash in the bank and no debt, then it’s not going to file bankruptcy anytime soon.

If you want entertainment, it’s funny to watch the Yahoo! message boards.

Many of the people who post there don’t understand the difference between a stock and the company it represents.

Sometimes a stock will go down and people will start shouting on the boards, “They are going to file for bankruptcy!!!!”

So here’s an example of a totally safe stock (this is an extreme): Company XYZ is worth $100 million on the stock market but has $150 million in the bank.

In this case, someone could buy the whole company, shut it down, and still have $50 million left over.

And believe it or not, those situations happen. They were around in 2002 and in 2009 and buying baskets of those stocks proved to be very lucrative.

Not all stocks are that safe where they have more cash than they are worth.

But some stocks have assets that can be liquidated that will add up to more than they are worth. They might have real estate, for instance.

“If you think a company will be around 20 years from now, then it is probably a safe investment.”

For instance, Disney and Google will both probably be around 20 years from now. I don’t know if they will go up 500% from here, but they aren’t going bankrupt either.

Some people judge a company’s safety by its volatility. If it stays within $39 to $40 for an entire year, then a stock has very low volatility.

But that is just an illusion of safety. It can fall quite quickly in the case of a scandal. I’ve seen it happen. I’ve been in the middle of it. It’s horrifying.

The goal is to find that very unique combination of stocks that could go up quite a bit that also have a good margin of safety around them.

There are two sayings that apply to investing.

First, “those who chase straights or flushes go home on Greyhound buses.” In other words, don’t buy a stock hoping for a good earnings report as the only way you’re going to win on the investment.

And “if you can’t spot the fish at the table, then it’s you.” There are a lot of sharks at the table: hedge funds, mutual funds, day traders, Mr. Buffett, and so forth.

But if you accumulate tiny advantages you have a better chance of winning.

Posted in Articles, Investing, Wealth
This error message is only visible to WordPress admins