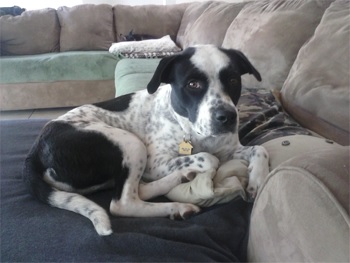 My dog’s name is Tucker. That’s Tucker right there. “Allegedly,” he’s a blue tick coon hound, but I doubt we’ll ever know for sure.

What I do know is that he’s a hunter. Watch out if he spots a bird or a squirrel. Once that happens, he goes into pursuit mode. He goes into a zone that is all but impossible to penetrate.

Every night, Tucker spends some time out in the yard doing his hunter thing. We live in the mountains, so it’s not infrequent that we might have coyotes or javelina passing by behind the fence. I think he feels that the louder and more intense he can be, the more value he is bringing to the pack.

Getting Tucker inside from this nightly event has always been a challenge. I used to go out on the deck and whistle and shout for him to come in. (Dear Neighbors, I know it looked like I was crazy, sorry!!) I don’t know if anyone ever caught me on video, but it was a sight, I assure you.

The longer I stood there and called to him, the louder I whistled, the more I got ignored. I know the sucker could hear me calling him. But he didn’t act like it. I wouldn’t be surprised if he actually enjoyed the whole process quite thoroughly.

One night, I chanced upon a way to get my dog inside that works almost like magic. I don’t go outside anymore and yell. I don’t stand at the door and whistle. Heck, I don’t even get up off the couch! In fact, doing any of those things only keeps the dog outside longer.

The Secret to Attracting Tucker

The secret is to sit there where he can’t see you and give a little whistle. “Come on Tucker!”

The reason why becomes obvious when you understand the true dynamic that’s at play. As it turns out, dogs like two things: they like to chase and they like to be chased. Once you get that, everything changes. Originally, I took the role as the predator. I was pursuing him. The dog felt that and reacted accordingly. I chanced upon the way to flip that around and put the dog in pursuit mode. And that’s all it takes.

I kid you not, it looks like magic. I chuckle every night when it works. And I look far less ridiculous when I don’t have to stand out there for 20 minutes calling to a dog who seems to enjoy ignoring me.

Connecting the Dots Between the Animal Kingdom and the Client Kingdom

Hmmmm…. now what does that scenario with Tucker remind me of? It’s very similar to the way things work when you work with clients.

It basically comes down to a simple but profound choice: attract or pursue. Pursuing clients is easy. You can start right away. The problem is, once you begin the pursuit, your prospect is alerted that the hunt is on. Just like my dog Tucker, the response to being pursued is wired into us humans. When we feel we are being chased, we tend to run away.

This is a problem. Especially if you’re interested in being the preeminent service provider in your space. It’s hard to chase someone down, convince them to work with you while at the same time maintaining their respect for you and asking them for a lot of money.

Unlike pursuit, attraction can take longer before it really begins to work. It’s a force you have to build and strengthen over time. Once the initial work is done and enough time has passed, the “force” begins to work its magic and clients start taking steps towards you. Once you experience that, and the benefits that come with it, you’re never going to want to get clients any other way.

When you are able to engineer attraction (that’s what you want to do, that’s what you can do), you become the prey and the client becomes the predator. This is a completely different dynamic and one that doesn’t jeopardize a long term and profitable relationship with your prospective client.

They come to you, and that changes everything. It especially changes how they receive the advice you give them and the service you provide. If you want to truly help clients and have them execute on your advice and respect your counsel, then you want them to come to you.

And so we look to the animal kingdom for clues about how exactly to do this.

As much as we might not like to admit it, we humans are not all that far from the animal kingdom. We share a lot of the same characteristics, especially once you dig down deeper than the level of our thinking brain.

We dress a lot better than the animals but we share similar actions. In the end, it comes down to a choice:

You can either chase or you can be chased.

In my experience, mastering the ability to be chased is worth the effort. You don’t have to master this skill, of course. You can always do like I did and just stand out on the deck calling to the dog. Unfortunately, it’s just not that effective. It takes a lot of energy and you end up feeling dumb standing out there yelling at beings that are tuning you out.