When I was a kid, every time I did something bad (which was often), my mom would say, “Don’t ever try that stunt again.”

As a result, I absolutely despise the word ‘stunt’.

Last year, some folks tried a stunt that I don’t think was helpful to anyone. It was the ‘occupy Wall Street’ stunt, and frankly, if those people really wanted to improve their lives, there are dozens of things they could do that would be a better use of their time.

For example, taking control of their own future through personal responsibility.

You and I will agree that’s the only path to true freedom.

And yet, while we speak, thousands of people are making plans to re-occupy Wall Street demanding changes from other people. If they only knew there was a much better way to achieve the American Dream.

Watch this important video for the truth about the American Dream. 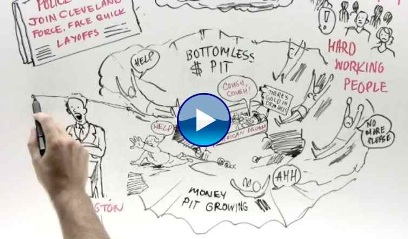 The American Dream is NOT dead…not for those who make the right decision. (One that doesn’t involve pulling ‘stunts’ in public places.)

The right decision is not about protests or occupation, it’s about creating your OWN financial independence on your own terms.

At this point, you have a choice.

You can continue to live “in the system” and be taken on a ride to its  logical conclusion (which won’t be pretty)… OR you can make a decision right now to take action towards living life on your own terms.

That’s what this message is about.

In it, you’ll discover what really is one of the last ways to “make it” in a system that is stacked up against you. Consider this video your lifeboat in the struggle against the rising tide of unemployment and an economy controlled by guys who are pulling silly stunts of their own.

Please turn up your speakers and watch this video until the very end.

There’s a unique twist a few minutes in that will surprise you, and I promise you have never seen anything like the beginning of this video before either.

“Between stimulus and response there is a space. In that space is our power to choose our response. In our response lies our growth and our freedom.” – Viktor E. Frankl