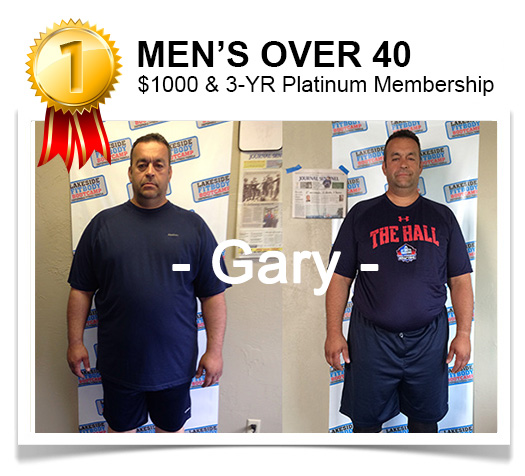 Today they’ll share their their tips and tools that helped their clients to get the winning results.

Daniel: There are a lot of different categories within the TT contest, but for the most part, your contestants are probably going to be overweight, intimidated, and probably have not exercised in a while. What type of exercise program do you normally start them with? Is it mainly bodyweight exercises or do you incorporate all your tools within your gym? Give us an example of a workout for someone who is very unconditioned.

Lesa:  At Lakeside Fitness we do account for people of all ages, sizes, and fitness levels so it is scary for them to kind of step out of their comfort zone. I design all my workout programs with three different levels so everyone is actually doing the same workout in the same room but basically at their own fitness level. Modifications are provided to all of my trainers so that they know.

For example, if you’re going to do a squat for 20 seconds or doing a 10-second rep, for a level 1, which is the regular squat hold — if you want to make it a little bit more advanced we can go into a drop squat or a continuous jump squat. It’s the same thing for lower body. If we’re doing a push-up, we start them off just in a regular push-up hold, progressing into a kneeling push-up and maybe for the more advanced a regular push-up or having a progression from there.

The strength days consist of using weights versus not using weights. So if we’re doing a squat, it would be a wall squat. If they want to use a weight, they can. Progressing it to the next level would be coming off of the wall using a weight, going into a regular squat — or if they want to — go into a continuous goblet squat up and down using a heavier weight.

So in every single session I have, I do have levels of modifications for everybody. So they kind of start off with the regular programs but we just look at what their strengths and weaknesses are and go from there.

Brent:  It’s similar for us. We start everybody within the same framework but we certainly have modifications for everything. We too have people that start at all different levels, all different ages and abilities, so everything is going to be modified as necessary to make sure that they’re not only comfortable with what they’re doing but the most critical thing is that they’re safe. We don’t want anybody to get hurt. That’s the primary thing. They can see progress that way, too, because if they start with something that maybe is fairly basic, they can see that they are making progress relatively quickly and that helps them build confidence going forward.

Daniel: Sure, and speaking of beginners, often times people can get discouraged in the beginning because they simply can’t do what other boot camps are doing in a class session. I guess one way to do it is change up the exercise, but do you also talk with them before class and say “hey, go at 50% today,” or “today’s a really tough workout so I’m going to make modifications.” “Don’t feel discouraged.” You’re not only changing the exercise but ultimately just after class talking to them and making them feel more comfortable and more encouraged rather than discouraged.

Brent: Right. It’s something that we’re very upfront with people as they come in because people are worried or they’re concerned what they can do. We tell them it’s not a competition. It’s a matter of we’re going to start you off at the level that you’re comfortable with and we’re going to build from this. Before the workout, we may go and talk to them and say “hey, these are some things that we’re going to want you to focus on today,” and certainly afterwards, too, just encourage them like “hey, you did a really nice job with that. How is it feeling? Did you feel like you progressed with that?”

You’re just keeping those communication lines open and if they are in the transformation contest, yes, it is a competition, but the only thing that they can do to make progress in that competition is just to do their best. We just remind them that that’s the best way to make progress. It’s just to focus on doing the best that you can on what you can do and as you do it, and if you stay consistent with it, you’re going to get better. Again, it’s just a matter of continuing to keep that communication open and keep that line of encouragement going.

Lesa: With new people or even people that are joining the transformation contests, I do explain to them that sometimes we have bad days or good days — and we keep the communication lines open. The main focus is we want to have proper form so we also want people to feel comfortable in their workout. If someone’s not feeling like they are able to do an exercise, we’ll definitely change it out right away. I don’t want someone walking out of my place feeling that it was either too hard or too easy. I want to make sure that when they walk out of my place knowing that they’re able to do the workouts, they feel successful in it and it’s something that does work for them.

My trainers and I talk to every single person that walks in the door as we’re signing them in, asking them how they are during that day, how they feel, if there’s anything that’s bothering them, any issues, some things that we need to pay more attention to. Then throughout that workout we talk to them two or three times. I usually have two trainers all the time in every class so we’re constantly having that open line of communication.

Daniel:  Especially talking to them before class, it is important. How are you feeling? How did you sleep last night? Is anything hurting? Is anything bothering you? That way you can go ahead and know that you can make modifications. Talk to them before the class starts so it’s a little bit easier transitioning for them. That’s something that’s great. That’s something very important.

Lesa: We do follow up once a month for our contests so I do have a check-in once a month. Depending on their fitness level we recommend either three to four times a week alternating between the strength and the HIT programs, or the more bodyweight cardio-type programs. We do stress overuse so if we’re starting to see someone that’s not at the level that they should be working out four times a week, we back them down and we explain, you may feel good right now but we don’t want to get hurt so we don’t want to go into that overuse injury.

On their days off, we do recommend some walking or some yoga, light activities. As we see them going through the 12 weeks and they start to progress a little bit more, they’re stronger, they look like they’re getting into that next level then we’ll kind of ask them hey, let’s step it up a little bit. You can add one more day to your workout.

Generally, most people start very deconditioned and so we work at them, try them on three days a week, maybe add one more if we can. Then our follow-ups, that actually all comes out when we kind of document this. All of our trainers document everybody’s progress and it gets handed to me at the end of the day so I know where everyone is at.

Brent:  We’re pretty similar that way as far as we’re typically recommending three to five sessions a week, but certainly those people that are coming in early are usually starting at the lower end of that and building up as they go if that’s what they need and if that’s where they’re at — but it’s certainly an individual process. We just advise them to make sure they’re paying attention to their body. Like Lesa said, it’s easy for people to get really excited and to really go after it and they’re not getting the proper recovery.

It’s important that they pay attention to that, that we’re paying attention, they’re keeping us in the loop and we just kind of track and see how they feel and kind of just adjust along the way. Certainly on off days, again similar to Lesa, just active rest whether it’s walking or other light activities that way.

Daniel: And are both your boot camps 30 minutes long?

Brent: Mine are, yes.

Lesa: Mine are 45 minutes long. We start off with a warm-up and then go into the exercises and we do a nice little stretch at the end. So 45 minutes, in and out.

Daniel: All under an hour which is great.
Alright, we just touched on progress a little bit. Let’s go a little bit more in depth. How do you track your progress throughout the entire 12 weeks?

Brent: We have a check-in process two times throughout on a minimum like every four weeks so we’re just kind of checking progress at those chronological points throughout that. Some people do check in more often. We just want to make sure that we are getting some check-ins still at that process just to ensure that we are on the track they want to be on. Other than that it’s really just making sure that we’re continuing to keep that communication open like Lesa talked about before the session.
Outside of a formal check-in, just kind of that informal check-in throughout the process. That’s not even only with our transformation clients. That’s with everybody. Just encourage them in and outside the session. Whether that’s outside the session it could be text message, it could be a Facebook message, either personal or just recognizing them in our VIP group on Facebook, just different things that way.

Lesa: It’s pretty similar to Brent but what I also add, we have an accountability factor. Once a week they come in before their class and they have to weigh in so we write down their weigh-ins once a week. Every four weeks, we do measurements and they need to submit in weekly goals as they reach them. So we basically kind of go through at the beginning of the week and jot down goals for this week. At the end of the week, they have to write in if they accomplished them or not. We do a lot of tracking and checking in with our members.

I set up a lot of meetings throughout the week with the individual ones that need to be held more accountable. The ones that I don’t see in the evenings, my head trainer will actually set up appointments, meet with them and then she reports back to me. So we really track as much as we can.

The meals when we get into talking about nutrition, that’s another thing that we really hold people accountable to what they should be doing. And then open lines of communication, just like Brent said. We’re constantly talking to them as they’re signing in and keeping track of what their days are like.

Stay tuned to EarlytoRise.com for the third and final portion of the interview. You can listen to the complete interview here.