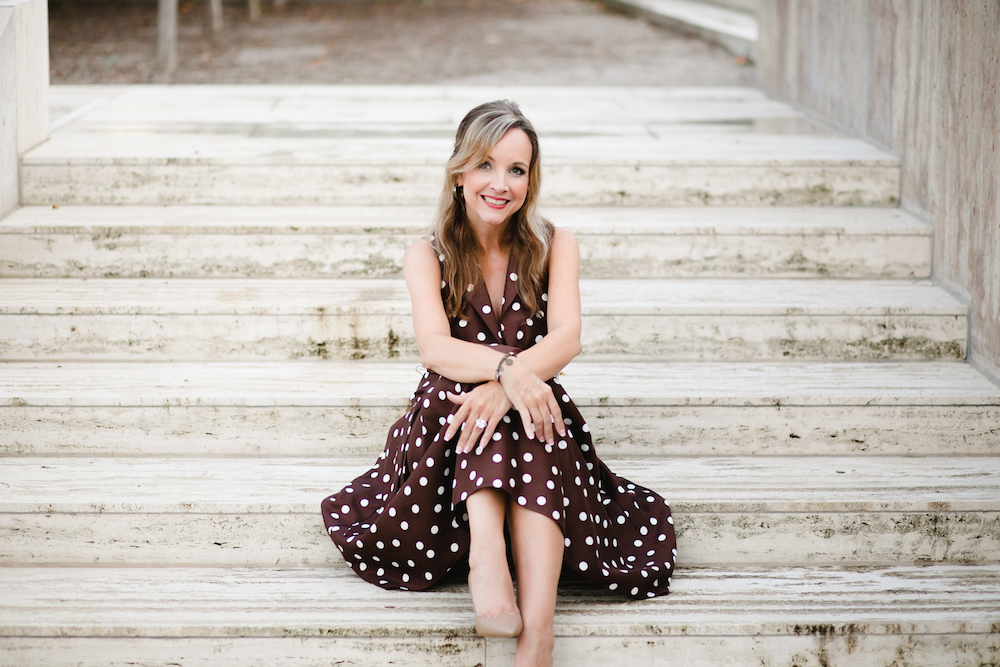 Those who don’t know the inimitable Carrie Wilkerson are missing out. A standard-bearer “barefoot CEO” with a vision and voice that celebrates diversity, opportunity, and entrepreneurial spirit, Wilkerson tours the world to share her message and inspire others. As a mother of four and a successful entrepreneur herself, she was the perfect interview subject to discuss the plaguing topic of gender inequality.

What she shared with us was both pointed and inspirational…

Let’s start at the beginning. Can you give us a “50-cent bio pitch”?

Well, I went the traditional path, like most people. I attended college, worked in the private sector, spent some time in government. My last “traditional” job was as a high school teacher.

Then, my husband and I decided to adopt our two older children and I opted to stay at home with them. Unfortunately, my paycheck did not agree, so I had to start my own work-at-home business.

Truthfully, that business wasn’t based on any big idea. It was just created out of the need to be at home with my kids. And I had some failed attempts before I was successful, but it all led to where I am now as a speaker and author, some 21 years after I started my career.

Using that as a backdrop, let’s get right into it. The gender-gap issue in business has been a struggle for decades. What personal experiences have you had with it?

The first experience that comes to mind was shortly after I left my job teaching at the high school and I was at home with the kids. We had a yearbook we published at the school—just like any other high school. Well, it turns out the yearbook company was hiring a rep to go to area high schools and market their services. As you can imagine, I was uniquely qualified to do just that. But when the local rep took the idea of me working for them to the hiring manager, he got this back: “She’s a mom now, and there’s no way she’d be able to parent and focus on what we do. She’d be too distracted.”

The irony is, the hiring manager was a parent of two kids and he worked at home. But he was a MAN.

Did you call him out on the obvious gender bias?

Well, I did say something to the rep who told me about the job initially. I told him the manager was making a big mistake. But I didn’t rail against it—I took the Bruno Mars route. You know, “If you don’t believe me, just watch.” [Laughs] I created my own company and worked circles around the guy.

Another example, going back a “few” years: I was a drum major in high school. I was a darn good one, actually, but my assistant was promoted over me because his stature and voice were “more conducive to leadership.”

I’ve seen gender bias at work in business negotiations, too. Because I live in the South, I’m often in conservative, male, evangelical circles. Male managers or leaders will ask my advice, but then validate it with the guy standing next to me. My opinions and ideas don’t always stand on their own. I don’t know if it’s because I’m a woman, I’m blond, or I’m short. Maybe all of the above.

I’m curious if you saw strong evidence of gender bias as a high school teacher. Can you speak to that?

I’ve seen some changes there, actually. When I was in school, our main organizational officers tended to be boys and the assistants or vice-presidents were girls. That was before we were super self-aware.

But I think it’s changed a little. My girls have all held high offices in their organizations and clubs. In fact, my daughter—who is the drum major at the same school I graduated from—was the assistant to two boys who tried to pull some patriarchal stuff with her. But she stood up to them and the faculty backed her up.

New generations. Millennials tend to be more open about female leadership. In fact, the vast majority of them aren’t even sure why it’s an issue at all. However, we still have a lot of Boomers and Xers in power who have pre-conceived notions about females.

That being said, I want to make this clear—I’ve never whined about the gender gap. I’ve called it out to certain event organizers, but it’s never about stomping my feet. At the end of the day, I think awareness is key, and that’s what I try to create.

As entrepreneurs grow their businesses, what should they keep in mind to avoid gender gap pitfalls?

It comes to gender-wiring. When we’re talking about our own businesses, we set our own prices and hours. WE decide what our value is. But because some women are “wired” to believe they’re worth less, they undervalue themselves. You just can’t do that—you have to take a hard look at the service or product you’re offering and see its true market value.

For instance, what is the difference between me and any other motivational speaker? Why would I not ask for as much as the guys who are drawing crowds of 15,000? Am I not delivering an equally valuable message to just as many people?

Ultimately, I think women need to be stronger negotiators. I was in a negotiation recently with a board of male execs and I knew they were low-balling me. So I laughed. They asked why I was laughing, and I told them that they were undervaluing me simply because I wasn’t “one of them.” Then I pushed the offer back and asked them to try again based on the JOB they were asking me to do.

Also—it’s also unfortunately common that aggressive women are labeled “bi***es” while aggressive men are “go-getters.” No more of that. Let’s get back to the job and what it’s worth—not the gender.

What about legal or structural obstacles to female entrepreneurs (as opposed to employees trying to climb the corporate ladder)? Did you face any of those personally?

I’m not sure there were any legal hurdles, but there were ingrained cultural ones. For example, my husband worked for me for 12 years while I was the primary bread winner. But when we were out negotiating for a loan or furniture shopping, people would defer to him on finances.

I still deal with a little bit of the gender stereotype stuff in schools, too. It’s really embarrassing in 2017, but there it is. Moms will make snarky comments about how my husband is at meetings and I’m not. I call them on it—the fact that I’m out doing C-level exec work sometimes while my husband is at home with the kids (or vice-versa, since he also does executive work) is a blessing for us. So what if I’m not at every parent-teacher conference? What matters is I’m invested in BOTH my family and my career.

I recently read that America is falling behind Europe in gender equality in the workplace. Why do you think this is?

Honestly, I think the statistics are skewed. Other countries tend to have fewer children per family than in the U.S. and in several European countries—like Germany—the women really do feel like family vs. career is an either/or choice. So much so that as women opt for careers, populations are declining. Governments are actually incentivizing women to have kids because of it. In Germany, the government offers what they call “Kindergeld” (child money) just so women feel like they can afford to raise a family AND have a career.

America is not built that way. For decades, we have said that we want both. Now, you can say that has fragmented society or done damage to family life, but the reality is that the existing statistics don’t reflect how companies are weaving family needs into careers. Or, for that matter, that there are a legion of stay-at-home moms who are running their own businesses.

And yet, I still feel as though women are pressed to make a choice in the U.S.—have a family or start a career.

I’m in the conservative, evangelical South, so yes, a big part of the population splits those two. Down here, women either want to have kids and stay home (or feel they need to), or they go against the cultural grain and start working on a career. But my platform counters these two options—I say it’s “all of the above.” You can make them both work—as long as they fit in with your core values.

What’s the subtext that still exists in conservative U.S. around that though? What judgments are implicit?

That whatever women do, it’s not enough.

There are people who say I can’t be present either as a parent or a career women because I’m doing both. But that argument doesn’t seem to hold for men. Why?

At the end of the day, everybody has to make the right choice for their family. Every family unit is different, anyway—It’s 2017, for the love! If it works for you, and you’re truly committed to it, then it will be strong.

Me and my husband really just want our kids to see a world full of options. When they see me on stage speaking to 15,000 people one day, and on the floor of their classroom handing out hot cocoa the next, that say something. It says that anything is possible. And I have no apologies for that.

What do you say to those who claim women are emotionally more erratic, and thus less able to steel themselves against the hardships of work?

As a women and mother of three girls, I have some experience in this arena. [Laughs] We do deal with hormones and emotions on a different level than men—that’s true. We are wired as empathetic beings and we tend to respect our emotions more than men.

But that’s not a negative. I think these qualities equip us better in our soft skills and relationship-building in the workplace.

All of this ties into the question that a lot more people are asking now: “Why don’t we have more female CEOs?”

I don’t think it’s because we’re deficient or lacking. I think it’s because what we want is different than men. Men might be tied up in titles and promotions, but women—and I know I’m generalizing here—are often focused on flexibility and satisfaction.

In other words, let’s not just jump to sexism as the answer. I think a big reason we’re not taking top corporate positions is because women are just more discriminating about what they want in life.

Not sure I can pick one, so I’ll give you two:

Last question: You’re often decked out in orange. Is that a statement?

[Laughs] It’s just my favorite—always has been. Red is too aggressive, but orange is just happy. So I’ve made it my power color. My appliances are orange, my car is orange, my phone is orange. It’s a reflection of who I am—a happy person with a lot of drive.

Don't let gender bias—or anything else—keep you from success. Learn how to keep yourself on track and build your career no matter what obstacles you face.