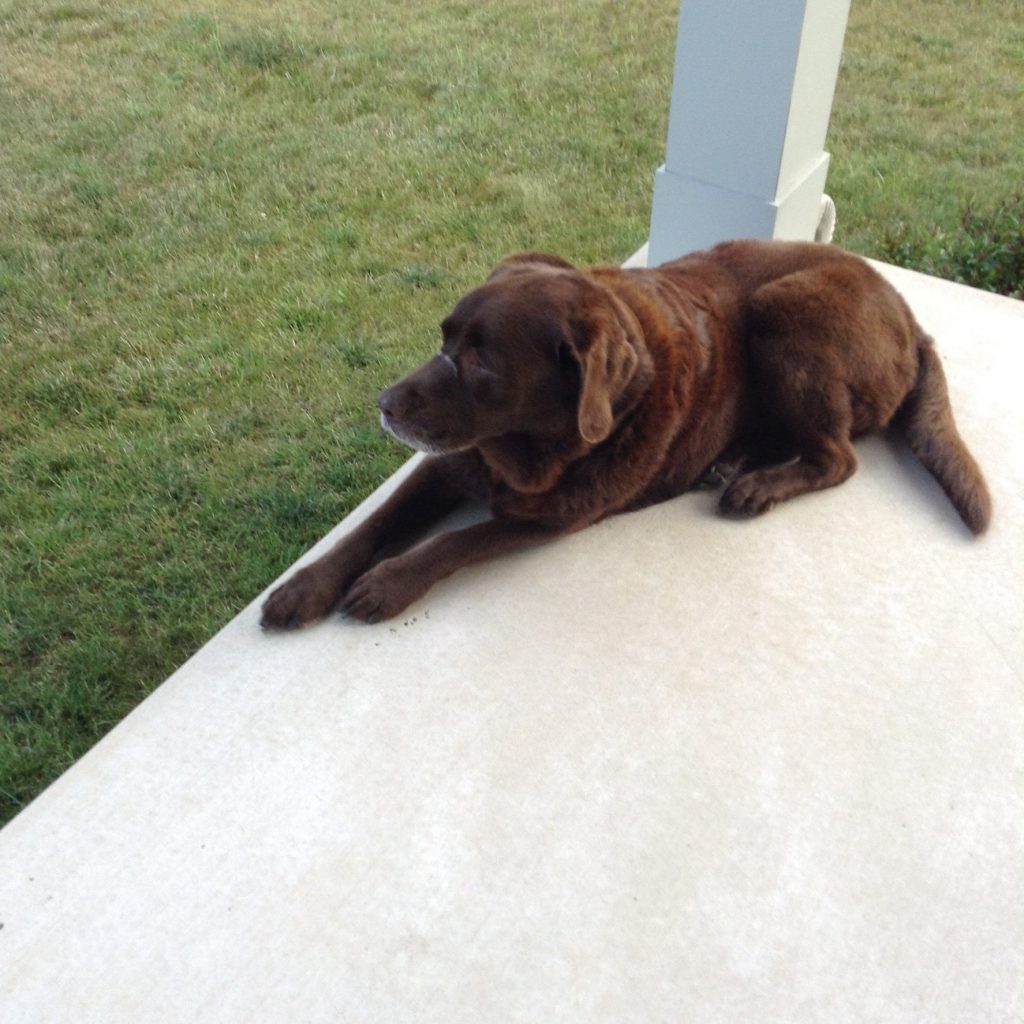 “Wag your tail, love your friends, bark at the moon, give lots of kisses, chase cats, play every day, eat what you love, and always see if you can get away with sleeping on the bed.”

This is the article I promised myself I’d never write. “When he goes,” I said, “I’m keeping it to myself.” But after he had left us, I started typing, and what became therapeutic for me will be helpful for you. And so I had to share.

Recently, my 12-year-old pup, Bally, got old and sick. It happened so fast. When I returned from a month-long trip, it seemed like he had aged 15 years. He’d lost so much strength that he couldn’t stand up on his own. I had to put my hands under his hips just to help him get outside.

It seems like just yesterday he was still full of energy, following me everywhere, begging for treats and barking outside at his imaginary friends. But now he couldn’t move, didn’t bark, and was barely eating.

I didn’t know what to do, and it was the not knowing that drove me mad. How much pain was he in? How much longer did he have? How and when would I have to make the awful decision?

I wanted to yell. I wanted to cry. And I did. This wasn’t how this movie was supposed to end, Mr. Spielberg.

But everything has to end, and so, on Monday morning, August 27, we went outside one last time.

He sat down in the backyard and surveyed his kingdom, where he had roamed as a young, strong dog. It was his domain; the place where he spent hours lying in the grass, barking, sniffing, and wandering down to the river on our big old farm property.

He put his nose up one more time chasing a scent, and I caught a glimpse of that young dog, wanting to get up and run. But he couldn’t, and in that moment, he looked at me and I knew he was ready to go.

It was harder than I thought it would be—10 times harder. You see, it’s not just the dog you have to let go. It’s everything wrapped up and invested in the dog. The last 12 years of my life, everything I had done—and maybe more importantly, everything I hadn’t done—was attached to him. He had been with me through growth, through pain, through failure, through evolution.

A dog does so much for you, and this little guy had changed the world for me.

He came into my life at my lowest point, the third week of my crippling anxiety attacks in 2006. He made them worst at first—a young crazy puppy with an unprepared owner—and then proceeded to turn my life around. He taught me to love unconditionally, to have more energy and enthusiasm for life, to welcome people with open arms, to give, and to be happy being me.

It sounds silly to say, but I was so proud of that dog—proud of his ability to lick an almond butter jar spotless with his long tongue; of how he entered a room excited, whipping his tail so violently it knocked everything down in its path; of how he chased deer through the fields without a hope in hell of catching them, but with an insane belief that he could.

I loved his stinky breath and his goofy, slightly embarrassed look when he squatted to poop on the neighbor’s lawn—as if he knew he was caught in the act. I loved our morning ritual of having him climb on my stomach and lay his head on my chest, a ritual we started when he was a puppy and kept up until just a few months ago.

Bally was 99% heart and 1% fur. It crushed me to see him in pain when all he wanted to do was love. My mom, who’s been taking care of him for the last six years, is going to miss him the most.

“Who’s going to greet me at the bottom of the stairs every morning?” she asked him that Monday morning in her sweet, sing-songy voice he loved so much. “Who am I going to talk to when you’re gone, Bally?”

Bally the Dog. The dog who never played fetch. The very good dog who didn’t chew up your shoes. The dog who touched hundreds of thousands of lives with his advice columns in my old Turbulence Training fitness email newsletter. The one, the only, Bally the Dog. You were just what I needed.

But life goes on. Epictetus, the Stoic philosopher, offered timeless words of wisdom to help us cope with extreme emotions in times like this:

“Suppose that our servant breaks a cup. We are likely to get angry and have our tranquility disrupted by the incident. One way to avert this anger is to think about how we would feel if the incident had happened to someone else instead. If we were at someone’s house and his servant broke a cup, we would be unlikely to get angry; indeed, we might try to calm our host by saying, ‘It’s just a cup; these things happen.’”

Put another way, “What would you say to a friend going through the same struggle? With your outside eyes, what advice would you give? Take that advice and apply it to you.”

Life goes on. New puppies are born. Children get a day older. Sales calls are made. Books have to be written. Newsletters have to be completed.

That’s not say, of course, that I’m not writing this in tears. But I also realize that many of my clients are going through much worse than I am. And yet, they persist, pushing ahead on their own hero’s journey. And sure, knowing this—and digging into Stoic perspective—doesn’t make me grieve less, but it reminds me to get outside of my own head and do things that matter to others. That’s how you heal, and why I appreciate the opportunity to pour my energy into my clients.

A few days before our final trip to the vet, a client asked, “Craig, do you ever feel like when something goes wrong, your mood changes and it’s really hard to get out of it?”

Of course. We’ve all had that struggle. When my anxiety was at its worst, my mood was terrible. Heck, my whole mental state was a mess. I’d spin my wheels, my mind would race, and minor problems would turn into catastrophes that would practically paralyze my decision-making.

But not anymore. Today, when challenged—as I am very much by the passing of Bally—I am guided by my personal motto:

We all have rough days. We all go through tough times. Bad things happen to good people. It’s inevitable.

But I take inspiration from the friends and clients who have suffered far more than I could imagine, and have still pushed ahead.

Just last week, in fact, one of my friends was in a bad car accident. His truck was totaled, and now he’s laid up in bed dealing with awful pain. To make things worse, he just opened a new restaurant and things are starting off more slowly than expected. His leadership team needs him daily.

But he’s staying optimistic. He’s doing what he can. And he has faith that he will heal as he helps his team, and will one day soon be standing in his restaurant again.

Around the same time, another friend was hit with a marriage breakup out of the blue. Ten years were invested in that relationship and they ended in an 11-minute phone call while he sat alone in a hotel room, thousands of miles from home.

It was a crushing blow, but he responded admirably. He didn’t wallow, but thought about what he could do to move forward. Why? Because action beats anxiety and work beats worry.

That same friend shared some wisdom with me that was incredibly impactful. I asked him if it would be okay to share it with you, and he agreed.

So I encourage you to save his words, refer to them often, and be strengthened by them so that you can persist through anything life throws at you.

“Pain is attachment to the past. Look, you and I know that the last few months have been tough. I had a great marriage for a long time. Then I didn’t. It’s not cut and dry. And I might never be able to trace each step along the way and identify the true root cause(s). And that’s okay. What I know is that when I feel sad/angry/grieving, it’s because I’m living in the past, not in the now. Sometimes I need to journal to get through or talk with someone. But once I’m back in the present, I’m productive and my head feels screwed back into place. Fighting acceptance is what causes pain.

We are all capable of so much more than we realize—if we take life step-by-step. I’m writing to you from the airport. In all honesty, I don’t want to fly back to an empty apartment and deal with that. Because I know it is going to suck. So I’m taking it one step at a time. I’m going to get on the plane. I’ll land. I’ll call an Uber. I’ll arrive at the building. I’ll let myself in. I’ll have a shower. I’ll sleep. And then I’ll wake up tomorrow and tackle that, too. I figure if I’ve been electrocuted, fractured my skull, had dozens of people I love die, broken my bones, and lived my wild life for decades, I can probably handle taking this one step at a time.

There’s always opportunity in crisis, Craig, and the best code of conduct is one that you’d be happy to live with for all eternity. Whether you believe in reincarnation, eternal recurrence, or none of the above, it’s still a wise place to begin your considerations.

So ask yourself: ‘If I had to repeat this life forever, would I shirk this responsibility? Or would I choose to man up and love freely where it matters?’”

Thanks to him, and thanks to you—your strength, resilience, and relentlessness in all of the trials and tribulations that come your way in life—I have been inspired to embrace this mantra for the future:

“If I were to repeat this life for all eternity, I’m happy with how I acted here.”

We are all in interesting stages of life, or “on our hero’s journey” as I call it. It is okay to have ups and downs, to question things, to question others, and most importantly, to decide what fits for your right life. That is the message that matters the most to you.

I know that Bally wouldn’t have lived a second of his life differently if he had the chance to change it. Maybe that’s why I loved him so much—and it gives me the strength and resilience to keep on going.