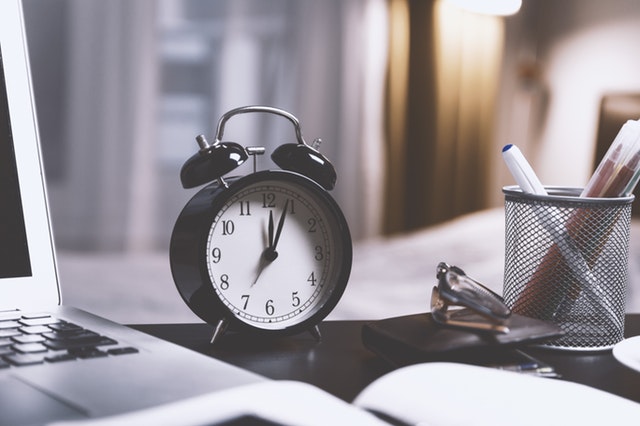 “Your idea is stupid!” she wrote. “Maybe it works for you, but I have three little kids at home. I don’t have time for that.”

I had just taken a shower after a morning of productive work and a noonday workout. I was feeling great. Now this.

I kept reading. She was criticizing a short essay that I had posted on my website weeks earlier.

This was in 2001 (before everyone and his uncle was giving the same advice).

The essay laid out a five-step plan for achieving any long-term goal. Briefly, this was it:

It was Step 1 that she objected to. Given her situation (with three kids at home), I guess it really did sound like a “stupid idea.”

So what should I tell her?

I could tell her to do what I did: Get up an hour earlier and devote that time to achieving your goal.

But I didn’t dare say it. It would sound flippant – not just to her but to every other reader that might have read my advice and had the same reaction.

She felt that her first responsibility was to take care of her family, and that left precious little time for anything else. For much of my adult life, I felt the same way. Most of my waking hours were spent working to support my family, and I used that as the reason I never made my movie or wrote my novel.

If you have been putting off a lifelong goal because you are too busy taking care of your family, you don’t need to hear that you should be doing more

deserve a medal for what you’re already doing!

Of course nobody’s going to give that medal to you…

So you have a choice: Continue to do what you are doing while pushing your personal goals down the road… or do something differently. Anything. Getting up an hour earlier and devoting that time to my goals is what I did. And it worked for me.

But here’s another idea– one that will, perhaps, work better for you:

Achieve your goal 17 minutes at a time.

This idea comes from Andre Dubas III, the author of House of Sand and Fog.

Dubas wrote the novel when he and his wife were both working. They had three young children and were committed to spending their non-working time as a family. He was a part-time teacher at several schools and was picking up construction jobs in between.

Apparently, he didn’t feel like he could wake up a full hour earlier to work on his book. But he could pare a little time off of the beginning and end of his day.

“Each morning, he started his commute twenty minutes early –17 minutes, to be exact. And each night, he came home 17 minutes late.

“At first, he pulled into an apartment complex parking lot and wrote in the car. But after 10 days, someone called the police to check on him.

Fortunately, he knew the officer. Dubas relocated to a nearby cemetery. It was quiet. Usually empty of people, especially at 5 a.m. and 6 p.m.

“Every morning, and every night, 17 minutes at a time, writing in pencil in a notebook. In summer, sweating with the car windows down; in winter, with the heat on until he got a carbon monoxide headache and had to stop. All the way to the end of the book.”

(By the way, House of Sand and Fog was a finalist for the National Book Award and was selected for Oprah’s Book Club in 2000, which of course made it a bestseller.)

So okay – getting up an hour earlier may be impossible for you. But maybe finding 17 minutes of spare time during the day – while commuting or waiting for an appointment or during lunch or snack times – maybe that’s a better ”Step 2” for you.

So your strategy for achieving your long-term goals would look something like this:

Step 1: Pick a personal goal that you’ve been wanting to achieve for a long time.

Step 3: Make progress on your goal in clearly defined stages.

Give it a try and let us know what you think in the comments below.

Posted in Motivation, Productivity, Self-Improvement, Time Management
This error message is only visible to WordPress admins