“Hang around others that make you Play UP a Level. Hire a coach, get a mentor, associate with better people, mastermind with like-minded achievers, and learn from highly successful people what makes them tick.” – Craig Code #5

Imagine you know a guy named Joe. He wakes up late and skips having a real breakfast because he believes the marketing that America “runs on Dunkin’s”. He grabs a coffee and a donut and slides into his seat at work about five minutes late.

Joe immediately starts answering email and his stress builds up.

At noon he runs out of the building, grabs some fast food, and races right back to work through lunch.

He’s still getting sucked into email and dealing with other people’s deadlines.

“Hey Joe,” a colleague says, waking him up. “You have that report for the boss? She’s not going to be happy if your weekly numbers are late again.”

Joe hits the panic button. He starts rushing through his new task, and gets it done just on time — even though it’s full of errors.

He thinks about calling home to let his wife know he’ll be late.

But he weasels out and sends a text instead.

He puts his phone away before she can reply, and he starts another mad dash on his work.

Jodi, from sales, is walking out the door.

She was up early, in on time, ahead of the game, and more importantly, out the door on schedule after having another perfectly productive day.

Joe and Jodi are the 2 types of people in the world.

And in today’s video, I’ll explain which one you want to be, and how to become that successful person rather than the one that struggles with failure.

Discover the 2 Types of People here 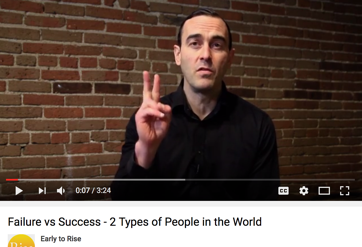 We’re going to be making more video content for you here at ETR.

After all, we’re the type of people that aim for success, just like you.

Become the person you need to become to achieve the results you want to achieve and to hit your big goals and dreams.

You expect extraordinary results in all areas of life — now go out and get them!