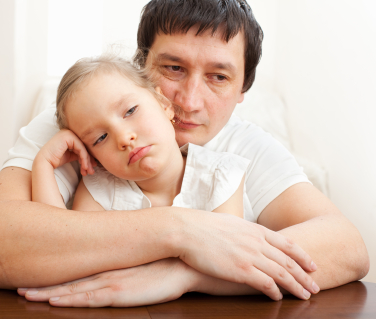 That sounds so horrible. And, in fact, it’s incredibly sad. Because, for many, the solution is a lot closer than believed, once you step back and take the time to see what’s really going down.

I’m not a psychologist, I’m just a guy who tends to spend a whole lot of time examining the modern human condition. And because I’m a dad who has chosen what most would consider an unorthodox path, I tend to focus a lot of my attention on the dynamics of being a dad. And, one of the questions I ask a lot is…

What does it really mean to provide for your family?

It’s not easy to answer for most dads, nor for moms. But, for me, being a dad IS a magical experience. Last night my daughter said to me, “Daddy, you work from home so you can be with me and mommy more, right?” “Yes,” I replied, “but even if I worked at an office, I’d still do everything possible to spend as much time with you as I could.” With that, she smiled, gave me a hug and a kiss and danced off to play with her friend.

I am fascinated (and saddened) by the widespread dad-kid dynamic I’ve seen unfold every day that pushes dads and kids apart.

I’m sure there’s some fancy psychological word for it, but I call it the Estrangement cycle. It’s easier explained as a short parable, the story of Peter.

Peter is a married father of two kids, a 4 year old girl named Janie and a 7 year old boy named Timmy. They’ve got a 4 bedroom house in a nice neighborhood with a pretty hefty mortgage and the thought of paying their living costs, along with starting to save enough to send two kids to college is freaking Peter out a bit. He wants the best for his kids, so he puts in long hours at work, so he can advance up the ladder and earn enough to send his kids to a better school, buy a bigger house and afford nicer things for the family.

At the same time, though, the job Peter is working at, along with the hours he’s putting in, are beginning to empty him out. He dreads Monday’s and gets home most nights long after the kids are asleep. Every day is filled not only with the stress of getting his work done, but the increasingly soul-sucking realization that what he’s doing has little intrinsic interest beyond a paycheck. And, on the rare occasion when he gets home in time to see his kids, whom he genuinely loves, he’s so burnt that all he can think about is hiding away from the family so he can “wind down.”

Peter’s home so infrequently his kids barely know him, and he barely knows them. Which makes Janie and Timmy not only desperate for random glimmers of attention from their dad, but also angry and frustrated at the fact that their daddy is never home.

And, here’s where all this pent up anger and desire starts to spin into something tragic…

Every time Peter is home early enough for dinner, his kids run and jump all over him. Why? Because they know it’s likely a short window, and they want as much of daddy as possible. If Peter loved what he did, he’d be more likely to come home in a far more energized, fulfilled state and have more to give. But he doesn’t, so his need to wind down and recharge his battery conflicts almost violently with his kids’ need to have more time with the dad they love and miss terribly.

So, as the kids clamor for Peter’s attention, he begins to withdraw more.

They’re all over him, and he can’t take it. So, he tries to push them off, to create a little space to breath. Janie and Timmy respond by getting even more aggressive with their need for attention because now daddy’s home, but he doesn’t want to be with them. So, they start to act up in a big way. Not out of genuine aggression but out of frustration. Daddy’s home, but he doesn’t want to play. Peter misreads what’s really happening and, already agitated from long hours and a draining job, gets pissed off wondering why his kids are so wild “all the time.”

And that leads him to withdraw further because it’s uncomfortable spending time with them. Janie and Timmy sense the withdrawal and fight even harder against it, making time together downright painful. As the cycle ramps up over months, then years, Peter chooses to work more so he’s home less and doesn’t have to “deal” with his increasingly alienated kids. Which, over the years, turns his kids’ desperate desire to be with him more into frustration, anger, alienation and, eventually, hatred.

What started as Peter’s genuine desire to provide the best possible future for his kids turns into a family that may benefit from wealth, toys, prestige and power, but those things become poor proxies for what the kids have really wanted from day one…a dad who’s there, truly present to love them, to play with them, to listen to and share thoughts, ideas and dreams.

Because what Peter never realized is that providing isn’t about presents, it’s about presence.

And, this doesn’t even touch on the dynamic between Peter and his spouse.

The question becomes: what do you do to stop the cycle?

As I mentioned before, I am not a psychologist, so all I can offer is thoughts and observations. But two things immediately come to mind.

First, a simple awareness of what’s really happening can go a long way toward identifying patterns and cycles. That awareness creates opportunities to deliberately break those patterns and cycles by changing your behavior. By committing to becoming more present, more engaged and involved. And, yes, that may well mean, difficult conversations, hard work and a healthy dose of apologies. It may also mean leaving money on the table.

But I’d rather pay the price in loss of “stuff” than loss of the extraordinary connection I have with my daughter any day.

Second, you may want to look seriously at the impact your career choices have had and continue to have on your relationship with your kids (and your spouse, lover or partner).

Is your job, regardless of what it allows your family to “have,” leaving you so depleted, stressed, angry and exhausted that they no longer get to “experience” what it’s like to have an engaged, loving, energized, present dad and husband?

And, are you left so burnt and estranged that you’re now largely incapable of drinking in the love, the conversations, the endless moments and opportunities that make being a dad magical?

Simple truth that us men have trouble wrapping our heads around…

Being a “provider” isn’t all about money, it’s also about “providing” love, attention, support, inspiration, compassion and guidance.

It’s about being there to snuggle and hug, to listen and play, to encourage dreams, and to foster within our kids an understanding, through our actions, that these are the things being a parent is all about. And, that, despite the fact that we need to work, we love, more than anything else, to be with them. That’s pretty hard to do when you’re never there or worse, when you’ve become so alienated from your kids, you’d all “prefer” to be apart.

Maybe if you’ve found yourself in Peter’s shoes, it’s time to call that family meeting, and some substantial evolution may need to unfold over time. And it might not be a bad idea to bring someone a bit more qualified to guide your journey forward.

[Ed. Note. Jonathan Fields is a dad, husband, author, speaker, A-list blogger and serial wellness-industry entrepreneur. Fields writes about entrepreneurship and creativity at www.JonathanFields.com and interviews emerging world-shakers at www.GoodLifeProject.com. His latest book, Uncertainty: Turning Fear and Doubt Into Fuel For Brilliance, was named the #1 personal development book of 2011 by 800-CEO-Read.]
Posted in Family, Lifestyle and tagged family, father, jonathan fields, parenthood
This error message is only visible to WordPress admins