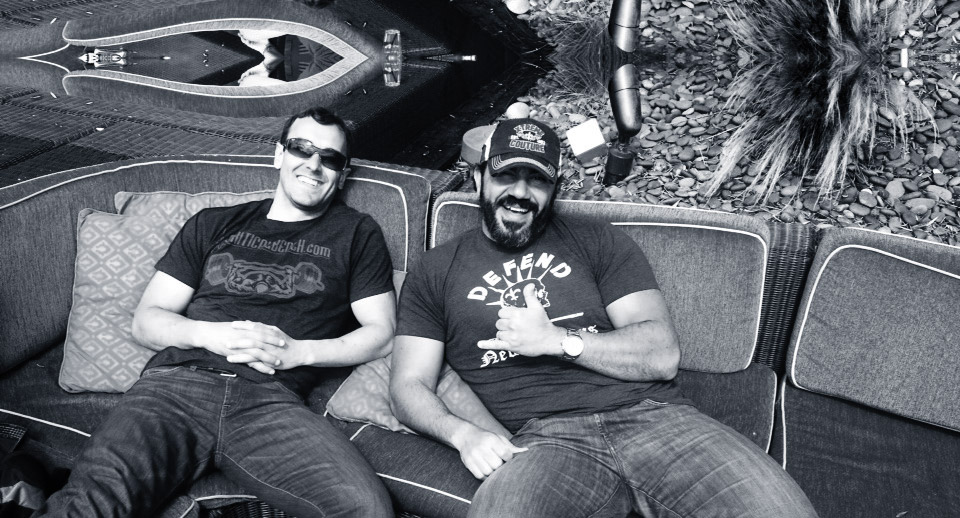 What I wouldn’t give for another hour with my father.

I’m joined by my friend and business partner, Bedros Keuilian. And Bedros’ dad was an immigrant from Armenia, who sacrificed everything to bring his family from the communist Soviet Union to America. My father was a farmer, who taught me the meaning of hard work and why you need to be a little bit crazy to succeed.

Craig: Every time I get to tell stories about him, it puts a smile on my face because he was a crazy old man and I say that with a loving heart.

Bedros: I come from a third world country, Armenia. We both have that immigrant edge mentality, Craig, because we were raised by fathers who valued hard work and that’s all they knew. Coming from a communist country, when we came to the United States, we were very poor. We were broke and my dad had to work multiple jobs.

It wasn’t until four years later that he scraped together enough money to open up a little tailor shop. And I would see him fall asleep at his sewing machine working 13, 14 hours a day.

I remember one time asking my dad if we can close the shop down early on a Saturday to go somewhere. Maybe it was to go across the street to Arby’s because I loved the Arby’s roast beef sandwich as a kid. But my dad looked at me and he said, “Son, work is holy. We’re never going to cut it short. We’re going to stay here until 7:00 PM. We’re going to shut the business down and then we’ll go.”

A lot of us complain about work, about our job, it’s Monday, whatever’s coming, our business, our empires. But at the end of the day, if we didn’t have a job, we wouldn’t have a purpose.

Being raised on a farm, there are very specific rituals and routines that have to happen when tending to a farm. How does help serve your life from there?

Craig: I think it’s really great that I realized the work has to get done. I mean, cows don’t take a day off of eating.

My father fed the cattle every day at 7:00 AM and 5:00 PM. It didn’t matter how cold it was. And I remember my father’s hands. They were cracked from the cold in the winter. He had lost parts of them in machinery. They were just the most beat up. His hands looked like they were 140 years old.

Even when he was 50 years old, and he had this dark farmer’s tan that made him look like he was Jamaican half the year. He’s always said, “Okay. You know what, you just go out and you do the work. You don’t get up and complain. You get up.”

The cattle were fed before he even had breakfast. And it was just that, okay, you do this. You do this work every day. You show up with your lunch pail. You do the work. Now it’s not to say that you can’t do higher level things. I mean, you have to think bigger. But you have to go out there and do a work.

I’m sure you learned from the great work your father had to do, the persuasion tactics he had when he was dealing with the communist party.

Bedros: That’s right, he has a fourth-grade education level. His best lessons he says were literally learned while trying to talk his way out of a trouble, or a problem, or potentially going to Siberia because word had gotten out that we were trying to escape to the United States.

And he had to kind of lie his way. Hey, those are just rumors. What are you talking about? I’m a communist party member. I’m proud. We’re pro Lenin, and we would never escape. And then, of course, a week later we’re in Italy escaping, right? Which was great, but one of the other things we’ve got listed here is to be a little bit crazy.

I remember when we came to this country, my dad only knew one person and it was a friend of a friend. And that friend, for whatever reason, decided to allow us to live in the spare bedroom of his two bedroom apartment. So there’s a family of five living in the spare bedroom.

The guy already had a job planned out for my dad and my brother, which was to join him on his paper route.

My dad has jars of thousands of dollars in about six or seven cans of Folgers coffee buried in our backyard. The man has created wealth for himself. And so while I thought he was a little bit crazy, that crazy got passed over to me.

How did your fathers teach you these lessons?

What we’ve learned from our fathers was not something that they sat us down and they gave us a lecture on or anything. We tune that stuff out. But it was the way that they acted. And if you want your children to be hard working in school, to be hardworking in their careers, to be entrepreneurs, to be big thinkers, you’ve got to do that stuff yourself.

Bedros: You’ve got to lead from the front where that’s concerned. I know that not all of us had amazing fathers. And Craig and I certainly aren’t saying that our fathers were picture perfect and they were there for every moment of our life, but when you go back retrospectively and look at the lessons you’ve learned and the character that you’ve built.

I’ve heard you once say this before and I hope you don’t mind me saying this. You said, “I’ve learned a lot from my dad of what not to do.”

I love my father to pieces. He’s alive and well. But the reality is that I spend more time with my kids because I’ve got that opportunity. He came into this country. We were poor. We were broke. Didn’t understand the language, the culture.

I’ve never thrown a ball with my dad. I’ve never gone anywhere that I have this fond memory of fishing or hiking with my dad. And so those were lessons as well.

So things that you might look at as pain or losses that you didn’t have in your life, you ought to probably consider reliving that with your second life as a father and a son, or a mother and a child, or whatever relationship, because at some point you’re going to be the parent and you could relive that youth.

I’m in the Guinness Book of World Records with my son. How cool is that? And those were things that didn’t happen with my father, but I could either be resentful towards it, or I can go, “You know what, I’m really grateful for what he did give me, and the things that I didn’t get, I’m going to use as lessons to apply with my relationship with my kids.”

Craig: My father had some bad habits.  always thought he was so smart. But I realized he really threw away a lot of his potential, and so, unfortunately, that taught me a lesson not to throw away my potential.

When I was young and stupid, I was drinking. But then I realized, you know what, this has got to stop. And fortunately, I did. And so it was a hard lesson that paid off in the long run. But in the end, I don’t really remember those bad things. What I remember most about him is the hard work that he did, the sacrifices he made, the way that he thought about doing things differently, and just, you don’t have to follow the crowd.

All right. That was a lot of fun. A great trip down memory lane for me back to the farm. But most importantly, you learned a lot about what it takes to be successful and how good habits can support success, while bad habits can destroy a good man’s life.

I’d love to hear what you think about today’s show and what lesson you learned from your father that guides you today.

Keep me posted and please email me at support@earlytorise.com or send me a message on Instagram, or on Twitter.

Posted in Early to Rise Radio and tagged business, entrepreneur, father, immigrant edge, lessons
This error message is only visible to WordPress admins