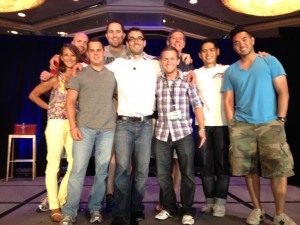 “Norm!” is what everybody screams as he comes walking into the infamous Cheers Bar. Even if you didn’t watch the TV Show, “Cheers”, you probably know about everybody loving it when Norm shows up.

The theme song even says it all – Sometimes you want to go, where everybody knows your name, and they’re always glad you came….

That’s the closest thing I can relate to the TT Summit. If I had not gone last year, I wouldn’t have the friends and relationships I have now.

For example, certified Turbulence Trainer Daniel Woodrum has opened his own 9 Round Gym in South Carolina since the first TT Summit. He also took a location from 13th to 3rd in sales (in just 6 months).

Had I not made it to the second TT Summit, I wouldn’t have been able to give him a fist pump and of course celebrate his success. I still keep in touch with him to this day.

Then there is Scott Rawcliffe, CTT, who stunned me when I first met him at the first TT Summit. He lives in Australia, yet he makes the effort to come out to this event each year because he knows it helps boom his business and life.

The reason he stunned me was because I was expecting this cool, Australian accent, yet it was this plain voice. Oh well. Because I knew met him through the TT Summit, he and I became good friends, and he showed me some amazing bodyweight exercises recently.

To top that off, he also showed everyone at the Summit a killer presentation on bodyweight exercises that I guarantee you haven’t used before. Let’s just say my hamstrings felt like I did 100 dumbbell Romanian deadlifts. The crazy part? – it was just a bodyweight exercise.

He is also killing it with his group training because I see people raving about it on facebook. He’s a great speaker and teacher, but has a poor Australian accent.  I look forward to seeing him again next year.

Then there is Ray Ortiz, CTT, who is blowing it up with his bootcamps. He told me about just 3 autoresponder emails bringing in 22 campers at $194 each, and the promo is still going. He’s expecting $6208 in gross profits with just these 3 emails he learned about.

The income is great, but more importantly; he’s making an impact on the 1 Million Mission. All he did was put into action what he was taught. I wish him continued success up in Canada as he continues to dominate with his bootcamps.

Brian Kalakay, CTT, who has more energy than the Energizer Bunny infused with B-vitamins and caffeine, is about to release his first info product that I know for sure that my readers would benefit from. He is teaming up with Bedros Keuilian, the Armenian Comedian, on this project and trainers all over the world will benefit from it, which falls right in line again with the One Million Mission.

It’s amazing that my first TT Summit was in August of 2011. I had a non-existent online business at that time. I also wanted my wife to be a stay-at-home Mom, but I didn’t know how I was going to make that happen.

Fast forward 9 months, and this is the announcement I was able to make to all the TT Summit attendees, also known as my extended family:

“My wife is officially a stay-at-home Mom!”

And to put icing on the sugar-free, gluten-free cake (this is a fitness article – that’s why), my online business has allowed me to produce a full-time income.

So, not only do I contribute to the 1 Million Mission, but I became a transformation myself, along with the other Certified Turbulence Trainers. There’s certainly a difference between certifications and seminars compared to missions and life events.

That’s why I love the TT Summit. It attracts action takers and creates incredible relationships, challenging you to become better. I call it the “Cheers” of Fitness Events. There are so many more success stories like these.

What Would the Second TT Summit Bring?

I didn’t think the second TT Summit could top the first one since that original Summit has so much sentimental value to me. But sure enough, it over-delivered.  The bootcamp sessions from Craig were brutally effective, and I put the trainers through a 3-minute finisher that caused some dirty looks (also known as “good times”). 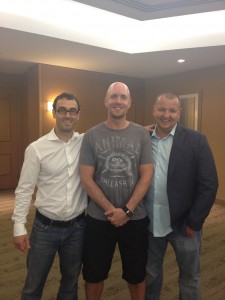 Alwyn Cosgrove, who has been a big impact on my programs and clients’ success, along with Craig Ballantyne, gave an amazing and invigorating presentation on creating a 7-figure facility from scratch. By the way, it’s not what you think.

Cara Eckerman, who was supposedly nervous, gave everyone a blueprint on how to explode your bootcamps in just 90 days. She has so much passion. It’s really fun to see her present.

The Armenian Comedian (give it time – the nickname will be a hit soon), Bedros Keuilian talked about connecting with people, and how they buy on want, not need. He also explained exactly of how to go from one-on-one training to group training. When I had an offline business, I used these strategies that helped me leverage my time so that I could create my online business.

Just implementing one of the tools that Craig Ballantyne showed us over the weekend, I had written two 800-word articles, shot six Youtube Videos, worked out and caught up on all my emails before noon recently. He showed us how to triple your productivity and I can’t get enough of that stuff.

I learn so much at these TT Summits, but I would honestly go and just sit in the room and soak up the energy because that alone is worth the trip.  To me, the information and tools that you discover are just a bonus.

We all stay in touch through Facebook or email and we always celebrate each other’s success. But there’s something about coming all-together, after a full day of learning, face-to-face; celebrating our victories each year and being a part of the One Million Mission.

I’ll see you at the Cheers Bar next year? I hope so.

To the One Million Mission,