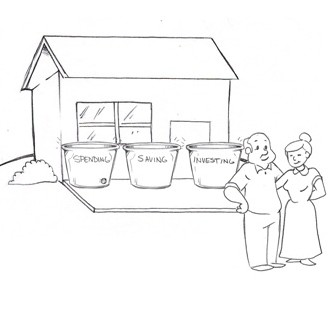 The money-management system that I’ve used to generate more than $50 million in wealth is quite simple–a far cry from the complicated systems I was enamored with thirty years ago, when I was just beginning to learn about money.

Those systems felt exotic, secret, exciting. But as the years passed, I found they did not work as advertised. Eventually, I realized that sophisticated financial programs are like complicated toys. They look fantastic on the shelf – but when you go to use them, they eventually break… and when they break, you can’t fix them.

As simple as it is, the system I’m going to introduce you to today will provide for all of your financial needs. It will allow you to live well now… and live well in retirement.

As Palm Beach Letter subscribers know, our first rule for building wealth is “Never, ever lose money.” The primary characteristic of this plan is safety.

Our second rule for building wealth is “Grow at least a little bit richer every day.” And the second (and equally important) characteristic of this plan is its dependability. It will give you a regularly escalating net worth without significant setbacks.

I call my system “The Secret of the Golden Buckets.”

Imagine a golden well with three golden buckets on the ground in front of it. One is labeled “spending”… the second is labeled “savings”… and the third is labeled “investing.” 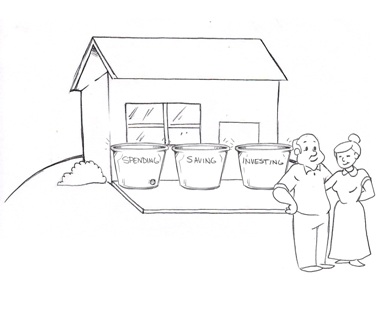 There’s a sign on the well that challenges you to try your hand at a game. To win, you have to fill all three buckets to the brim.

It seems to be an easy challenge, but there are two problems:

The well will give you only so much water within a given time period.

If you look closely at the golden bucket marked “spending,” you notice there is a sizable hole at the bottom of it. 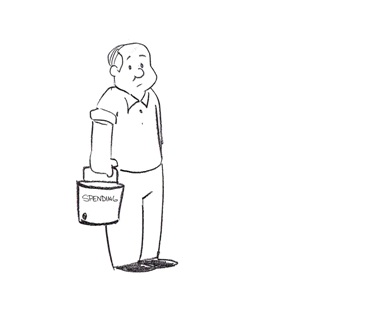 If you manage to fill all three buckets, you win–i.e., you’re rich!

So can this game be won? It can, if you play it smart. And you can win it relatively quickly if you use my system.

The Golden Bucket of Spending

I grew up relatively poor, the second of eight children. My father earned $12,000 a year as a college professor. As a teenager, I was ashamed of our small house, my hand-me-down-clothes, and my peanut-butter-and-jelly sandwiches.

I dreamed, literally dreamed, of living like a rich man. And so, when I got my first job at age nine as a paperboy, and then at twelve as a lackey at the local carwash, I would spend my money on luxuries, like a pair of brand-new Thom McAn shoes.

I tell you this to emphasize a key part of my system. I don’t believe in scrimping severely to optimize savings. I believe you can live a rich life while you grow rich, so long as you are willing to work hard and you are smart about your spending.

During their twenties, they spend every nickel of their modest income to make ends meet. At that age, it is nearly impossible to put aside money for the future.

During their thirties, their income increases. But this is also when they start a family. Expenses soar. There are more mouths to feed, a “family” car to buy, and the dreaded down payment on a first house. They manage to save a little during these years, but not nearly as much as they thought they would.

If they work hard and make good career decisions, their income climbs much higher in their forties and early fifties. They have more money to put aside for the future, but they are also tempted into buying newer cars, nicer clothes, more exotic vacations, and–the biggest wealth stealer of them all–that dream house.

In their later fifties and sixties, their income plateaus or even dips… and they may have to start shelling out for college tuition. Aware that their retirement funds are being depleted rather than enhanced, they invest aggressively to try to make up the difference.

Finally, sometime in their mid to late sixties, they realize that they don’t have enough money to retire. They have spent almost forty years working hard and chasing wealth, but they never managed to attain it.

It’s sad, but it’s the reality for most people. And it is just as true for high-income earners (doctors, lawyers, etc.) as it is for working-class folks.

There are two lessons to be drawn from this: First, it is very difficult to acquire wealth if you increase your spending every time your income goes up. Second, setting unrealistic investing goals means taking greater risks. And taking more risks, contrary to what many pundits say, will almost always make you poorer… not richer.

The truth is, there is only a marginal relationship between how much you spend on housing, transportation, vacations, and toys and the enjoyment you can derive from them.

In fact, there are dozens of ways to live like a millionaire on a modest budget. If you learn those ways, you will have a tremendous advantage over everyone else at your income level. (In future issues, I will give you lots of ideas for “living rich” without spending more. But for the moment, I am just going to assume that you agree this makes sense.)

Make smart spending decisions. Remember, the spending bucket has a hole in its bottom. Every dollar you put into it will be gone by the end of the year. Stop thinking that because you’re earning more money, you should be spending more. Your future wealth is determined by how much you save and invest, not by how much you spend.

So here’s what I’d like you to do: Figure out how much you need to spend every year to live your own personal version of a “rich” life. It might help to spend a few minutes thinking about all the things you truly enjoyed last year. If you are like me, you’ll find that almost all of the things you enjoy require very little in the way of money. (Those are the true luxuries.)

Keep the biggest wealth-stealing expenses–like your house, your cars, and entertainment–to a necessary minimum. And eschew any expenditure that has a brand name attached to it. Brand names are parasites that gobble up wealth.

What you are doing is determining the size of your spending bucket. It should be smaller than the bucket you used last year, but big enough to contain inexpensive luxuries that will make your life truly rich.

Don’t nod your head and promise to get to it sometime in the future. Do it today. Estimate, as well as you can, what you need to spend each year to have the life you want. I call this your LBR (lifestyle burn rate)–and I’ll be talking more about it in an upcoming essay. This is a number that you must have firmly in your mind, if you intend to be a serious wealth builder.

[Ed. Note: Mark Morgan Ford was the creator of Early To Rise. In 2011, Mark retired from ETR and now writes the Palm Beach Letter. His advice, in our opinion, continues to get better and better with every essay, particularly in the controversial ones we have shared today. We encourage you to read everything you can that has been written by Mark.]
Posted in Investing, Personal Finance, Wealth and tagged guidance, make money, success