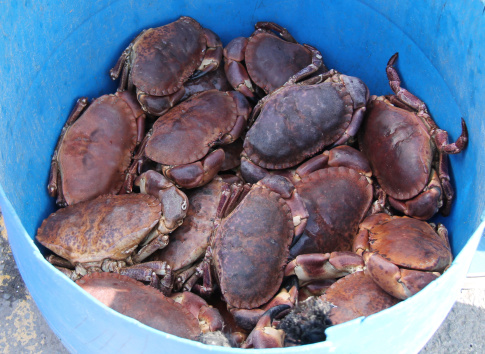 Several years ago while on an adventure to Alaska I experienced what I can only call one of life’s greatest lessons.

Like many of life’s big lessons, it came about unexpectedly yet at a time when I needed it the most.

It was a mid-summer’s evening, and the sun was still hours away from its midnight sunset. While taking a walk along the shoreline in Ketchikan Alaska I noticed several crab fisherman casting their nets, waiting a few moments, and the pulling in a couple crabs at a time.

One fisherman had a bucket full of five or six crabs in it. It looked like a run-of-the-mill five-gallon paint bucket that you’d find at the local Home Depot. There were several inches of water at the bottom of the bucket and these crabs – some the size of my palm, and others the size of my head.

As I stood there watching how this crab fisherman went about his trade I noticed that one of his crabs from the bucket was climbing on top of the rest. It was making a break for freedom, and I silently cheered it on. I could tell it was the most ambitious crab of the bunch.

Somewhat awkwardly, it would step from crab to crab, getting higher and higher, and eventually was able to extend its front legs right up to the lip of the bucket. He was just inches away from escaping the paint bucket prison.

Recognizing that the fisherman likely depended on this crab for his meal ticket, I alerted him that the Steve McQueen of the crab world was about to make his Great Escape.

He nodded knowingly, and said, with a little condescension for a naïve landlubber like myself, “You just watch what happens.”

As this ambitious crab started pulling himself up to get over the edge of the bucket, all of the other crabs reached up, grabbed his hind legs and pulled him down to the bottom of the bucket.

Minutes later the same scene repeated itself. I was in awe, but also aware I had just learned a valuable life lesson.

I instantly realized that I was experiencing a similar situation in my own life. You see, I had recently made one of the dumbest mistakes of my career. Earlier that year I had partnered with a few guys that I soon realized were negative and scarcity-minded. They always found a way to squash my dreams each time I’d share it with them.

Yet I continued to hang out with them. In fact, I kept them in my circle of influence, and shared my most lofty goals with them – only to have my ambitions squashed by their negativity, doubt, and scarcity thinking.

I wanted so badly to soar with the eagles, yet I was hanging out with turkeys.

I suppose it was just comfortable to be around the people I knew, even if they did stunt my personal and professional growth, rather than to find a new circle of influence who would support me, challenge me, and encourage me to achieve and surpass my goals.

Fear of the unknown stopped me from achieving my dreams sooner.

But things changed for me after that day in Ketchikan, Alaska.

When I got back home I committed to creating my “bubble” and cutting out all of the crabs and turkeys in my life. My bubble was my protected circle in life. I became the gatekeeper of my bubble, ruthlessly choosing who was let in and who was kicked out.

It wasn’t easy to do, but I cut ties with the crabs in my life.

No more crabs, no more turkeys… only eagles are allowed into my bubble these days.

We’ve all heard the saying… your income is the average of the five people who you surround yourself with the most.

But you can also say it this way; your head space, your personal development, your attitude, your contribution to society, your personal and spiritual growth in life are all an average of the five people that you surround yourself with the most.

If the people in your circle of influence are crabs, energy vampires and low tone then that’s the effect that they’re going to have on your life.

You’d say the same to your clients and employees, right?

You’d want your clients to surround themselves with people who support them, lift them up, and encourage their decisions as they work towards reaching their life goals

That’s what I want for you.

You’re an eagle, but you’ll never soar as high as you can if you hang around with turkeys and crabs.

Put yourself around the people who will support, encourage and challenge you to get to your goals.

One of the best places for that is the 1-Day Mastermind Coaching Sessions that I run with my good friend, Craig Ballantyne. Our next event is Friday, April 4th, in Orange County, California. If you’re an online business owner in any industry, you absolutely need to come to this day and have a dedicated hot seat session in a positive Mastermind setting. Craig and I will fix the holes in your business and send you on your way with a proven plan for turning your ideas into a 6-figure business in less than 12 months.

If you’re interested in this exclusive opportunity (only 7 spots remain), email my new 1-Day Mastermind executive assistant, Joan, at Joan@Keuilian.com

Craig and I look forward to helping you soar like the Eagle you deserve to be.

[Ed Note: Bedros Keuilian is the embodiment of the American Dream. Arriving in the United States from the communist Soviet Union back in 1980, his family went from being broke to eventually adding value to their new community. Today, Bedros helps over 45,000 fitness experts grow their businesses. Bedros knows the American Dream is NOT dead, because he is living it right now. So are the folks in this inspiring video – watch it now.]
Posted in Careers, Self-Improvement, Skill Development
This error message is only visible to WordPress admins