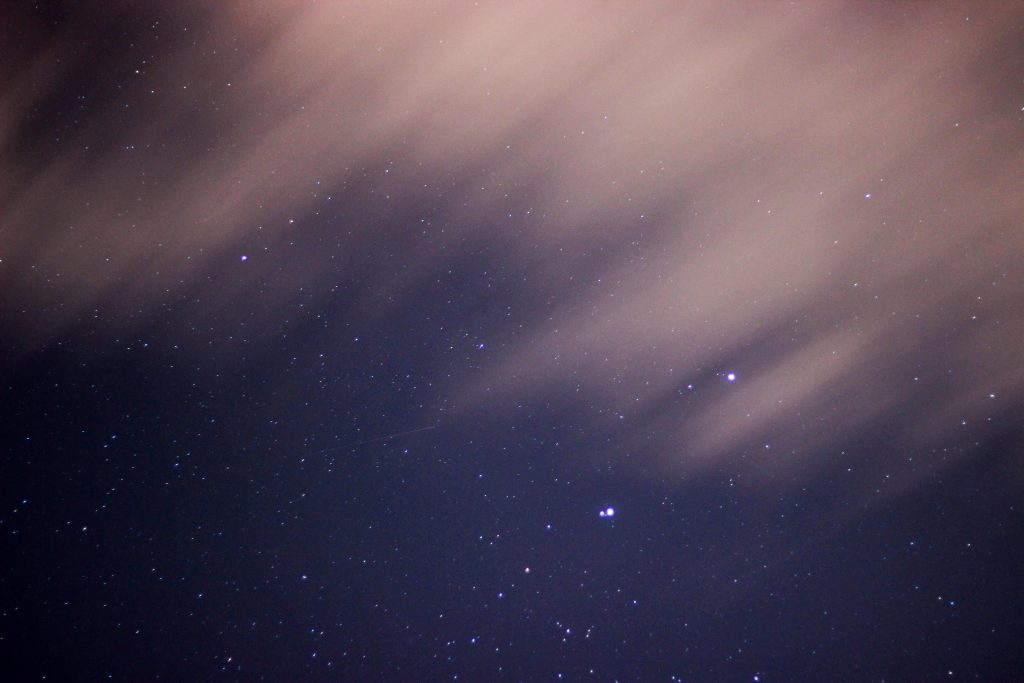 “There’s a starman waiting in the sky, he’d like to come and meet us but he thinks he’d blow our minds.”

Only…the song is not about a star man.

It’s about the loneliness of two boys. The song starts with a boy late at night listening to the radio. He’s by himself. Thinking there must be something out there.

Then he hears something amazing.

So he calls his friend. Perhaps someone equally lonely, late at night by himself.

“I had to phone someone, so I picked on you. Hey, that’s far out, so you heard him too?”

David Bowie was lonely. He was ostracized by the rock stars before him (The Beatles, The Rolling Stones). He was sexually ambiguous. It was unclear still (even to him) if he was a good musician or not.

And out came “Starman.” And the song changed his life. It changed your life and my life.

He wanted to connect with people like him. He was lonely. He wanted his art, his expression, to touch someone. It touched the world.

I felt like that little boy. Waiting to hear from some mysterious space man that would change my life. “Cause he knows it’s all worthwhile.”

I wanted someone to call. “Hey, that’s far out. You heard him too.”

I’m always afraid of loneliness. Often if I’m by myself I go out and try to meet people. Or I call a friend. Or I force myself to go to a party I don’t want to go to.

But when I’m lonely and use the power of loneliness, often the best things happen to me. I can’t ever forget that. Even the worst times of loneliness.

A rare opportunity allows U.S. retirees a chance to make $10,000s over the next few months… no matter what your income. Click here to learn more before the doors close.

That magic art of turning solace into soulfulness and creating art of it.

Rather than seeing yourself through the mirror of others’ eyes (a desperate addiction of mine), being forced to look within and confront what’s there.

I’m always afraid what I will find. I’m always gratified after I do it.

Introverts power up when they are by themselves. Not everyone is a pure introvert or pure extrovert. But I tend towards introversion.

I like being around other people. But I know I regenerate when by myself.

If I’m by myself for a day, it’s as if I have recovered all of my superpowers.

When I’m alone, I’m more disciplined. I read, I write, I try to learn things. I come out of periods of loneliness with knowledge I never would have had otherwise.

Sometimes when I’m lonely I’ll go outside. I’ll watch people. Sometimes I’ll see someone interesting. I’ll go down in the subway with them. I’ll get out at their stop. I’ll follow them as long as I can.

We spend so much time living in the illusions of our own lives we forget about the beauty and knowledge contained in the seven billion other lives on this planet.

To be able to overhear one conversation, to see one thing normally hidden by people from others, to talk to one stranger, is to open up an entire new world to ourselves that we can learn from.

When my dad died, I felt infinitely sad. Like a black hole in my life had opened up and everything was being sucked into it.

I learned to live with that hole. I reached back and dived into my memories of him in a more personal way than I ever had before.

I still pass his office building, where I spent time as a kid, and feel that pang of loneliness from him not being in my life.

But I learned from him. He lives in me. I take that sadness with me everywhere and bring it to every situation I live in.

It’s that way with all loss in my life. With everyone I have been with and the sadnesses that add up when I miss them. I miss my friends the second after “goodbye.”

Without that loneliness I would be less of a person.

With that loneliness, I learn how to better treat the people who are currently in my life. To know that every love is finite. To treat it with the respect that such antique rarity deserves.

David Bowie lived directly across the street from where I live now. He had an office in the same building I once worked.

One time I was in the elevator of that building.

I walked over to his apartment this morning, about seven months after his death.

I took a photo. It’s still filled with messages from people who missed him. Missed their star man. Missed their friend that they grew up with.

And then I wrote about it.

“I had to phone someone, so I picked on you.”