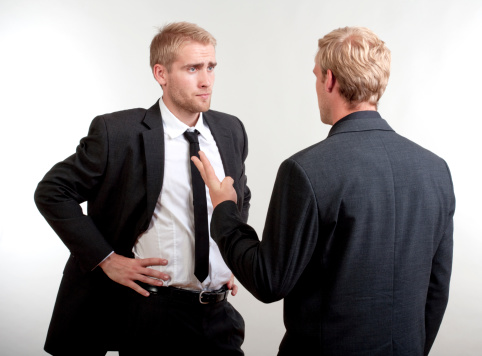 One of the most time-wasting and exhausting exercises I can think of is being sucked into a debate — especially if the debater has tapioca between his ears. An argumentative person is not only unpleasant to be around, he also can consume large chunks of your time — time that could otherwise be used in beneficial ways.

An accomplished, incurable debater has the potential to frustrate and exhaust you to an alarming degree. Because relationships with debaters have such great potential for slowing you down, it’s important to be able to recognize when you’re in close proximity to such an individual.

To help toward that end, I have summarized below the Ten Dirty Tricks of Debating, which are the most commonly used tools of the debater’s trade.

Basing one’s argument on a false premise is one of the oldest tricks of clever debaters. It’s a mainstay of most political debates, wherein politicians find that they can slide a false premise by sitcom-damaged brains without much effort. Worse, supposedly opposing parties (as in, Democrats and Republicans — or, more appropriately, Demopublicans) begin most of their debates with joint false premises, thus giving viewers all the more reason to assume that such premises are correct.

Dirty Trick #2: Using the Desired Conclusion as a Premise

Using the desired conclusion as a premise — sometimes referred to as a priori argument — is just a bold version of basing one’s arguments on a false premise. The debater who employs this tactic merely restates his own conclusion as though it were a fact.

Dirty Trick # 3: Putting a Spin on a Negative

The term spin refers to the art of cleverly and smoothly twisting the truth, and it is now considered an essential tool for those who have dedicated their lives to the art of debating. The objective is to take a crystal-clear fact that negatively impacts the spinner and twist it — i.e., “spin it” — in such a way that it gives the illusion of being a positive.

Some people are world-class actors when it comes to feigning indignation in situations where they realize they’ve been caught in a lie, misstatement, or worse. I have a simple rule when it comes to indignation: The louder and more vehement the protest, the less credence I give to the person’s indignation. As Emerson put it, “You shout so loudly I can barely hear your words.”

Dirty Trick #5: Taking the Offensive when Overwhelmed by the Facts

Taking the offensive with an aggressive, all-out attack is a strategy that goes a step beyond just feigning indignation, and is often employed when the facts appear to be undermining one’s arguments. The more overwhelming the facts against the dirty-trick debater, the more aggressive he becomes and the more effective he is in getting the other party to back off.

Making intimidating accusations is another trademark of political debaters, the objective being to put the other party on the defensive. Some popular accusations, both in and out of the political arena, include: “You’re just selfish”; “You don’t care about starving children”; and, the ultimate intimidating accusation, one that quickly brings most people to their apologetic knees, “You’re a racist.”

Switching the focus of the conversation is a convenient way to escape being overwhelmed by the truth. Straying from the main point and changing the subject is a dead giveaway that the facts are closing in on the debater. Criminal defense attorneys employ this art when they distract the jury’s attention from any damning evidence against their clients by focusing on side issues and irrelevant topics.

There is a whole school of thought that revolves around the idea that everything is relative and therefore nothing can be proved. The philosophy of relativism teaches that the premises people use to make judgments vary according to their genetic makeup, backgrounds, and environments. However, an axiom is a self-evident truth that requires no proof, and rational, honest people do not require proof for self-evident truths.

You do not have to prove that the sun comes up each morning, but there was a time when it was necessary to prove that the earth revolved around the sun. As with invalid analogies, if you allow someone to base his argument on the contention that a self-evident truth cannot be proven, an invalid conclusion is also a forgone conclusion.

While esoteric language makes for good entertainment, you should never allow someone to use it against you in a debate. I am an advocate of Occam’s Razor Principle (also known as the Principle of Parsimony), which states that the simplest and most direct explanation is generally the best explanation. Making explanations more complicated than necessary is often nothing more than a smokescreen intended to hide the facts.

No matter which of the above dirty tricks is employed, the bottom line is that you can’t afford to waste time on people who turn every conversation into a debate. If you value your time, you must learn to rise above the fray. And the best way I know to do that is to ask yourself if the resolution of this or that point of contention is really all that important in the overall scheme of things.

With very few exceptions, the answer is no. Always remember that a debater becomes impotent if he has no one with whom to debate, and you should make it a point never to volunteer to reinstate his virility. Whether or not you believe you are capable of outdebating someone should never be the issue. The real issue is, why in the world you would even care to try?

If you’re serious about getting to where you want to be in life, you simply don’t have time to be constantly debating anyone.

[Ed Note: Robert Ringer is the author of three #1 bestsellers, two of which have been listed by The New York Times among the 15 best-selling motivational books of all time. Through his books, articles, speeches, and seminars, he has helped more people transform their aspirations and goals into reality than perhaps any other author in history. His articles appear regularly in Early to Rise, A Voice of Sanity, WorldNetDaily, and numerous newspapers nationwide. Gain immediate access to A Dealmaker’s Dream and many bonuses for 66% off here.]
Posted in Careers, Productivity, Self-Improvement, Skill Development
This error message is only visible to WordPress admins