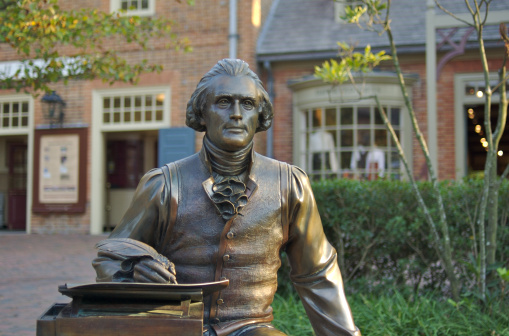 “Make your own Bible,” Ralph Waldo Emerson proclaimed in his Journals in 1836. “Select and collect all the words and sentences that in all your readings have been to you like the blast of a trumpet.”

He meant to encourage readers to follow the Renaissance practice of compiling favorite quotes, poems, letters, passages, and aphorisms into a Commonplace Book to be used for reflection and inspiration. But, while Emerson didn’t realize it at the time, Thomas Jefferson took this idea quite literally more than 30 years earlier.

In February 1804, President Jefferson sat in the White House with a copy of the King James Bible, a razor, a pair of scissors and a pot of glue. He was about to do something that would have shocked and outraged his contemporaries.

Jefferson believed that centuries of translation and transmission had left the Gospels with imperfect texts and contradictory dictates that left readers with a jealous and angry deity, magic and superstition, some deplorable ethical standards and embarrassing theological notions.

So he began cutting and pasting onto blank pages – in English, French, Greek and Latin – those verses of Matthew, Mark, Luke and John that he believed were supported by history, science and common sense.

It was a chronological story of the life of Jesus of Nazareth and his teachings. He included the Sermon on the Mount, the most memorable parables, and the admonitions to help the poor and love your enemies. He left out Jesus walking on the Sea of Galilee, turning water into wine, and feeding the multitudes with two fish and five loaves of bread. He struck out all the miracles, genealogy and prophecy, and excised every passage “of vulgar ignorance, of things impossible, or superstitions, fanaticisms, and fabrications.” Out went the angels, the virgin birth, and the resurrection.

Yet Jefferson was confident in his project, telling his friend John Adams that he found the true parts “as easily distinguishable as diamonds in a dunghill.” By March 10, his forty-six-page volume – The Life and Morals of Jesus of Nazareth – was completed.

Jefferson was a lifelong student of religion. One biographer calls him “the most self-consciously theological of all American presidents.” Yet he also was a great admirer of empiricists like Isaac Newton, John Locke, Francis Bacon, David Hume, and the mighty Voltaire.

It’s hard to reflect on Jefferson’s life without feeling like a bit of an underachiever.

But he was a man of contradictions. He wrote the Declaration of Independence but was a lifelong slaveholder. He insisted life in the spotlight did not suit him, but served as delegate to the Virginia General Assembly and to Congress, as Governor of Virginia, Minister to France, Secretary of State, Vice President, and President from 1801 to 1809. He was an advocate of strictly limited government but doubled the size of the United States with a swift purchase of the Louisiana Territory, a move many claimed was unconstitutional.

Jefferson was an autodidact, an avid reader in English, Spanish, French, Greek and Latin. His personal library – which later became the foundation of the Library of Congress – contained nearly ten thousand volumes. Many of these dealt with ethics and morality.

However, Jefferson insisted most religious doctrines served merely to prop up clergymen or those in power – recall that the King of England ruled by divine right – and prevented people from understanding the straightforward message of Jesus. He believed that obedience to the teachings of the Nazarene and reflection on the purity of his life would help citizens transcend their parochialisms and narrow self-interests.

In 1777, Jefferson composed the Virginia Statute for Religious Freedom, enacted a few years later by the Virginia House of Delegates. It was the first law in the history of the world to guarantee freedom of worship, protecting people of all faiths and those with no religion at all.

Jefferson himself was at least nominally Episcopalian. He was raised in the Church of England at a time when it was the established church in Virginia. He was christened in an Anglican ceremony and married by an Anglican priest. But his religious skepticism began at an early age. He questioned, for instance, why the creator of the universe would reveal himself solely to a small population in the eastern Mediterranean and leave the rest of the world in a spiritual void, ignorant of his existence.

Although he kept his personal beliefs private, he often spoke out against religious intolerance. In his Notes on the State of Virginia, first published in 1784, Jefferson argued that unorthodox beliefs and outright disbelief posed no threat to society. “It does me no injury for my neighbor to say there are twenty gods or no God. It neither picks my pocket nor breaks my leg.”

For this, Jefferson was denounced in the election of 1800 as an arch-infidel and a “howling atheist.” New England ministers warned that if elected, Jefferson would confiscate all Bibles and convert churches into temples of prostitution.

Hurt by these attacks on his integrity and character, Jefferson chose not to respond in public, but in a letter to his friend Benjamin Rush he wrote, “They believe that any portion of power confided to me will be exerted in opposition to their schemes. And they believe rightly; for I have sworn upon the altar of God, eternal hostility against every form of tyranny over the mind of man.”

Jefferson insisted that mystical revelations could not satisfy his questions. Only reason and evidence were reliable guides to an understanding of life and the natural world. He cast a skeptical eye on everything that smacked of superstition or the supernatural.

Jefferson’s bible was and is heretical to many. But it was the only form of Christianity he could embrace. Though he rejected the notion of revelation, he was not anti-religious. He found poetry in the Psalms, love in the Gospels and beauty in the Anglican hymns and liturgy.

Jesus himself wrote nothing, of course. And Jefferson felt his teachings had suffered badly at the hands of his editors. In particular, he believed that the apostle Paul was “the first corruptor of the doctrines of Jesus,” turning the religion of Jesus into a religion about Jesus. This, in his view, led to fanciful tales, dogma, and what he called “priestcraft.” Jefferson wanted to rescue Jesus from these distortions.

In his bible, he compiled the passages he believed were truthful to reveal a master whose “system of morality was the most benevolent and sublime… ever taught, and consequently more perfect than those of the ancient philosophers.”

Jefferson credited Socrates, Epicurus, Pythagoras, Cicero, Seneca, Epictetus and others with teaching followers to govern their passions. But he considered their views on our duties to each other to be sorely underdeveloped. He concluded that Jesus’s precepts were “the most pure, benevolent, and sublime which have ever been preached to man,” calling him the greatest moral philosopher and “the first of human Sages.”

While he showed The Life and Morals of Jesus of Nazareth to a few close friends, the book – which he had bound in red leather by a Richmond bookbinder – was never published during his lifetime. It served only as his private manual of devotion.

Today Jefferson is variously described as an agnostic, a Deist, a skeptic, a Unitarian, or a freethinker. But in another letter to Rush he wrote, “I am a Christian, in the only sense he wished any one to be; sincerely attached to his doctrines, in preference to all others; ascribing to himself every human excellence; and believing he never claimed any other.”

The Jefferson Bible – recently on display at the Smithsonian’s National Museum of American History and available for viewing online – is a book that has intrigued and outraged Americans ever since it was published by the National Museum in Washington in 1895.

For Jefferson, the subject of religion was fascinating, alarming, enraging and inspiring. He blithely predicted near the end of his life that reason would ultimately prevail and every young man in the country then living would die a Unitarian. He was spectacularly wrong about that, of course. But millions of educated Americans, Christian and Jewish and of no particular congregation, now hold similar views.

Jefferson was a champion of the primacy of reason and individual conscience, the cause of human rights, and the importance of education. He not only defined his own time but still shapes our understanding of freedom today.

In the Declaration of Independence, Jefferson declared that the American Republic was founded on universal principles, and was therefore most decidedly for export.

So were his views on individual conscience. For Jefferson, the greatest of all liberties is the freedom of the human mind.

[Ed Note: Alex Green is the author of excellent books like, The Secret of Shelter Island: Money and What Matters, and Beyond Wealth, that show you how to lead a “rich” life during trying economic times.]
Posted in Motivation, Self-Improvement, Skill Development
This error message is only visible to WordPress admins