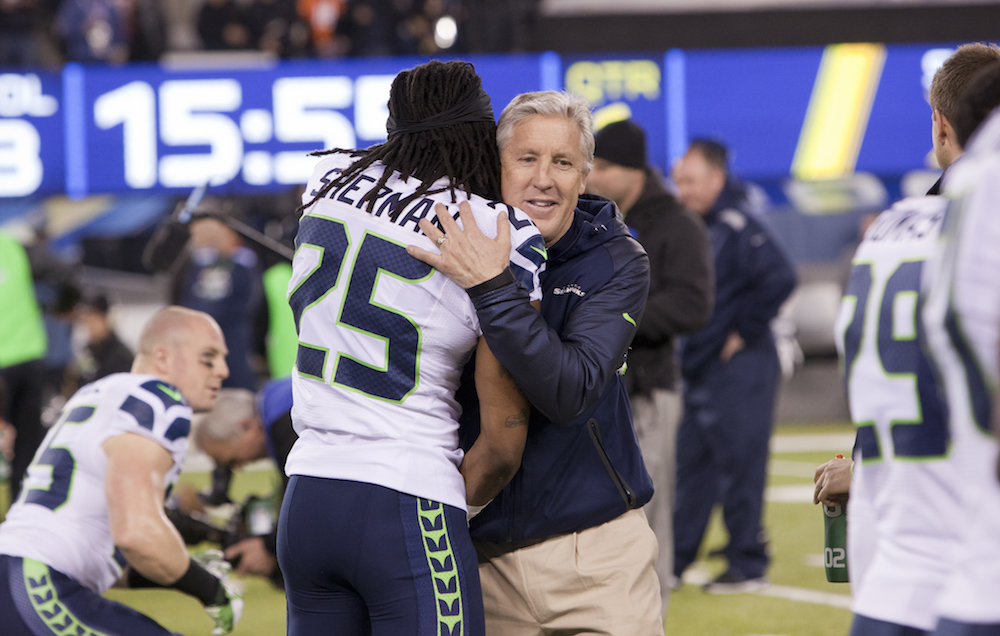 A few weeks ago, I had the privilege of interviewing Dr. Michael Gervais, co-creator of the popular Compete to Create training program with Seattle Seahawks Head Coach Pete Carroll.

He was reminiscing about the weeks the two of them shared leading up to football’s biggest game.

“It was about six weeks until our first Superbowl. Coach Carroll and I were standing in the tunnel at the training facility and he looks at me and asks, ‘Do you feel it? Do you feel what’s happening here?’ I nod. ‘It’s amazing. God, it feels good around here.’”

In that impactful moment by the field, Gervais recognized the incredible team culture Coach Carroll had created since taking over as head coach of the Seahawks in 2010. And Gervais knows what it takes to create that culture. He has led training of Olympic champions, CEOs, and, since 2012, the Seahawks themselves.

While the analogue of sports coaching is not new to the business realm, it continually offers insights into how business leaders can more effectively build internal system and procedures, and how these can be leveraged for increased profits.

In our interview, however, Gervais was more interested in company culture.

We started with a very basic question, but one often missed by frenzied entrepreneurs: What is company culture?

“Culture is the shared beliefs and attitudes of all team members—or, as Benjamin Hardy puts it, ‘a social construct’,” Gervais explains. “Most companies think culture is about rewards and punishments mixed together with titles and salary. While those things are important, culture must tap into a higher need level than simple rule-keeping and compensation. Once basic needs are met and process is in place, rules and money no longer serve to keep a team together.”

Gervais elaborates: “A successful culture taps into what psychologist Abraham Maslow described as ‘esteem needs.’ Esteem needs are met when one feels a sense of connection and meaning as part of a group. It’s the step right before self-actualization.”

Admittedly, Gervais says, culture is intangible—you can’t see it, you can’t touch it, and you sure as hell can’t buy it. But as nebulous as culture is, it can be a competitive differentiator in a big way. Organizations can double the earnings (or more) when their employees are engaged in company growth and happy with their work environment.

Benefits go beyond the bottom line, too. “Employee retention rate, average absenteeism, and product quality are also affected by a positive company culture.” Why? Because, avers Gervais, when employees enjoy positive experiences with a company, they remain present and committed to quality. They are personally and professional invested in the company’s success.

Perhaps this stands to reason, but even if entrepreneurs and CEOs know culture is key to their success, few seem to know how to go about creating the right one.

That’s where Gervais comes in. Leveraging his experience in occupational and competitive psychology—and his experience with Carroll’s Seahawks—he offered these three keys to exceptional company culture:

Can you say the same about your business?

When someone asks you what your company believes, what would you tell them? And could you articulate it in a single sentence?

If not, then it’s time to do some drafting. Build your philosophy like a bulleted list. What are the three most important missions/goals of your company? Bring these together in a single, cohesive philosophy. Frame it and put it on the wall. Share it by email with each of your team members. Remind them of your corporate philosophy via meetings, regular communications, company events, and performance reviews.

Need some inspiration? Here are top mission statements and philosophies from across the digisphere.

“A successful culture taps into what psychologist Abraham Maslow described as ‘esteem needs.’ Esteem needs are met when one feels a sense of connection and meaning as part of a group. It’s the step right before self-actualization.”

Coach Carroll puts a heavy emphasis on helping each member of his team be the best that they can possible be—both personally and professional. The rest, he says, falls into place.

But Gervais adds another piece to the people puzzle: Spend time nurturing your team by supporting their physical, mental, and creative development. He calls this “Body, Mind, Craft.”

As one might assume, the “Body” component of Gervais’ approach is about sustaining physical wellbeing.

Both he and Carroll put a lot of effort into ensuring Seahawks’ players are eating well, getting enough sleep, and exercising in a way that is not only beneficial to the team, but to the players’ health.

In a business environment, the same “Body” approach has similar application. No one is expecting you to keep up with your employees’ sleep schedules, but there are ways to ensure physical wellbeing is a top priority. If you see an employee’s work slumping, invite them in for a one-on-one meeting and ask (gently) if anything at work is affecting their health. Make it known that you are concerned about their wellbeing.

If there are, in fact, work factors that are contributing to poor sleep or unhealthy eating—or making it difficult for your team to get ample exercise—then make changes to structure and process. Offer subsidized gym memberships. Lead group yoga exercises before work. Organize work field trips that are active and engaged. Give team members extra time off after a big project to recuperate.

The “Mind” component of Gervais’ approach is where the doctor’s skills really come in handy building players’ concentration.

Regularly, Gervais meets with team members to practice focus exercises that allow them to tune out distractions and concentrate on a single task or subject. Some of that is designed for sustained superficial recognition of an object—a football as it flies across the field, for instance. But there is also a great deal of energy devoted to deep self-awareness—an exercise in focusing on the present moment and one’s entire state of being.

“When we know ourselves that deeply,” Gervais asserts, “we are truly able to build flow of energy and intent. This is the foundation of our peak state, and the only way to catalyze our best work.”

On the business side, Gervais suggests a combination of focus and awareness exercises. For some, at-desk meditation is a good way to cut the flow of distractions and stress during the day. An uncluttered workplace is also key. But perhaps the best way to encourage company awareness is by creating forums for discussions and feedback. These should be constructive, not merely critical, and led by a positive team leader. If there is a pervasive problem—too many distracting emails or phone calls, for instance—float the idea of time blocks for productivity. For example: For certain hours of the day, internal calls/emails would be off-limits, allowing the team to focus on project work without interruption.

This is the actual skill work or technique required to perform one’s job. On the field, the skill is evident: throwing, kicking, running, catching, etc. That’s where Carroll’s deft team of coaches and trainers come into play.

But the same tack can be used in business. “Each role in a company can be performed at various levels of excellence,” Gervais explains. “To improve an individual’s performance in their given role, take the time to break down the required skills into micro-skills.” Why? Rather than suggesting an area of improvement like “communication” for an employee—offering no practical ways to hone that skill—suggest definable micro-skills that allow for clear action and give the team member something relatively concrete to focus on.

For instance, for employees who do struggle with communication, suggest that they focus on honing diplomatic language in internal emails, responding to VMs within 24 hours, and so on. When these are compiled and reviewed during one-on-one meetings, you can see the overarching change. Recognizing this will build morale and let the employee know that you care about their growth and success.

“Body, Mind, and Craft” are all equally important, argues Gervais, but so is the amount of time you spend on each one. It’s not a “one and done” kind of thing. Like any successful steps toward improvement, these investments require ongoing attention and effort—both on the part of the employees and the managers.

3. Let Your Team Be Creative

If you don’t spend time each day creating ideas, your idea muscle will atrophy. Whether you’re mapping out new plays on the field or brainstorming approaches to a new project, creativity is key to success.

The biggest mistake business leaders make is not stifling creativity, but not making time for it. Set aside time for teams to brainstorm new ideas—no holds bar—and compile these ideas for consideration. Giving everyone a voice in this process reinforces the team conntectedness and strengthens the bonds of employees.

It also reinforces the team’s commitment to the company philosophy and mission. So take time once a week or once a month to imagine the next product or service for your company. Ask your team to think of new sales tactics, marketing campaigns, PR strategy—even company culture events.

At the end of the day, your company is nothing without your team. You trust them to build your products, serve your customers, deliver your services, and grow your brand. Why wouldn’t you let them invest their vast experience and perspective in the next successful chapter of your company?

As many Seattlites hoped, the Seahawks took home the Superbowl trophy in 2013. It was a monumental achievement. But even greater than the trophy was what it represented: A team nurtured by its coaches and a culture that would take it from one championship to the next, win or lose.

When Carrol crafted the team philosophy—”Always compete. Win forever.”—he wasn’t only eying a Superbowl victory. He was laying claim to a team culture constantly committed to betterment (the ultimate “win”) and a competition against mediocrity.

As Gervais made abundantly clear, he has absolutely succeeded.

Get the Tools You Need for Effective Management

Ryan Warner is the co-host of TR Talk Podcast, which interviews leaders in their fields to learn how millennials can fast-track their personal development. Guests have included former NFL players, NBA champions, Olympic gold medalists, CEOs, and New York Times best-selling authors. Ryan is also an account executive on Salesforce’s financial services team. You can subscribe to the podcast here and connect with Ryan through Twitter (@Ryan_N_Warner).