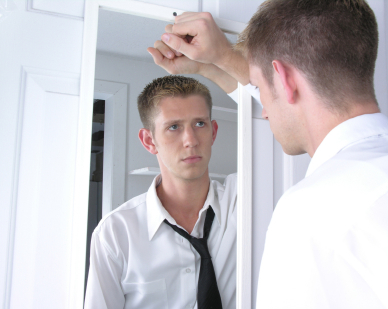 My friend JL has something to smile about. He lives in a beautiful home, complete with a swimming pool. And he is well on his way to success as a partner in a profitable (and rapidly growing) talent booking agency. That is an extraordinary change, considering how dire his circumstances were just one year ago. He had just been evicted from his apartment, had lost his job, his truck needed a repair that he couldn’t afford (and that would cost more than the truck was worth), and he wasn’t even close to achieving his professional goals.

JL took the first critical step toward getting himself out of this mess by performing something I call a “Cumulative Appraisal” of his situation. After doing so, he had to accept the fact that he hadn’t lost his apartment because of a mean landlord. He’d lost it because he hadn’t saved any money when he had a good job. And he wasn’t anywhere near his dream of being successful in the entertainment business because he hadn’t done much to make it happen.

Once JL saw his situation with clarity, he was able to formulate a plan to change it.

Making an accurate appraisal of where you are right now in regard to actually living your dreams takes more than simply saying, “Well, let’s see … I work in an office as a clerk, but my dream is to be president of a Fortune 500 company. So I guess I’m not there yet.”

That’s simply not enough information to enable you to make meaningful changes in your life. In order to truly change direction, you must take some radical actions.

Momentum is a powerful force in physics… and also in your life. If, for example, you are on course to work in a large company as a low-level administrator, you continue to be propelled in that direction by momentum. Factors in that momentum include the way you get supervisors to perceive you, the set of skills you acquire, and your behavior patterns.

That is why the Cumulative Appraisal is so important. It compels you to dig deeper and identify the true reasons your life has taken the wrong direction. Facing those reasons isn’t a lot of fun … but it is necessary.

When I was very young, one of my strong interests was to become an actor/comedian. Yet, by the time I was in my 30s, I hadn’t done anything about it. It would have been easy for me to tell myself that it was because I was so busy with other goals. But that wasn’t the truth. The truth was that I was afraid of going on stage and having people not like me.

Once I accepted that reality, I was able to find a solution to my problem. I created a “comedic character” for myself that made it easier for me to give comedy a try. When I had enough experience and confidence, I gave up the character and revealed my true self to the audience. Since then (I’m proud to say), I’ve appeared as an actor in several large movies, on stage as a stand-up comedian, and as a member of a sketch comedy group.

Now, your circumstances are probably entirely different from what mine were. But if you don’t identify the true reasons that have prevented you from living your dreams, you won’t be able to overcome the tremendous force of momentum pushing you down the wrong life path.

Are you ready to make your own Cumulative Appraisal and start turning your life around? Here’s how to get started.

This step is not easy for most people, because it’s natural for us to minimize our shortcomings. Let me share an example.

My close friend DM spent his mid-20s telling himself that he was just one step away from catching that big break … or moments away from being able to jump into another career or a business of his own.

But that wasn’t the case. He was just in a job that he hated – a job with no future. He had no specific life goal, much less a well-planned strategy to change his situation. Until he took a realistic look at where he was and where he was headed, he was stuck treading water.

Once DM finally realized that he was staying with his job because he had a lack of self-confidence, he was able to change things for the better.

After completing the Cumulative Appraisal, he realized that he’d built up some substantial managerial skills. With a new perception of himself, DM found the courage to launch his own business. Now, instead of punching a time card and making just enough to get by, he owns two very successful companies, an exotic sports car, and several properties (including a luxury home in an exclusive neighborhood). And he and his wife enjoy traveling all over the world.

While there are times to put a “positive spin” on things, you don’t want to sugarcoat your Cumulative Appraisal. You need to be brutally honest with yourself. It’s not always easy to accept reality – but console yourself by remembering that any negative life circumstance can be changed.

When you’ve determined where you truly are, you’ve got to figure out where it is you want to go. It’s easy for some people to pinpoint their dreams. But others may not know for sure what would make them happy. All they know is that they don’t like what they’re currently doing.

To determine what you would really like to do, ask yourself, “If I had a $50 million windfall – and never again had to work to support myself – what would I like to do?” The answer to that question is very likely the dream that you should pursue.

Be very specific – and realistic – about your dream. The first part of your Cumulative Appraisal will give you an accurate picture of your strengths and weaknesses. So if, for example, you’re a heavy-set man in your late 40s, don’t say, “I’d like to be a leading man in action movies.” That’s not realistic.

But you can still be a movie star. You just need to “tweak” your dream a bit. Perhaps you could say, “I want to be a character actor who works regularly in film and television.” That’s possible. And then, with this specific goal in mind, you could figure out what specific actions you need to take to achieve it. You might, for example, decide you need to move to Los Angeles and enroll in acting school.

The point is, you’ve got to take action based on an understanding of who you are now, how and why you got here, and your (very specific) dream. Completing these two steps will make that possible.

Time is the one commodity you have that is truly limited. If you aren’t living your dreams now, I strongly urge you to change your life for the better. Believe me … I’m living proof that it can be done.

[Ed. Note: Paul Lawrence truly is living his dreams. He is a produced screenwriter who has written a multimillion-dollar film. He’s signed a development deal with one of the entertainment industry’s largest producers to executive-produce a television show, has sold another feature film script slated for a 2007 theatrical release, and is the president of a successful direct-mail company. Learn about Paul’s “Dare to Live Your Dreams” program on his website]
Posted in Motivation, Self-Improvement and tagged business, goal setting, guidance, opportunity
This error message is only visible to WordPress admins