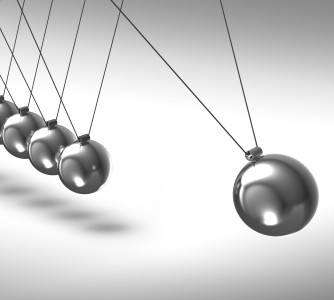 I have long believed that the difference between success and failure — in any area of life — is not nearly as great as most people might suspect. And as the years have passed, I have become increasingly convinced that action is perhaps the single biggest factor when it comes to determining how an individual’s life plays out.

“Nothing happens until something moves” are the words of the greatest scientific mind of the twentieth century, Albert Einstein. The Theory of Relativity may have been Einstein’s most important contribution to science, but these five simple words — nothing happens until something moves — comprise his most important contribution to me.

While Einstein’s observation is an indisputable scientific fact, there is no doubt in my mind that it applies to all other aspects of life as well. Ideas can be precious commodities that can change the world; sound preparation is invaluable; and knowledge and wisdom are essential when it comes to giving one an edge in the pursuit of great achievements.

But ideas, preparation, knowledge, and wisdom are all but useless without action, because action is the starting point of all progress. In other words, an idea, of and by itself, has no intrinsic value. It must be accompanied by action. It is action that cuts the umbilical cord and brings an idea out of the womb.

Fred Smith, founder of Federal Express, wasn’t the only person to come up with the idea of starting an overnight delivery service to compete with the woefully incompetent U.S. Postal Service. The reason I know this is because I myself thought about the same concept for years, especially whenever I would have to send a secretary cross-country to hand deliver a document that needed to be in someone’s office the next morning.

Further, I do not for a second believe I was the only other person to ponder the idea of an overnight mail-and-package delivery service. In fact, I would be surprised if literally thousands of other entrepreneurs weren’t simultaneously mulling over the same idea before Fred Smith came along.

What made Smith different from the rest of us was that he didn’t just think about the idea; he took action. Action converts an idea into an experience. Action creates reality. In Fred Smith’s case, he brought his college thesis on the subject to life by applying action to his written words.

The same story has been repeated thousands of times through the years. To give a more recent example, I doubt that Jeff Bezos was the first person to envision a business like Amazon.com. Talk about a simple idea. What could be more simple, more obvious, and more dull than selling books on the Internet?

And once he took the plunge, Bezos did not allow a little problem like not making a profit for years slow him down. Instead, he kept taking action on two fronts: increasing Amazon.com’s greatest asset — its customer base — and repeatedly convincing Wall Street to invest more millions of dollars in that asset. If you’ve ever tried to raise additional capital for a money-losing venture, you can appreciate the enormity of Bezos’s feat.

As a final example, I recall some years back watching what appeared to be a rather uninspiring interview with singer/songwriter Paul Simon of Simon and Garfunkel fame. Simon had just come out with a new album based on the tribal sounds of Africa. The interviewer asked Simon how he felt about the pounding he had been taking from critics in the industry whose position was that “anybody could have taken existing African sounds and packaged them into an album.”

His bland response to the interviewer’s question was, “Maybe it’s true that anyone could have done it, but I did it.” On the surface, Simon’s retort seemed to be rather unremarkable, but it had such a major impact on my thinking that I have quoted his words scores of times over the years.

The moral is self-evident: It’s not what you can do that counts; it’s what you actually do.

Nolan Bushnell, founder of Atari Computer, put it bluntly when he said, “The critical ingredient is getting off your butt and doing something. It’s as simple as that. A lot of people have ideas, but there are few who decide to do something about them now. Not tomorrow. Not next week. But today. The true entrepreneur is a doer, not a dreamer.”

Translation: The successful implementation of one good idea is worth more than a thousand good ideas not acted upon.

As I have become ever more fascinated with the power of action, it has become apparent to me that the very essence of life is action. On the other hand, inertia — resistance to action — is anti-life.

You’ve probably heard the following parable, but it is so profound that I feel obliged to repeat it.

Every morning in Africa, a gazelle wakes up. It knows that it must run faster than the fastest lion or it will be killed.

Every morning in Africa, a lion wakes up. It knows that it must run faster than the slowest gazelle or it will starve.

It doesn’t matter whether you’re a lion or a gazelle; when the sun comes up, you had better start running.

As human beings, we find that we, too, had better start running at the crack of dawn if we’re serious about making life a meaningful journey. A stress-free life sounds nice in theory, but in reality there is an inherent urgency to life.

For one thing, life is finite, and you don’t even have the advantage of knowing when your finite supply of time will run out. Second, life is competition. No matter what the situation, you’re always competing with other human beings.

You compete in business, you compete for a prospective spouse, you compete for attention from others — you constantly compete in numerous ways that you don’t even think about. So if you don’t want the competition to leave you in the dust, it’s imperative that you focus on taking action. Remember, you can’t coast. You’ve got to make progress every day of your life.

We would all do well to heed Mark Twain’s warning: Twenty years from now you will be more disappointed by the things that you didn’t do than by the ones you did do.

[Ed. Note. If you’re ready for a treasure chest of proven ideas, strategies, and techniques that are guaranteed to dramatically improve your dealmaking skills – and, in the process, increase your income many times over – you won’t want to miss Robert Ringer’s bestselling audio series, A Dealmaker’s Dream.

Robert Ringer is a New York Times #1 bestselling author and host of the highly acclaimed Liberty Education Interview Series, which features interviews with top political, economic, and social leaders. His recently released work, The Entrepreneur: The Way Back for the U.S. Economy, shows the pathway back to prosperity paved by entrepreneurs. Ringer has appeared on numerous national talk shows and has been the subject of feature articles in such major publications as Time, People, The Wall Street Journal, Fortune, Barron’s, and The New York Times. To sign up for his e-letter, A Voice of Sanity in an Insane World, visit www.robertringer.com.]