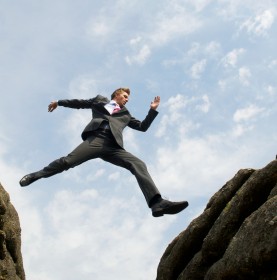 Miyamoto Musashi was one of the biggest badass swordsmen of 16th century Japan. He also wrote of one of the greatest books on tactics, strategy and philosophy ever written—A Book of Five Rings.

Musashi knew what most modern success gurus can’t seem to figure out: success takes a lot of hard work. And the key to making your goals a reality is massive action.

That’s the greatest difference between those who live their dreams and those who WISH for stuff. Hard work. We all know this. So here’s the question for you…

If you know what you want and you know you have to take action to get it, why aren’t you doing it?

I’ll bet it has something to do with fear.

Oh, sure, you’ll tell yourself it has nothing to do with being afraid. There are a thousand ways to rationalize your lack of action. You want to get in shape but you don’t have all the right foods in the fridge yet. You want to buy those new running shoes before you start exercising. You just need to wait until things are quiet at work before you start learning that new language.

I bet at least a couple of those sound familiar.

It’s EASY to find an excuse NOT to take action…

But the real reason you don’t make progress is something else entirely. You’re scared of the hunger and deprivation that might result from changing your eating habits. You’re afraid of missing out on your favourite TV show if you start using those Spanish language CDs. Or maybe you’re just worried you’ll disappoint yourself again by quitting your new workout right after you start.

No matter what it is, I guarantee there’s some sort of fear lurking beneath whatever justification you’re giving yourself for not taking massive action on your goals today.

And I want you to know that it’s completely okay.

Fear goes hand in hand with success. You’ll never unlock your potential if you hide within the shell of your comfort zone.

Here are my 5 keys to dominating fear and taking massive action to achieve your dreams:

The first secret to overcoming your fear is to put it into perspective.

Think back to a time when you were scared out of your wits to do something. I bet once that mission was accomplished, you felt great about the outcome—and maybe even a little silly about being so scared in the first place. Take some time with pen and paper to make a list of all those experiences. And the next time you’re having trouble getting out of your comfort zone, look back at that list for inspiration.

Okay, so you’ve managed to put your fear into perspective. The next thing is to just take that first step. As Lao Tzu so eloquently put it, “The journey of a thousand miles begins with a single step.”

I’ll give you a personal example. I’ve wanted to learn Spanish for years. I’m a native English speaker, and during my years in Quebec I’ve become fluent in French. But my travels have taken me to a number of Spanish speaking countries recently, and I’ve always regretted not being able to converse in the local language.

After a recent trip to the Dominican Republic, I decided enough was enough. It was time to take action! I did a little research, and I ordered the very best Spanish language home-study course I could find: the Pimsleur Approach.

That was my first step. Sure, it took a lot of effort to overcome years of procrastination, justification, laziness and FEAR. What was I afraid of? Lots of things… Giving up my spare time, not being “smart enough” to learn the language, making a fool of myself the first time I actually tried to speak, and wasting time on a course that wouldn’t work. But none of that stuff is real.

So yeah, I received the course just this week. Now what?

Yep, you guessed it. On to step 3: Put one foot in front of the other—do the WORK. But we’ll talk about that in a future article.

Before you go there, I want you to do some homework. What’s one small step that you can take towards your big dream goal? Figure out what that is and just TAKE IT.

Put one foot in the door and the rest will eventually follow. Sure, you might falter a bit in the beginning. But if you never take that first step, you won’t get anywhere—ever.

[Ed. Note: Adam Steer is coauthor of the Shapeshifter Body Redesign program. When not helping people rediscover the body of their glory years, he’s following through with his goal of studying Spanish.]
Posted in Motivation, Self-Improvement and tagged excuses, fear, procrastination
This error message is only visible to WordPress admins