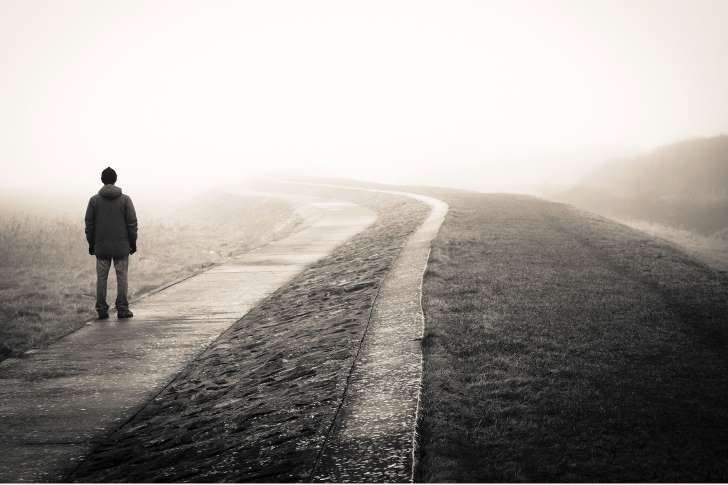 Something strange happens to men in middle age. Not all men. Many sail serenely through middle age with no issues at all. That’s fine. I’m very pleased for them. Couldn’t be more thrilled. Really. For the rest of us, middle age is a more turbulent sea. The German term for ‘mid-life crisis’ is Torschlusspanik – ‘shut-door-panic’. And lots of men in their forties and fifties feel that the door has closed.

The ageing process doesn’t help . Aches and pains used to disappear quickly, now they hang around for months. Hair no longer grows on the head, you can’t stop it growing out of your ears. You can’t sit down, stand up, or pick up any object without emitting an accompanying grunt. But it’s not the age, it’s the anxiety; those ‘dark nights of the soul’, staring at the ceiling, pondering the ultimate question of middle age: ‘Is that it?’

The ubiquity of these feelings is why David Nobbs, who died this week, was able to create such an enduring character in Reggie Perrin, the corporate man trapped in a meaningless life. “One day I’ll die,” says Reggie, during a seminar on instant puddings, “and on my grave it will say: ‘Here lies Reginald Iolanthe Perrin. He didn’t know the names of the trees and the flowers, but he knew the rhubarb crumble sales figures for Schleswig Holstein.’”

Reggie, of course, faked his own death to break free, only to find his new life wasn’t any better. Other men make less drastic attempts to escape. Some take up the triathlon and wear unfeasibly tight Lycra . “I want to prove that I can still do it,” said a marathon running friend. “I’m fitter than guys half my age.” Some change their appearance. The jeans grow tighter than their lycra. A tattoo appears. Then there’s the sports car because they think that buying something will cure their sadness. But they end up just as unhappy, but at a higher speed.

When the shut-door panic hits, we all look for the ways out. Me? At the age of 54, I built a shed . Well, I say ‘built’. I turned the rickety, run-down structure in the garden of the house I share with my wife and three daughters into a place where I could work. As a writer this was my ‘Porsche’. All the great writers had sheds: Dylan Thomas, Roald Dahl, George Bernard Shaw. But more than that, I wanted a place where I could process all the stuff I was going through. And the book that emerged I called The Dark Night of the Shed – a book which turned out to be an exploration of men, midlife, spirituality and, of course, sheds. As my previous books are mainly about biblical history, this proved to be something of a departure, although the history of the midlife crisis goes back further than you might think.

The first recorded use of the phrase ‘middle age’ can be found in William Langland’s poem Piers Plowman. Written in 1400, a man falls asleep and dreams of a quest to find the purpose of life – at one point he meets ‘Imagination’, who advises him to ‘make amends in middle age before your strength fails’. What could be more midlife than this? It’s about changing your life and finding a purpose. And it begins with a long nap.

For the first serious analysis of the problems of middle age, we have to fast forward to the early twentieth century. Carl Jung – who had a significant midlife breakdown of his own – argued that life was a game of two halves. The first half is about achievement: building a career, a home, a useful place in society. But the second half is about becoming a whole, well-rounded person. Jung saw middle age not as a time of decline, but as crucial stage in developing wholeness and maturity. A similar idea lay behind the thinking of the psychologist Elliot Jacques , who, in 1965, first coined the phrase ‘mid-life crisis’. Jacques examined the work of over 300 major artists, before and after the ages of 35 to 39 and observed that the ‘hot from the fire’ creativity of their youth was replaced by a more mature, ‘sculpted creativity’. He concluded that the transformation was caused by a ‘mid-life crisis’ or the sudden realization that, sooner or later, you were going to pop your clogs.

Studies show that in our forties and fifties levels of happiness and life satisfaction dip to their lowest levels psychological distress is at its height. Forty-five is the most common age for depression to be diagnosed. This is a complex situation with many factors, but in my many conversations with ‘men of a certain age’, I sensed an underlying lack of meaning and purpose, and a sense of having failed in some way.

Many of them had spent their life climbing the corporate ladder only to find out it was leaning against the wrong wall. At one event where I was speaking, I met a judge. He’d spent his life striving to reach that position, only to find that, when he got there, he felt as empty as ever. Another friend returned from a long career teaching overseas. He saw a TV advert featuring men admiring their DIY handiwork and saying, ‘I did that.’ He burst into tears: he felt there was nothing in his life of which he could say, ‘I did that.’ He was wrong. But it didn’t feel that way.

In Arthur Miller’s play The Death of a Salesman, Willy Loman’s son Biff cries out at his funeral, “He had the wrong dreams… He never knew who he was.” (Miller, by the way, wrote that play in a shed, which he had built himself.) But that’s the issue: many of us have the wrong dreams. We don’t need a new Porsche, we need a new purpose.

As I rebuilt my shed I came to the conclusion that the problems of middle age are spiritual . I realize we live in a time when spirituality is as unfashionable as flared jeans and sideburns. But sod that. I’m middle aged. I’m allowed to be unfashionable. ‘Is that it?’ is a great question if we have the courage to really try and answer it.

Midlife is a time when we should have the confidence to be honest with ourselves. But it’s up to you. You can remain a grumpy old git, a simmering mass of sadness and anger and loss. You can blame the whole thing on other people and run away to repeat the whole process with someone new. Or you can find a new meaning and purpose.

For me, I’ve experienced a deepening of my faith. I had become a kind of Reggie Perrin Christian – faithfully attending the company meetings, but increasingly thinking, ‘Is that it?’ and longing for something deeper – a mid-faith crisis, if you like. The shed became a cell, a sanctuary – a kind of home-made chapel where I go most mornings for a time of quiet contemplation. To know that I am loved, that my life matters, and that I have a purpose puts all the anxieties of midlife into their proper perspective.

As the Psalmist says, ‘Even though I walk through the valley of the shadow of the death, I will fear no evil. Because I’ve got a really good shed.’

Our reactions slow with age. But speed is over-rated. Cognitive tests involving verbal skills, spatial perception, mathematics, reasoning and planning, show that our brains are actually better in middle age. Mathematical skills peak around 40, verbal skills around 60. In your face, reflexes!

Older people simply know more than younger people. We know how to do things right – mainly from a lifetime of doing things wrong. Age doesn’t grant automatic wisdom – I have met many very old, very stupid people – but at least we’ve been there, done that and built the shed.

My younger friends talk about the stress of worrying what other people think of you. But the older you get you realize (a) they probably don’t think that and (b) they’re probably not thinking about you anyway.

There is a lot to be said for ‘counting your blessings’. And with age comes experience, some times terrible experiences which you can be thankful aren’t yours. You are not living in a war zone, you probably have enough to eat and a roof over your heads; Great British Bake Off is on TV. All reasons to be cheerful.

Lives are noisy. We are assaulted by media, and trapped by the to-do list. When you are older you appreciate quietness and solitude. You know this is what will refresh and renew you.

Get updates on living the good life delivered to your inbox.
Posted in Articles, Self-Improvement
This error message is only visible to WordPress admins